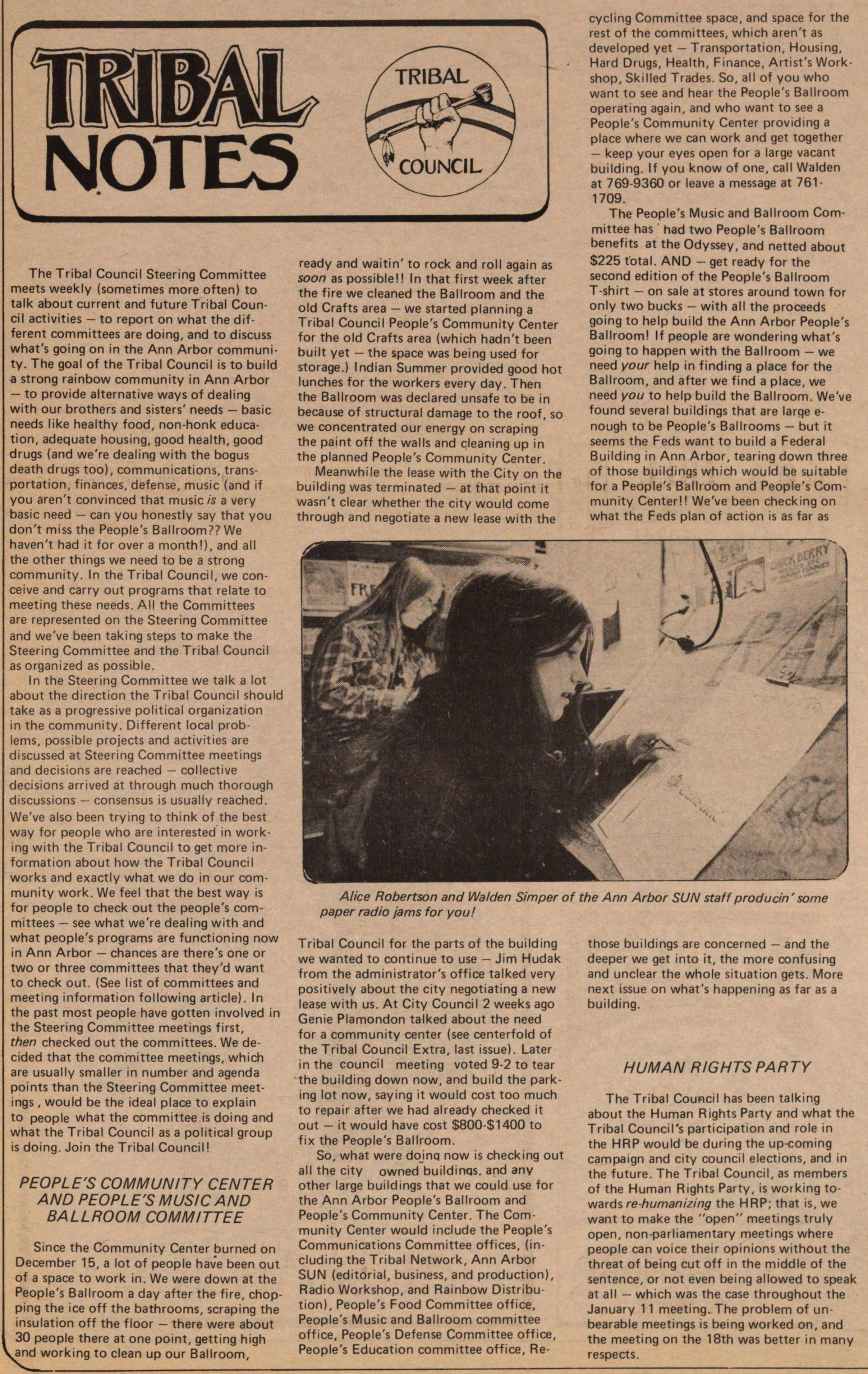 Since the Community Center burned on December 15, a lot of people have been out of a space to work in. We were down at the People's Ballroom a day after the fire, chopping the ice off the bathrooms, scraping the insulation off the floor - there were about 30 people there at one point, getting high and working to clean up our Ballroom, ready and waiting to rock and roll again as soon as possible In that first week after the fire we cleaned the Ballroom and the old Crafts area - we started planning a Tribal Council People's Community Center for the old Crafts area (which hadn't been built yet - the space was being used for storage.) Indian Summer provided good hot lunches for the workers every day. Then the Ballroom was declared unsafe to be in because of structural damage to the roof, so we concentrated our energy on scraping the paint off the walls and cleaning up in the planned People's Community Center.

Meanwhile the lease with the City on the building was terminated - at that point it wasn't clear whether the city would come through and negotiate a new lease with the Tribal Council for the parts of the building we wanted to continue to use - Jim Hudak from the administrator's office talked very positively about the city negotiating a new lease with us. At City Council 2 weeks ago Genie Plamondon talked about the need for a community center (see centerfold of the Tribal Council Extra, last issue). Later in the council meeting voted 9-2 to tear the building down now, and build the parking lot now, saying it would cost too much to repair after we had already checked it out - it would have cost S800-S1400 to fix the People's Ballroom.

The People's Music and Ballroom Committee has had two People's Ballroom benefits at the Odyssey, and netted about $225 total. AND - get ready for the second edition of the People's Ballroom T-shirt - on sale at stores around town for only two bucks - with all the proceeds going to help build the Ann Arbor People's Ballroom! If people are wondering what's going to happen with the Ballroom - we need your help in finding a place for the Ballroom, and after we find a place, we need you to help build the Ballroom. We've found several buildings that are large enough to be People's Ballrooms - but it seems the Feds want to build a Federal Building in Ann Arbor, tearing down three of those buildings which would  be suitable for a People's Ballroom and People's Community Center!! We've been checking on what the Feds plan of action is as far as those buildings are concerned - and the deeper we get into it, the more confusing and unclear the whole situation gets. More next issue on what's happening as far as a building.