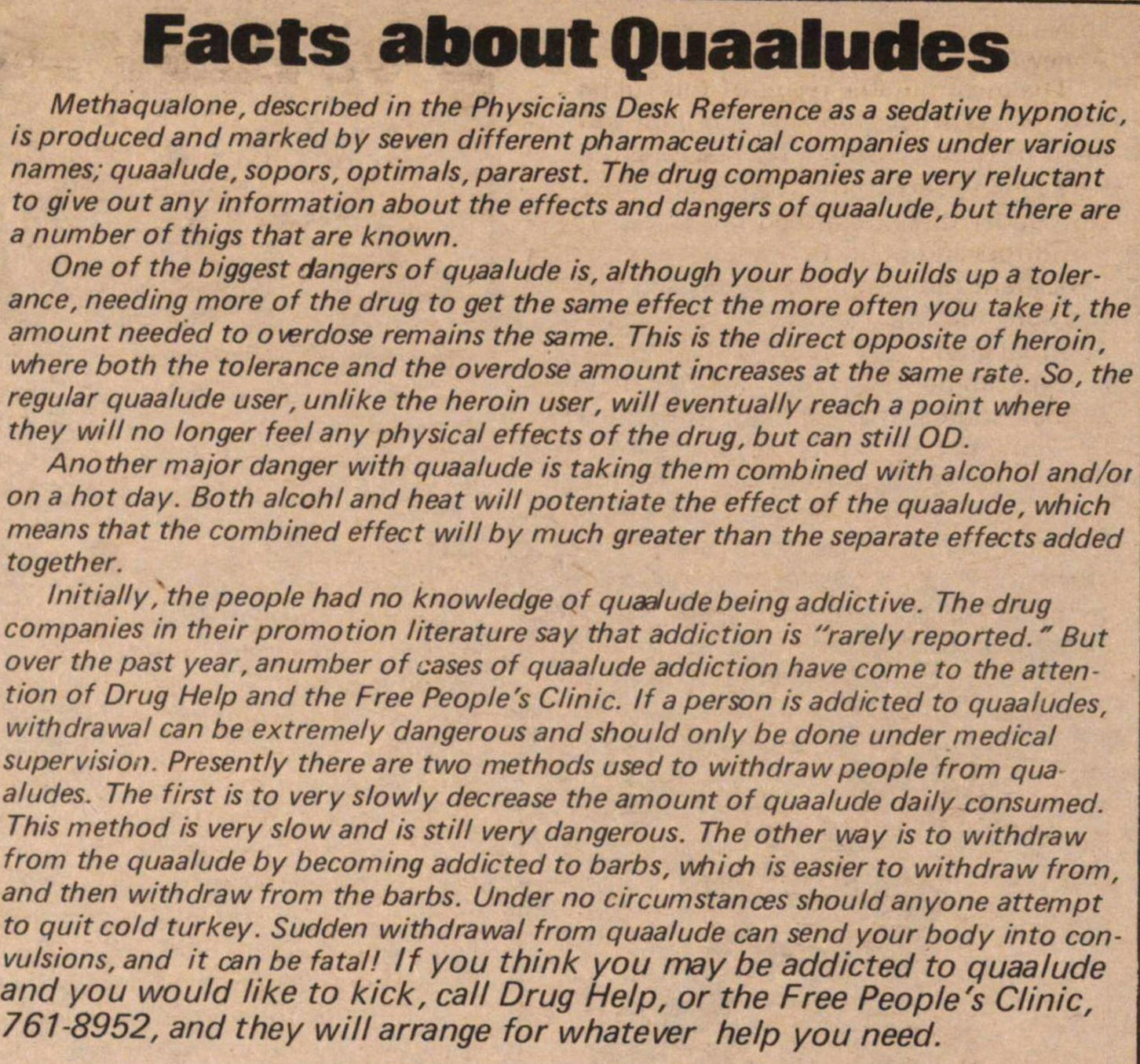 Methaqualone, described in the Physicians Desk Reference as a sedative hypnotic, is produced and marked by seven different pharmaceutical companies under various names; quaalude, sopors, optimals, pararest. The drug companies are very reluctant to give out any information about the effects and dangers of quaalude, but there are a number of things that are known.

One of the biggest dangers of quaalude is, although your body builds up a tolerance, needing more of the drug to get the same effect the more often you take it, the amount needed to overdose remains the same. This is the direct opposite of heroin, where both the tolerance and the overdose amount increases at the same rate. So, the regular quaalude user, unlike the heroin user, will eventually reach a point where they will no longer feel any physical effects of the drug, but can still OD.

Another major danger with quaalude is taking them combined with alcohol and/or on a hot day. Both alcohol and heat will potentiate the effect of the quaalude, which means that the combined effect will by much greater than the separate effects added together.

lnitially, the people had no knowledge of quaalude being addictive. The drug companies in their promotion literature say that addiction is "rarely reported. " But over the past year, a number of cases of quaalude addiction on have come to the attention of Drug Help and the Free People 's Clinic. If a person is addicted to quaaludes, withdrawal can be extremely dangerous and should only be done under medical supervision. Presently there are two methods used to withdraw people f rom quaaludes. The first is to very slowly decrease the amount of quaalude daily consumed. This method is very slow and is still very dangerous. The other way is to withdraw f rom the quaalude by becoming addicted to barbs, which is easier to withdraw from, and then withdraw from the barbs. Under no circumstances should anyone attempt to quit cold turkey. Sudden withdrawal from quaalude can send your body into convulsions, and it can be fatal! if you think you may be addicted to quaalude and you would like to kick, cali Drug Help, or the Free People's Clinic, 761-8952, and they will arrange for whatever help you need.