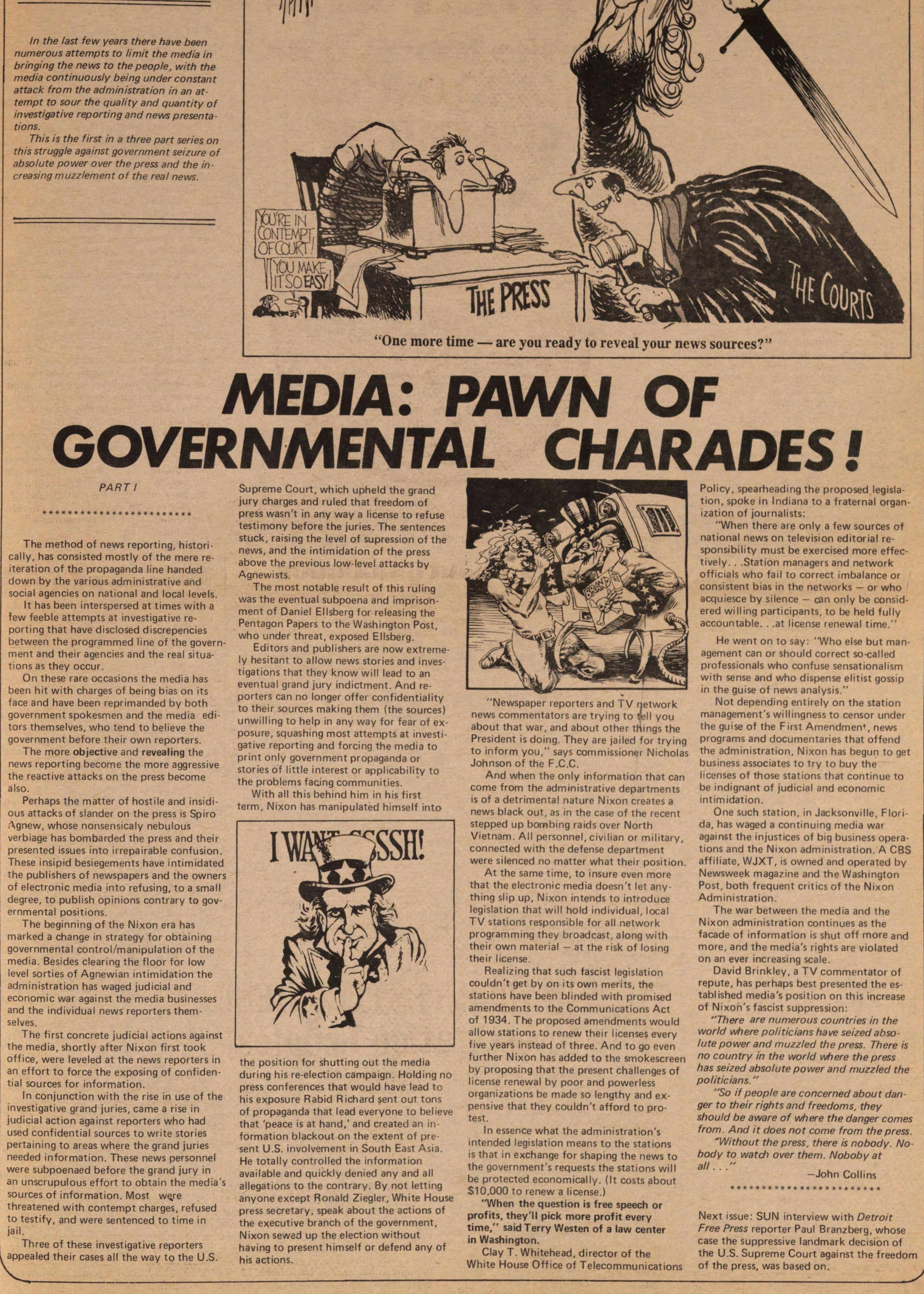 In the last few years there have been numerous attempts to limit the media in bringing the news to the people, with the media continuously being under constant attack from the administration in an attempt to sour the quality and quantity of investigative reporting and news presentations.

This is the first in a three part series on this struggle against government seizure of absolute power over the press and the increasing muzzlement of the real news.

The method of news reporting, historically, has consisted mostly of the mere reiteration of the propaganda line handed down by the various administrative and social agencies on national and local levels.

It has been interspersed at times with a few feeble attempts at investigative reporting that have disclosed discrepancies between the programmed line of the government and their agencies and the real situations as they occur.

On these rare occasions the media has been hit with charges of being bias on its face and have been reprimanded by both government spokesmen and the media editors themselves, who tend to believe the government before their own reporters.

The more objective and revealing the news reporting become the more aggressive the reactive attacks on the press become also.

Perhaps the matter of hostile and insidious attacks of slander on the press is Spiro Agnew, whose nonsensical nebulous verbiage has bombarded the press and their presented issues into irreparable confusion. These insipid besiegements have intimidated the publishers of newspapers and the owners of electronic media into refusing, to a small degree, to publish opinions contrary to governmental positions.

The beginning of the Nixon era has marked a change in strategy for obtaining governmental control/manipulation of the media. Besides clearing the floor for low level sorties of Agnewian intimidation the administration has waged judicial and economic war against the media businesses and the individual news reporters themselves.

The first concrete judicial actions against the media, shortly after Nixon first took office, were leveled at the news reporters in an effort to force the exposing of confidential sources for information.

In conjunction with the rise in use of the investigative grand juries, carne a rise in judicial action against reporters who had used confidential sources to write stories pertaining to areas where the grand juries needed information. These news personnel were subpoenaed before the grand jury in an unscrupulous effort to obtain the media's sources of information. Most were threatened with contempt charges, refused to testify, and were sentenced to time in jail.

Three of these investigative reporters appealed their cases all the way to the U.S. Supreme Court, which upheld the grand jury charges and ruled that freedom of press wasn't in any way a license to refuse testimony before the juries. The sentences stuck, raising the level of suppression of the news, and the intimidation of the press above the previous low-level attacks by Agnewists.

The most notable result of this ruling was the eventual subpoena and  imprisonment of Daniel Ellsberg for releasing the Pentagon Papers to the Washington Post, who under threat, exposed Ellsberg.

Editors and publishers are now extremely hesitant to allow news stories and investigations that they know will lead to an eventual grand jury indictment. And reporters can no longer offer confidentiality to their sources making them (the sources) unwilling to help in any way for fear of exposure, squashing most attempts at investigative reporting and forcing the media to print only government propaganda or stories of little interest or applicability to the problems facing communities.

With all this behind him in his first term, Nixon has manipulated himself into the position for shutting out the media during his re-election campaign. Holding no press conferences that would have lead to his exposure Rabid Richard sent out tons of propaganda that lead everyone to believe that 'peace is at hand,' and created an information blackout on the extent of present U.S. involvement in South East Asia. He totally controlled the information available and quickly denied any and all allegations to the contrary. By not letting anyone except Ronald Ziegler, White House press secretary, speak about the actions of the executive branch of the government, Nixon sewed up the election without having to present himself or defend any of his actions.

"Newspaper reporters and TV network news commentators are trying to fell you about that war, and about other things the President is doing. They are jailed for trying to inform you," says commissioner Nicholas Johnson of the F.C.C.

And when the only information that can come from the administrative departments is of a detrimental nature Nixon creates a news black out, as in the case of the recent stepped up bombing raids over North Vietnam. All personnel, civilian or military, connected with the defense department were silenced no matter what their position.

At the same time, to insure even more that the electronic media doesn't let anything slip up, Nixon intends to introduce legislation that will hold individual, local TV stations responsible for all network programming they broadcast, along with their own material - at the risk of losing their license.

Realizing that such fascist legislation couldn't get by on its own merits, the stations have been blinded with promised amendments to the Communications Act of 1934. The proposed amendments would allow stations to renew their licenses every five years instead of three. And to go even further Nixon has added to the smokescreen by proposing that the present challenges of license renewal by poor and powerless organizations be made so lengthy and expensive that they couldn't afford to protest.

In essence what the administration's intended legislation means to the stations is that in exchange for shaping the news to the government's requests the stations will be protected economically. (It costs about $10.000 to renew a license.)

"When the question s free speech or profits, they'll pick more prof it every time," said Terry Westen of a law center in Washington.

"When there are only a few sources of national news on television editorial responsibility must be exercised more effectively. . .Station managers and network officials who fail to correct imbalance or consistent bias in the networks - or who acquiesce by silence - can only be considered willing participants, to be held fully accountable. . .at license renewal time."

He went on to say: "Who else but management can or should correct so-called professionals who confuse sensationalism with sense and who dispense elitist gossip in the guise of news analysis."

Not depending entirely on the station management's willingness to censor under the guise of the First Amendment, news programs and documentaries that offend the administration, Nixon has begun to get business associates to try to buy the licenses of those stations that continue to be indignant of judicial and economic intimidation.

One such station, in Jacksonville, Florida, has waged a continuing media war against the injustices of big business operations and the Nixon administration. A CBS affiliate, WJXT, is owned and operated by Newsweek magazine and the Washington Post, both frequent critics of the Nixon Administration.

The war between the media and the Nixon administration continues as the facade of information is shut off more and more, and the media's rights are violated on an ever increasing scale.

David Brinkley, a TV commentator of repute, has perhaps best presented the established media's position on this increase of Nixon's fascist suppression:

"So if people are concerned about danger to their rights and freedoms, they should be aware of where the danger comes from. And it does not come from the press."

"Without the press, there is nobody. Nobody to watch over them. Nobody at all . . . "

Next issue: SUN interview with Detroit Free Press reporter Paul Branzberg, whose case the suppressive landmark decision of the U.S. Supreme Court against the freedom of the press, was based on.