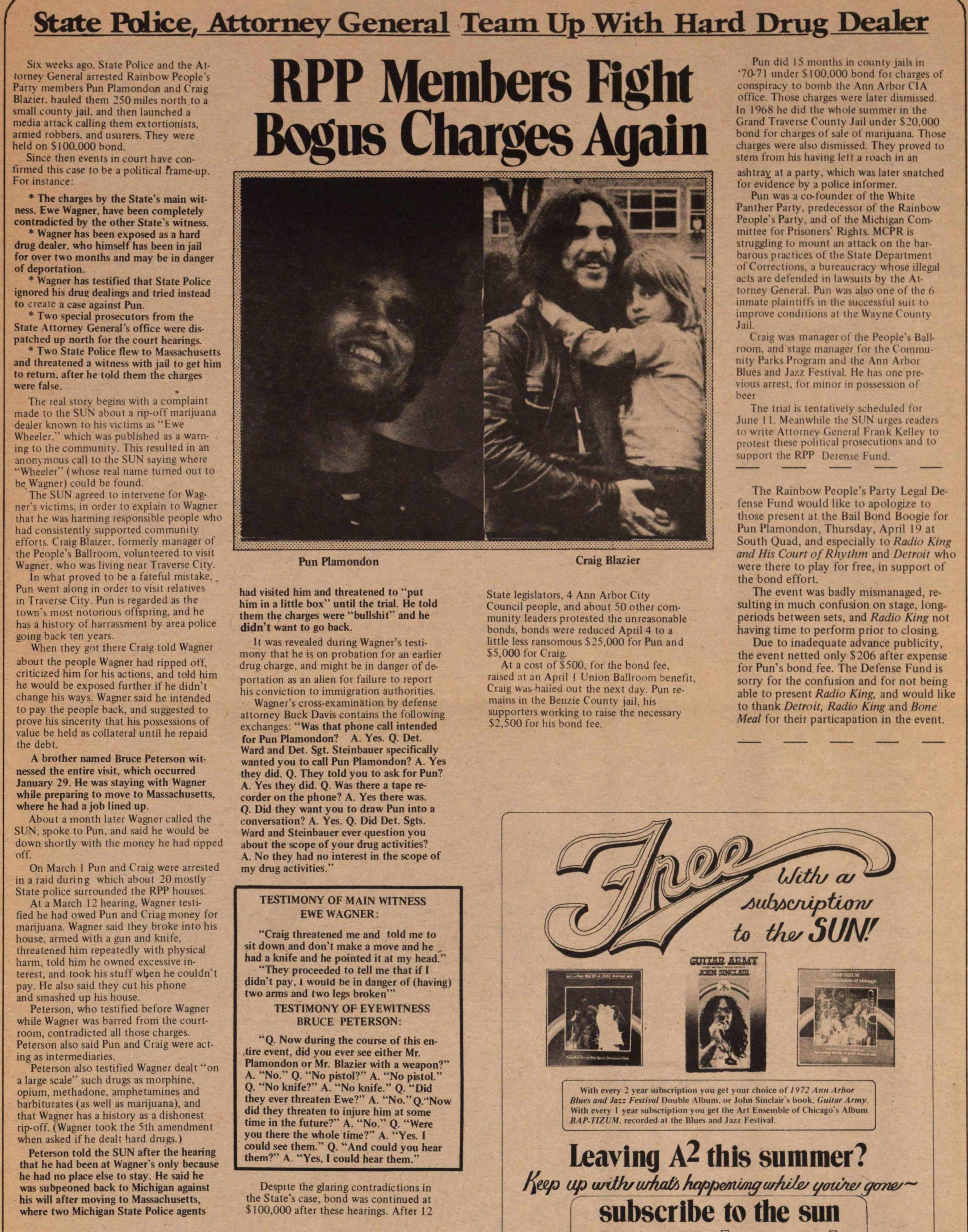 Six weeks ago. State Police and the Attorney General arrested Rainbow People's Party members Pun Plamondon and Craig Blazier, hauled them 250 miles north to a small county jail. and then launched a media attack calling them extortionists, armed robbers, and usurers. They were held on $100,000 bond.

Since then events in court have confirmed this case to be a political frame-up.

*The charges by the State's main witness. Ewe Wagner, have been completely contradicted by the other State's witness.

*Wagner has been exposed as a hard drug dealer, who himself has been in jail for over two months and may be in danger of deportation.

*Wagner has testified that State Police ignored his drug dealings and tried instead to create a case against Pun.

*Two special prosecutors from the State Attorney General's office were dispatched up north for the court hearings.

*Two State Police flew to Massachusetts and threatened a witness with jail to get him to return, after he told them the charges were false.

The real story begins with a complaint made to the SUN about a rip-off marijuana dealer known to his victims as "Ewe Wheeler." which was published as a warning to the community. This resulted in an anonymous call to the SUN saying where "Wheeler" (whose real name turned out to be Wagner) could be found.

The SUN agreed to intervene for Wagner's victims. in order to explain to Wagner that he was harming responsible people who had consistently supported community efforts. Craig Blaizer. formerly manager of the People's Ballroom. volunteered to visit Wagner. who was living near Traverse City.

In what proved to be a fateful mistake, Pun went along in order to visit relatives in Traverse City. Pun is regarded as the town's most notorious offspring, and he has a history of harassment by area police going back ten years.

When they got there Craig told Wagner about the people Wagner had ripped off, criticized him for his actions, and told him he would be exposed further if he didn't change his ways. Wagner said he intended to pay the people back, and suggested to prove his sincerity that his possessions of value be held as collateral until he repaid the debt.

A brother named Bruce Peterson witnessed the entire visit, which occurred January 29. He was staying with Wagner while preparing to move to Massachusetts, where he had a job lined up.

About a month later Wagner called the SUN, spoke to Pun, and said he would be down shortly with the money he had ripped off.

On March 1 Pun and Craig were arrested in a raid during which about 20 mostly State police surrounded the RPP houses.

At a March 12 hearing, Wagner testified he had owed Pun and Craig money for marijuana. Wagner said they broke into his house, armed with a gun and knife, threatened him repeatedly with physical harm, told him he owned excessive interest, and took his stuff when he couldn't pay. He also said they cut his phone and smashed up his house.

Peterson, who testified before Wagner while Wagner was barred from the courtroom, contradicted all those charges. Peterson also said Pun and Craig were acting as intermediaries.

Peterson also testified Wagner dealt "on a Iarge scale" such drugs as morphine. opium, methadone, amphetamines and barbiturates (as well as marijuana), and that Wagner has a history as a dishonest rip-off. (Wagner took the 5th amendment when asked if he dealt hard drugs.)

Peterson told the SUN after the hearing that he had been at Wagner's only because he had no place else to stay. He said he was subpeonaed back to Michigan against his will after moving to Massachusetts, where two Michigan State Police agents had visited him and threatened to "put him in a little box" until the trial. He told them the charges were "bullshit" and he didn't want to go back.

It was revealed during Wagner's testimony that he is on probation for an earlier drug charge, and might be in danger of deportation as an alien for failure to report his conviction to immigration authorities.

Wagner's cross-examination by defense attorney Buck Davis contains the following exchanges: "Was that phone call intended for Pun Plamondon? A. Yes. Q. Det. Ward and Det. Sgt. Steinbauer specifically wanted you to call Pun Plamondon? A. Yes they did. Q. They told you to ask for Pun? A. Yes they did. Q. Was there a tape recorder on the phone? A. Yes there was. Q. Did they want you to draw Pun into a conversation? A. Yes. Q. Did Det. Sgts. Ward and Steinbauer ever question you about the scope of your drug activities? A. No they had no interest in the scope of my drug activities." Despite the glaring contradictions in the State's case, bond was continued at $100,000 after these hearings. After 12 State legislators. 4 Ann Arbor City Council people, and about 50 other community leaders protested the unreasonable bonds, bonds were reduced April 4 to a little less ransomous $25,000 for Pun and $5,000 for Craig.

At a cost of $500, for the bond fee, raised at an April 1 Union Ballroom benefit, Craig was bailed out the next day. Pun remains in the Benzie County jail, his supporters working to raise the necessary $2,500 for his bond tee.

Pun did 15 months in county jails in '70-'71 under $100,000 bond for charges of conspiracy to bomb the Ann Arbor CIA office. Those charges were later dismissed. In 1968 he did the whole summer in the Grand Traverse County Jail under $20.000 bond for charges of sale of marijuana. Those charges were also dismissed. They proved to stem from his having left a roach in an ashtray at a party, which was later snatched for evidence by a police informer.

Pun was a co-founder of the White Panther Party, predecessor of the Rainbow People's Party, and of the Michigan Committee for Prisoners' Rights. MCPR is struggling to mount an attack on the barbarous practices of the State Department of Correction, a bureaucracy whose illegal acts are defended in lawsuits by the Attorney General. Pun was also one of the 6 inmate plaintiffs in the successful suit to improve conditions at the Wayne County Jail.

Craig was manager of the People's Ballroom, and stage manager for the Community Parks Program and the Ann Arbor Blues and Jazz Festival. He has one previous arrest, for minor in possession of beer.

The trial is tentatively scheduled for June 11. Meanwhile the SUN urges readers to write Attorney General Frank Kelley to protest these politica! prosecutions and to support the RPP Detense Fund.

The Rainbow People's Party Legal Defense Fund would like to apologize to those present at the Bail Bond Boogie for Pun Plamondon, Thursday, April 19 at South Quad, and especially to Radio King and His Court of Rhythm and Detroit who were there to play for free, in support of the bond effort.

The event was badly mismanaged, resulting in much confusion on stage, long periods between sets, and Radio King not having time to perform prior to closing.

Due to inadequate advance publicity, the event netted only $206 after expense for Pun's bond fee. The Defense Fund is sorry for the confusion and for not being able to present Radio King, and would like to thank Detroit, Radio King and Bone Meal for their participation in the event.

"Craig threatened me and told me to sit down and don't make a move and he had a knife and he pointed it at my head."

"They proceeded to tell me that if I didn't pay, I would be in danger of (having) two arms and two legs broken'"