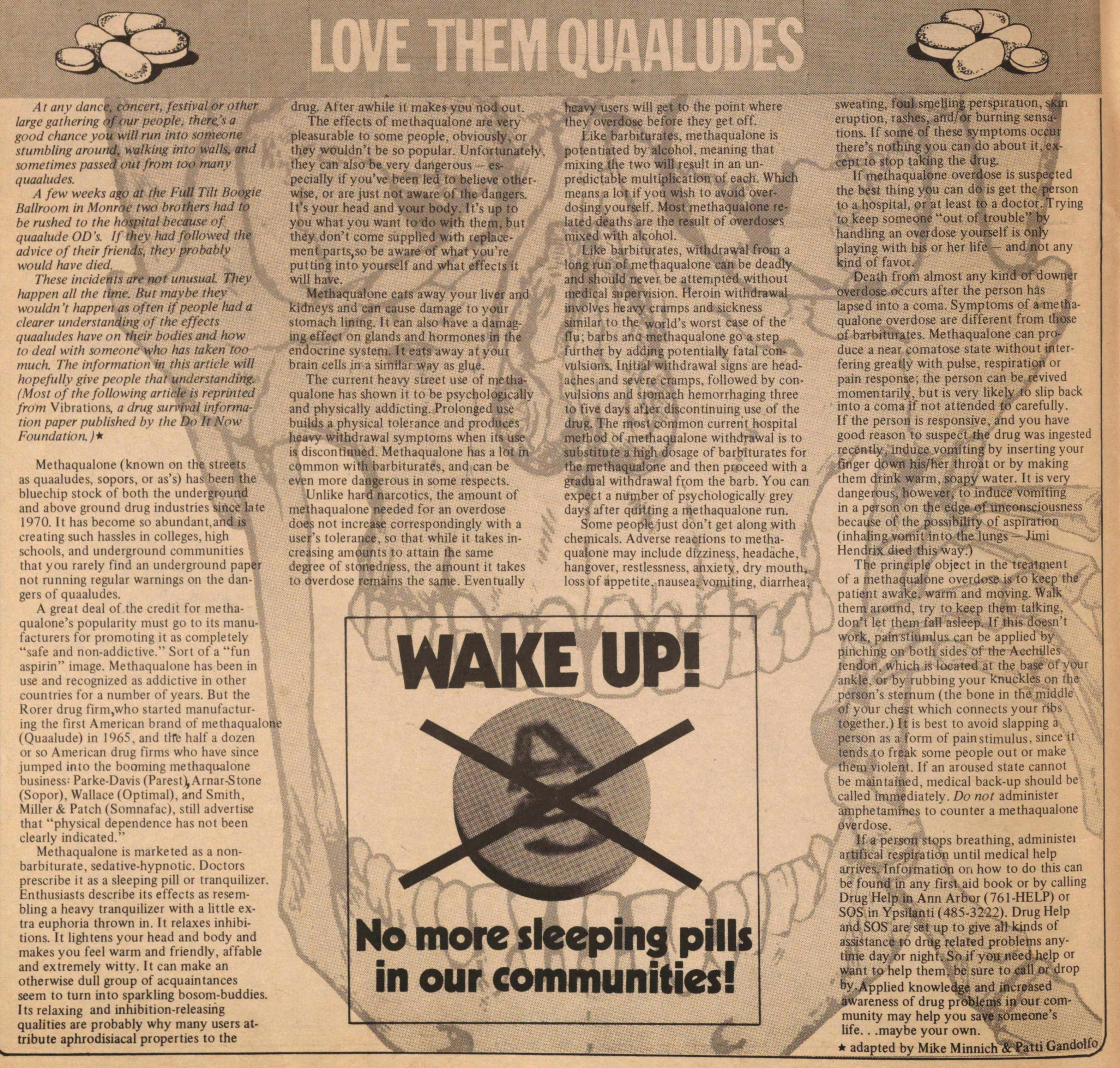 At any dance, concert, festival or other large gathering of our people, there’s a good chance you will run into someone stumbling around, walking into walls, and sometimes passed out from too many Quaaludes.

A few weeks ago at the Full Tilt Boogie Ballroom in Monroe two brothers had to be rushed to the hospital because of Quaalude OD’s. If they had followed the advice of their friends, they probably would have died.

These incidents are not unusual. They happen all the time. But maybe they wouldn’t happen as often if people had a clearer understanding of the effects Quaaludes have on their bodies and how to deal with someone who has taken too much. The information in this article will hopefully give people that understanding. (Most of the following article is reprinted from Vibrations, a drug survival information paper published by the Do It Now Foundation)*

Methaqualone (known on the streets as Quaaludes, sopors, or as’s) has been the blue-chip stock of both the underground and above ground drug industries since late 1970. It has become so abundant, and is creating such hassles in colleges, high schools, and underground communities that you rarely find an underground paper not running regular warnings on the dangers of Quaaludes.

A great deal of the credit for methaqualone’s popularity must go to its manufacturers for promoting it as completely “safe and non-addictive.” Sort of a “fun aspirin” image. Methaqualone has been in use and recognized as addictive in other countries for a number of years. But the Rorer drug firm, who started manufacturing the first American brand of methaqualone (Quaalude) in 1965, and the half a dozen or so American drug firms who have since jumped into the booming methaqualone business: Parke-Davis (Parest), Arnar-Stone (Sopor), Wallace (Optimal), and Smith, Miller & Patch (Somnafac), still advertise that “physical dependence has not been clearly indicated.”

Methaqualone is marketed as a nonbarbiturate, sedative-hypnotic. Doctors prescribe it as a sleeping pill or tranquilizer. Enthusiasts describe its effects as resembling a heavy tranquilizer with a little extra euphoria thrown in. It relaxes inhibitions. It lightens your head and body and makes you feel warm and friendly, affable and extremely witty. It can make an otherwise dull group of acquaintances seem to turn into sparkling bosom-buddies. Its relaxing and inhibition-releasing qualities are probably why many users attribute aphrodisiacal properties to the drug. After a while it makes you nod out.

The effects of methaqualone are very pleasurable to some people, obviously, or they wouldn’t be so popular. Unfortunately, they can also be very dangerous especially if you’ve been led to believe otherwise, or are just not aware of the dangers. It’s your head and your body. It’s up to you what you want to do with them, but they don’t come supplied with replacement parts, so be aware of what you’re putting into yourself and what effects it will have.

Methaqualone eats away your liver and kidneys and can cause damage to your stomach lining. It can also have a damaging effect on glands and hormones in the endocrine system. It eats away at your brain cells in a similar way as glue.

The current heavy street use of methaqualone has shown it to be psychologically and physically addicting. Prolonged use builds a physical tolerance and produces heavy withdrawal symptoms when its use is discontinued. Methaqualone has a lot in common with barbiturates, and can be even more dangerous in some respects.

Unlike hard narcotics, the amount of methaqualone needed for an overdose does not increase correspondingly with a user’s tolerance, so that while it takes increasing amounts to attain the same degree of stoned-ness, the amount it takes to overdose remains the same. Eventually heavy users will get to the point where they overdose before they get off.

Like barbiturates, methaqualone is potentiated by alcohol, meaning that mixing the two will result in an unpredictable multiplication of each. Which means a lot if you wish to avoid overdosing yourself. Most methaqualone related deaths are the result of overdoses mixed with alcohol.

Some people just don’t get along with chemicals. Adverse reactions to methaqualone may include dizziness, headache, hangover, restlessness, anxiety, dry mouth, loss of appetite, nausea, vomiting, diarrhea, sweating, foul smelling perspiration, skin eruption, rashes, and or burning sensations. If some of these symptoms occur there’s nothing you can do about it, except to stop taking the drug.

If methaqualone overdose is suspected the best thing you can do is get the person to a hospital, or at least a doctor. Trying to keep someone “out of trouble” by handling an overdose yourself is only playing with his or her life – and not any kind of favor.

Death from almost any kind of downer overdose occurs after the person has lapsed into a coma. Symptoms of a methaqualone overdose are different from those of barbiturates. Methaqualone can produce a near comatose state without interfering greatly with pulse, respiration or pain response; the person can be revived momentarily, but is very likely to slip back into a coma if not attended to carefully. If the person is responsive, and you have good reason to suspect the drug was ingested recently, induce vomiting by inserting your finger down his/her throat or by making them drink warm, soapy water. It is very dangerous, however, to induce vomiting in a person on the edge of unconsciousness because of the possibility of aspiration (inhaling vomit into the lungs – Jimi Hendrix died this way.)

The principle object in the treatment of a methaqualone overdose is to keep the patient awake, warm and moving. Walk them around, try to keep them talking, don’t let them fall asleep. If this doesn’t work, pain stimulus can be applied by pinching on both sides of the Achilles tendon, which is located at the base of your ankle, or by rubbing your knuckles on the person’s sternum (the bone in the middle of your chest which connects your ribs together.) It is best to avoid slapping a person as form of pain stimulus, since it tends to freak some people out or make them violent. If an aroused state cannot be maintained, medical back-up should be called immediately. Do not administer amphetamines to counter a methaqualone overdose.

If a person stops breathing, administer artificial respiration until medical help arrives. Information on how to do this can be found in any first aid book or by calling Drug Help in Ann Arbor (761-HELP) or SOS in Ypsilanti (485-3222). Drug Help and SOS are set up to give all kinds of assistance to drug related problems anytime day or night. So, if you need help or want to help them; be sure to call or drop by. Applied knowledge and increased awareness of drug problems in our community may help you save someone’s life. . .maybe your own.

No more sleeping pills in our communities!