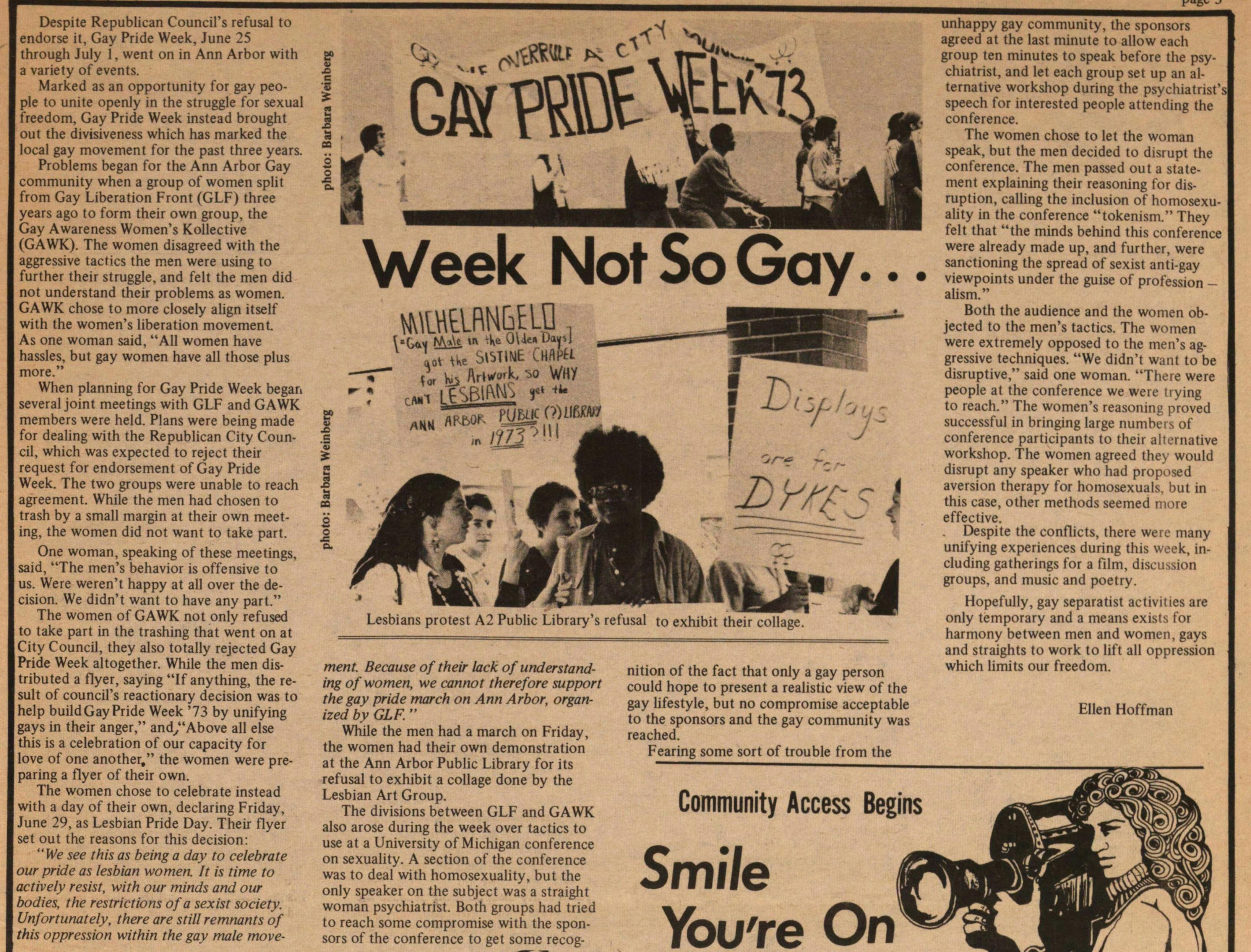 Despite Republican Council's refusal to endorse it, Gay Pride Week, June 25 through July 1, went on in Ann Arbor with a variety of events.

Marked as an opportunity for gay people to unite openly in the struggle for sexual freedom, Gay Pride Week instead brought out the divisiveness which has marked the local gay movement for the past three years.

Problems began for the Ann Arbor Gay community when a group of women split from Gay Liberation Front (GLF) three years ago to form their own group, the Gay Awareness Women's Kollective (GAWK). The women disagreed with the aggressive tactics the men were using to further their struggle, and felt the men did not understand their problems as women. GAWK chose to more closely align itself with the women's liberation movement. As one woman said, "All women have hassles, but gay women have all those plus more."

When planning for Gay Pride Week began several joint meetings with GLF and GAWK members were held. Plans were being made for dealing with the Republican City Council, which was expected to reject their request for endorsement of Gay Pride Week. The two groups were unable to reach agreement. While the men had chosen to trash by a small margin at their own meeting, the women did not want to take part.

One woman, speaking of these meetings, said, "The men's behavior is offensive to us. Were weren't happy at all over the decision. We didn't want to have any part."

The women of GAWK not only refused to take part in the trashing that went on at City Council, they also totally rejected Gay Pride Week altogether. While the men distributed a flyer, saying "If anything, the result of council's reactionary decision was to help build Gay Pride Week '73 by unifying gays in their anger," and, "Above all else this is a celebration of our capacity for love of one another," the women were preparing a flyer of their own.

The women chose to celebrate instead with a day of their own, declaring Friday, June 29, as Lesbian Pride Day. Their flyer set out the reasons for this decision:

"We see this as being a day to celebrate our pride as lesbian women. It is time to actively resist, with our minds and our bodies, the restrictions of a sexist society. Unfortunately, there are still remnants of this oppression within the gay male movement. Because of their lack of understanding of women, we cannot therefore support the gay pride march on Ann Arbor, organized by GLF. "

While the men had a march on Friday, the women had their own demonstration at the Ann Arbor Public Library for its refusal to exhibit a collage done by the Lesbian Art Group.

The divisions between GLF and GAWK also arose during the week over tactics to use at a University of Michigan conference on sexuality. A section of the conference was to deal with homosexuality, but the only speaker on the subject was a straight woman psychiatrist. Both groups had tried to reach some compromise with the sponsors of the conference to get some recognition of the fact that only a gay person could hope to present a realistic view of the gay lifestyle, but no compromise acceptable to the sponsors and the gay community was reached.

Fearing some sort of trouble from the unhappy gay community, the sponsors agreed at the last minute to allow each group ten minutes to speak before the psychiatrist, and let each group set up an alternative workshop during the psychiatrist's speech for interested people attending the conference.

The women chose to let the woman speak, but the men decided to disrupt the conference. The men passed out a statement explaining their reasoning for disruption, calling the inclusion of homosexuality in the conference "tokenism." They felt that "the minds behind this conference were already made up, and further, were sanctioning the spread of sexist anti-gay viewpoints under the guise of professionalism."

Both the audience and the women objected to the men's tactics. The women were extremely opposed to the men's aggressive techniques. "We didn't want to be disruptive," said one woman. "There were people at the conference we were trying to reach." The women's reasoning proved successful in bringing large numbers of conference participants to their alternative workshop. The women agreed they would disrupt any speaker who had proposed aversion therapy for homosexuals. but in this case, other methods seemed more effective.

Despite the conflicts, there were many unifying experiences during this week, including gatherings for a film, discussion groups, and music and poetry.

Hopefully, gay separatist activities are only temporary and a means exists for harmony between men and women, gays and straights to work to lift all oppression which limits our freedom.