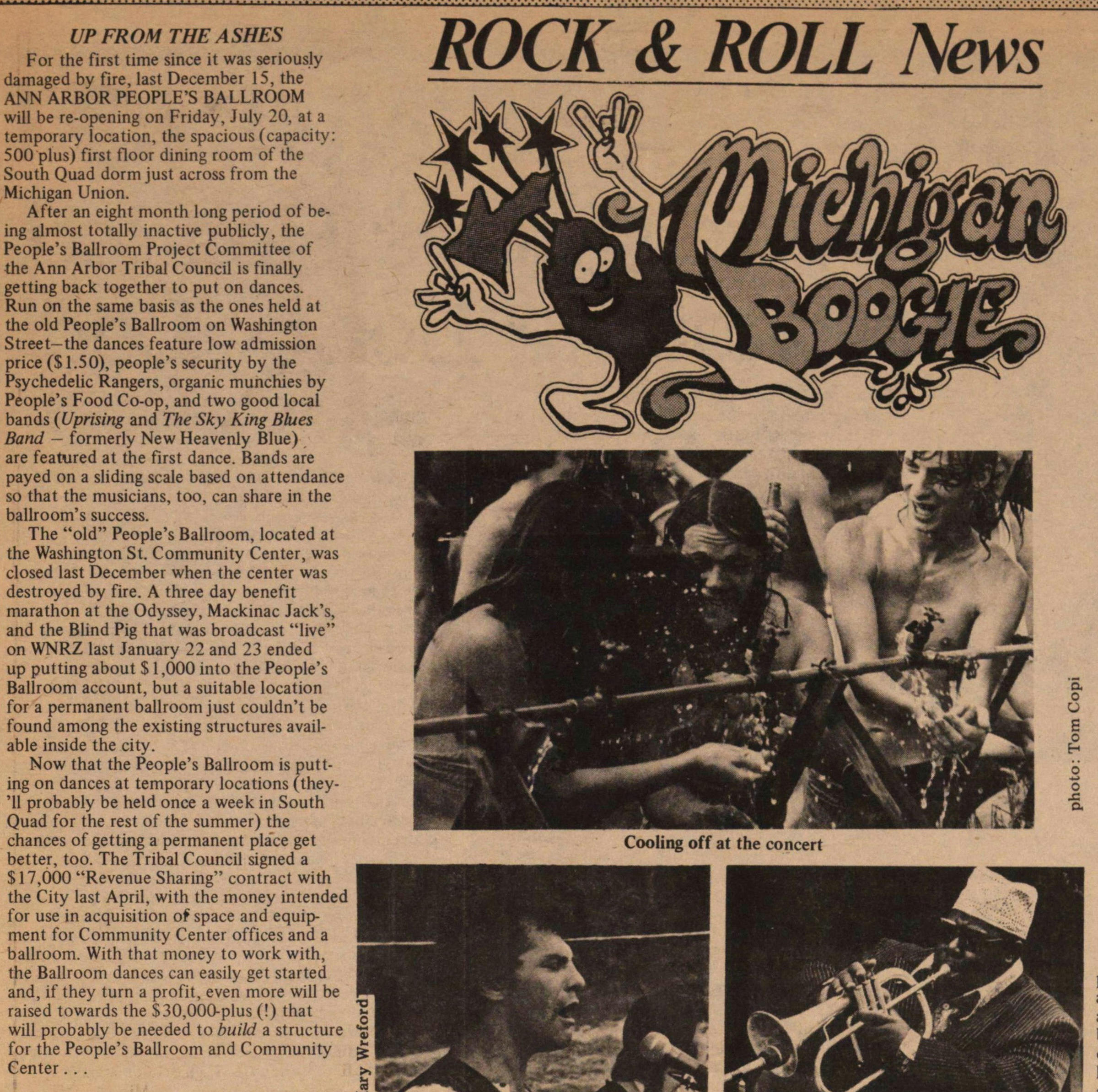 UP FROM THE ASHES

For the first time since it was seriously damaged by fire, last December 15, the ANN ARBOR PEOPLE'S BALLROOM will be re-opening on Friday, July 20, at a temporary location, the spacious (capacity: 500 plus) first floor dining room of the South Quad dorm just across from the Michigan Union.

After an eight month long period of being almost totally inactive publicly, the People's Ballroom Project Committee of the Ann Arbor Tribal Council is finally getting back together to put on dances. Run on the same basis as the ones held at the old People's Ballroom on Washington Street- the dances feature low admission price ($1.50), people's security by the Psychedelic Rangers, organic munchies by People's Food Co-op, and two good local bands (Uprising and The Sky King Blues Band - formerly New Heavenly Blue) are featured at the first dance. Bands are payed on a sliding scale based on attendance so that the musicians, too, can share in the ballroom's success.

The "old" People's Ballroom, located at the Washington St. Community Center, was closed last December when the center was destroyed by fire. A three day benefit marathon at the Odyssey, Mackinac Jack's, and the Blind Pig that was broadcast "live" on WNRZ last January 22 and 23 ended up putting about $ 1,000 into the People's Ballroom account, but a suitable location for a permanent ballroom just couldn't be found among the existing structures available inside the city.

Now that the People's Ballroom is putting on dances at temporary locations (they'll probably be held once a week in South Quad for the rest of the summer) the chances of getting a permanent place get better, too. The Tribal Council signed a $17,000 "Revenue Sharing" contract with the City last April, with the money intended for use in acquisition of space and equipment for Community Center offices and a ballroom. With that money to work with, the Ballroom dances can easily get started and, if they turn a profit, even more will be raised towards the $30,000-plus (!) that will probably be needed to build a structure for the People's Ballroom and Community Center . . .

Cooling off at the concert