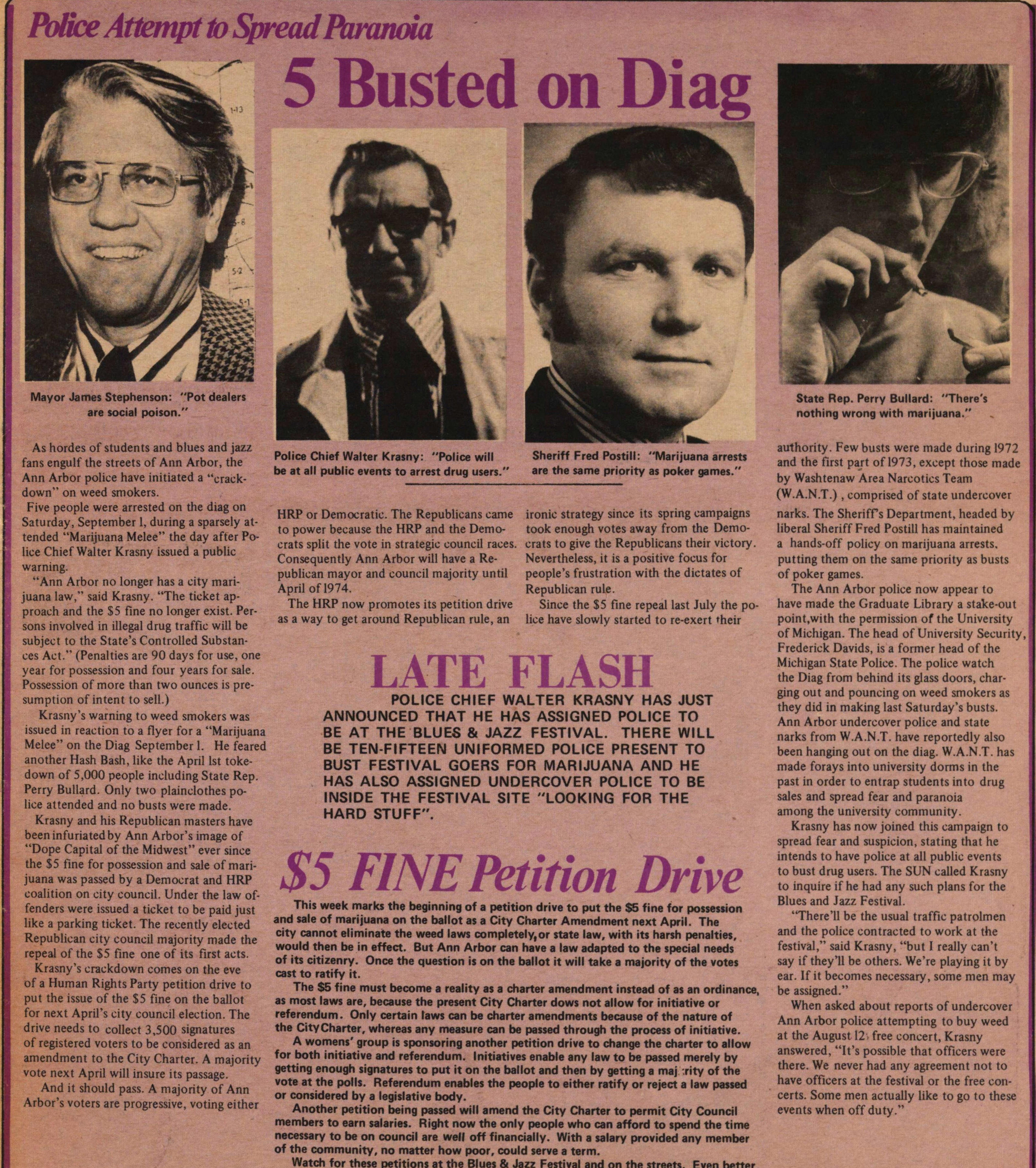 As hordes of students and blues and jazz fans engulf the streets of Ann Arbor, the Ann Arbor pólice have initiated a "crackdown" on weed smokers. Five people were arrested on the diag on Saturday, September 1, during a sparsely attended "Marijuana Melee" the day after Police Chief Walter Krasny issued a public warning. "Ann Arbor no longer has a city marijuana law," said Krasny. "The ticket approach and the S5 fine no longer exist. Persons involved in illegal drug trafile will be subject to the State's Controlled Substances Act." (Penalties are 90 days for use, one year for possession and four years for sale. Possession of more than two ounces is presumption of intent to sell.) Krasny 's warning to weed smokers was issued in reaction to a fiyer for a "Marijuana Melee" on the Diag September 1. He feared another Hash Bash, like the April lst tokedown of 5,000 people including State Rep. Perry Bullard. Only two plainclothes police attended and no busts were made. Krasny and his Republican masters have beeninfuriatedby Ann Arbor's image of "Dope Capital of the Midwest" ever since the $5 fine for possession and sale of marijuana was passed by a Democrat and HRP coalition on city council. Under the law offenders were issued a ticket to be paid just like a parking ticket. The recently elected Republican city council majority made the repeal of the $5 fine one of its first acts. Krasny's crackdown comes on the eve of a Human Rights Party petition drive to put the issue of the $5 fine on the ballot for next April's city council election. The drive needs to collect 3,500 signatures of registered voters to be considered as an amendment to the City Charter. A majority vote next April will insure its passage. And it should pass. A majority of Ann Arbor's voters are progressive, voting either HRP or Democratie. The Republicans came to power because the HRP and the Democrats split the vote in strategie eouneil races. Consequently Ann Arbor will have a Republican mayor and eouneil majority until April of 1974. The HRP now promotes its petition drive as a way to get around Republiean rule, an ironie strategy since its spring campaigns took enough votes away from the Democrats to give the Republicans their victory. Nevertheless, it is a positive focus for people's frustration with the dictates of Republican rule. Since the $5 fine repeal last July the police have slowly starled to re-exert their authority. Few busts were made during 1972 and the first part of 1973, except those made by Washtenaw Area Narcotics Team (W.A.N.T.) , comprised of state undercover narks. The Sheriffs Department, headed by liberal Sheriff Fred Postill has maintained a hands-off policy on marijuana arrests. putting them on the same priority as busts of poker games. The Ann Arbor pólice now appear to have made the Gradúate Library a stake-out point.with the permission of the University of Michigan. The head of University Security, Frederick Davids, is a former head of the Michigan State Pólice. The pólice watch the Diag from behind its glass doors, charging out and pouncing on weed smokers as they did in making last Saturday's busts. Ann Arbor undercover pólice and state narks from W.A.N.T. have reportedly also been hanging out on the diag. W.A.N.T. has made forays into university dorms in the past in order to entrap students into drug sales and spread fear and paranoia among the university community. Krasny has now joined this campaign to spread fear and suspicion, stating that he intends to have pólice at all public events to bust drug users. The SUN called Krasny to inquire if he had any such plans for the Blues and Jazz Festival. "There'll be the usual traffïc patrolmen and the pólice contracted to work at the festival," said Krasny, "but I really can't say if they'll be others. We're playing it by ear. If it becomes necessary, some men may be assigned." When asked about reports of undercover Ann Arbor pólice attempting to buy weed at the August 12 free concert, Krasny answered, "It's possible that officers were there. We never had any agreement not to have officers at the festival or the free concerts. Some men actually like to go to these events when off duty."