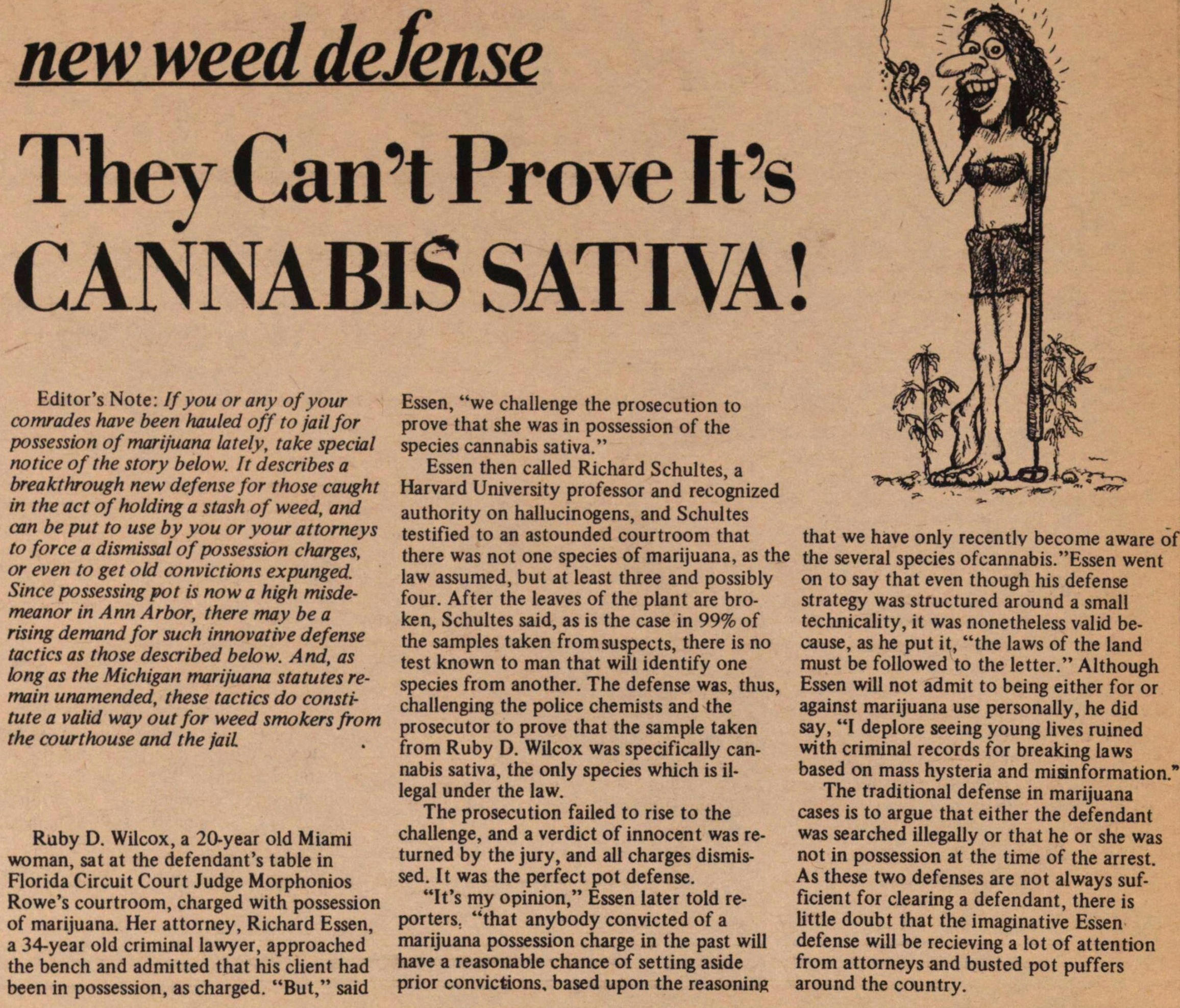 Editor's Note: Ifyou orany ofyour comrades have been hauled off to jailfor possession of marijuana lately, take special notice of the story below. It describes a breakthrough new defense for those caught in the act of holding a stash of weed, and can be put to use by you or your attorneys to forcé a dismissal of possession charges, or even to get old convictions expunged. Since possessing pot is nowa high misdemeanor in Ann Arbor, there may be a rising demandfor such innovative defense tactics as those described below. And, as long as the Michigan marijuana statutes remain unamended, these tactics do consth tute a valid way out for weed smokersfrom the courthouse and the jaiL Ruby D. Wilcox, a 20-year old Miami woman, sat at the defendant's table in Florida Circuit Court Judge Morphonios Rowe's courtroom, charged with possession of marijuana. Her attorney, Richard Essen, a 34-year old criminal lawyer, approached the bench and admitted that his cliënt had been in possession, as charged. "But," said Essen, "we challenge the prosecution to prove that she was in possession of the species cannabis sativa." Essen then called Richard Schultes, a Harvard University professor and recognized authority on hallucinogens, and Schultes testified to an astounded courtroom that there was not one species of marijuana, as the law assumed, but at least three and possibly four. After the leaves of the plant are broken, Schultes said, as is the case in 99% of the samples taken fromsuspects, there is no test known to man that will identify one species from another. The defense was, thus, challenging the pólice chemists and the prosecutor to prove that the sample taken from Ruby D. Wilcox was specifically cannabis sativa, the only species which is illegal under the law. The prosecution failed to rise to the i challenge, and a verdict of innocent was returned by the jury, and all charges i sed. It was the perfect pot defense. i "It's my opinión," Essen later told 1 porters. "that anybody convicted of a I marijuana possession charge in the past will i have a reasonable chance of setting aside I prior convictions. based upon the reasoning that we have only recentlv become aware of the several species ofcannabis."Essen went on to say that even though nis defense strategy was structured around a small technicality, it was nonetheless valid because, as he put it, "the laws of the land must be followed to the letter." Although Essen will not admit to being either for or against marijuana use personally, he did say, "I deplore seeing young lives ruined with criminal records for breaking laws based on mass hysteria and mianformation." The traditional defense in marijuana cases is to argue that either the defendant was searched illegally or that he or she was not in possession at the time of the arrest. As these two defenses are not always sufficient for clearing a defendant, there is little doubt that the imaginative Essen defense will be recieving a lot of attention from attorneys and busted pot puffers around the country.