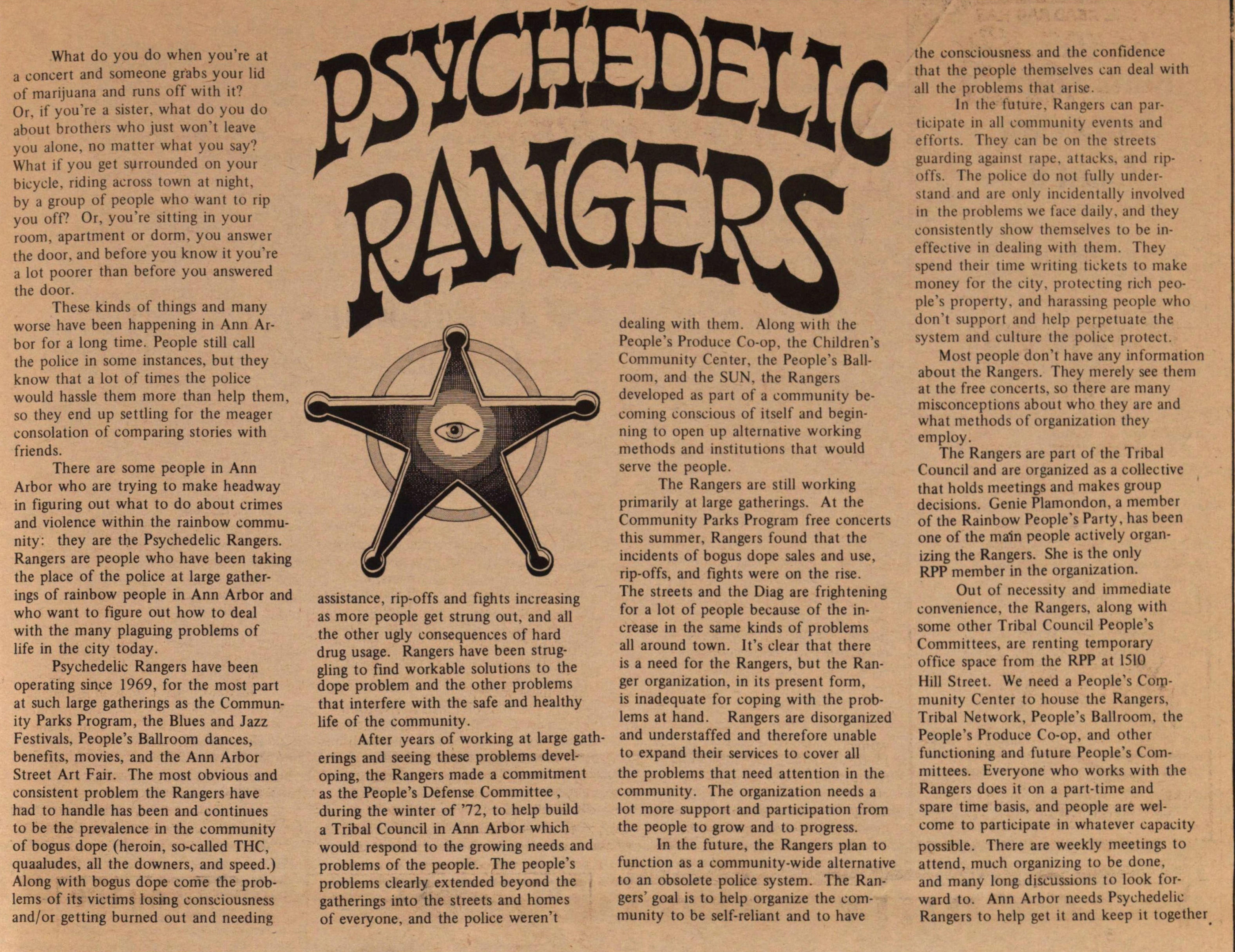 What do you do when you're at a concert and someone grabs your lid of marijuana and runs off with it? Or, if you're a sister, what do you do about brothers who just won't leave you alone, no matter what you say? What if you get surrounded on your bicycle, riding across town at night. by a group of people who want to rip you off? Or, you're sitting in your room, apartment or dorm, you answer the door. and before you know it you're a lot poorer than before you answered the door.

These kinds of things and many worse have been happening in Ann Arbor for a long time. People still call the police in some instances. but they know that a lot of times the police would hassle them more than help them, so they end up settling for the meager consolation of comparing stories with friends.

There are some people in Ann Arbor who are trying to make headway in figuring out what to do about crimes and violence within the rainbow community: they are the Psychedelic Rangers. Rangers are people who have been taking the place of the police at large gatherings of rainbow people in Ann Arbor and who want to figure out how to deal with the many plaguing problems of life in the city today.

Psychedelic Rangers have been operating since 1969, for the most part at such large gatherings as the Community Parks Program, the Blues and Jazz Festivals, People's Ballroom dances, benefits, movies, and the Ann Arbor Street Art Fair. The most obvious and consistent problem the Rangers have had to handle has been and continues to be the prevalence in the community of bogus dope (heroin, so-called THC, quaaludes, all the downers, and speed.) Along with bogus dope come the problems of its victims losing consciousness and/or getting burned out and needing assistance, rip-offs and fights increasing as more people get strung out, and all the other ugly consequences of hard drug usage. Rangers have been struggling to find workable solutions to the dope problem and the other problems that interfere with the safe and healthy life of the community.

After years of working at large gatherings and seeing these problems developing, the Rangers made a commitment as the People's Defense Committee, during the winter of '72, to help build a Tribal Council in Ann Arbor which would respond to the growing needs and problems of the people. The people's problems clearly extended beyond the gatherings into the streets and homes of everyone, and the police weren't dealing with them. Along with the People's Produce Co-op, the Children's Community Center, the People's Ballroom, and the SUN, the Rangers developed as part of a community becoming conscious of itself and beginning to open up alternative working methods and institutions that would serve the people.

The Rangers are still working primarily at large gatherings. At the Community Parks Program free concerts this summer, Rangers found that the incidents of bogus dope sales and use, rip-offs, and fights were on the rise. The streets and the Diag are frightening for a lot of people because of the increase in the same kinds of problems all around town. It's clear that there is a need for the Rangers, but the Ranger organization, in its present form, is inadequate for coping with the problems at hand. Rangers are disorganized and understaffed and therefore unable to expand their services to cover all the problems that need attention in the community. The organization needs a lot more support and participation from the people to grow and to progress.

In the future, the Rangers plan to function as a community-wide alternative to an obsolete police system. The Rangers' goal is to help organize the community to be self-reliant and to have the consciousness and the confidence that the people themselves can deal with all the problems that arise.

In the future. Rangers can participate in all community events and efforts. They can he on the streets guarding against rape, attacks. and ripoffs. The police do not fully understand and are only incidentally involved in the problems we face daily, and they consistently show themselves to be ineffective in dealing with them. They spend their time writing tickets to make money for the city, protecting rich people's property. and harassing people who don't support and help perpetuate the system and culture the police protect.

Most people don't have any information about the Rangers. They merely see them at the free concerts, so there are many misconceptions about who they are and what methods of organization they employ.

The Rangers are part of the Tribal Council and are organized as a collective that holds meetings and makes group decisions. Genie Plamondon, a member of the Rainbow People's Party, has been one of the main people actively organizing the Rangers. She is the only RPP member in the organization.

Out of necessity and immediate convenience, the Rangers, along with some other Tribal Council People's Committees, are renting temporary office space from the RPP at 1510 Hill Street. We need a People's Community Center to house the Rangers, Tribal Network, People's Ballroom, the People's Produce Co-op, and other functioning and future People's Committees. Everyone who works with the Rangers does it on a part-time and spare time basis, and people are welcome to participate in whatever capacity possible. There are weekly meetings to attend, much organizing to be done, and many long discussions to look forward to. Ann Arbor needs Psychedelic Rangers to help get it and keep it together.