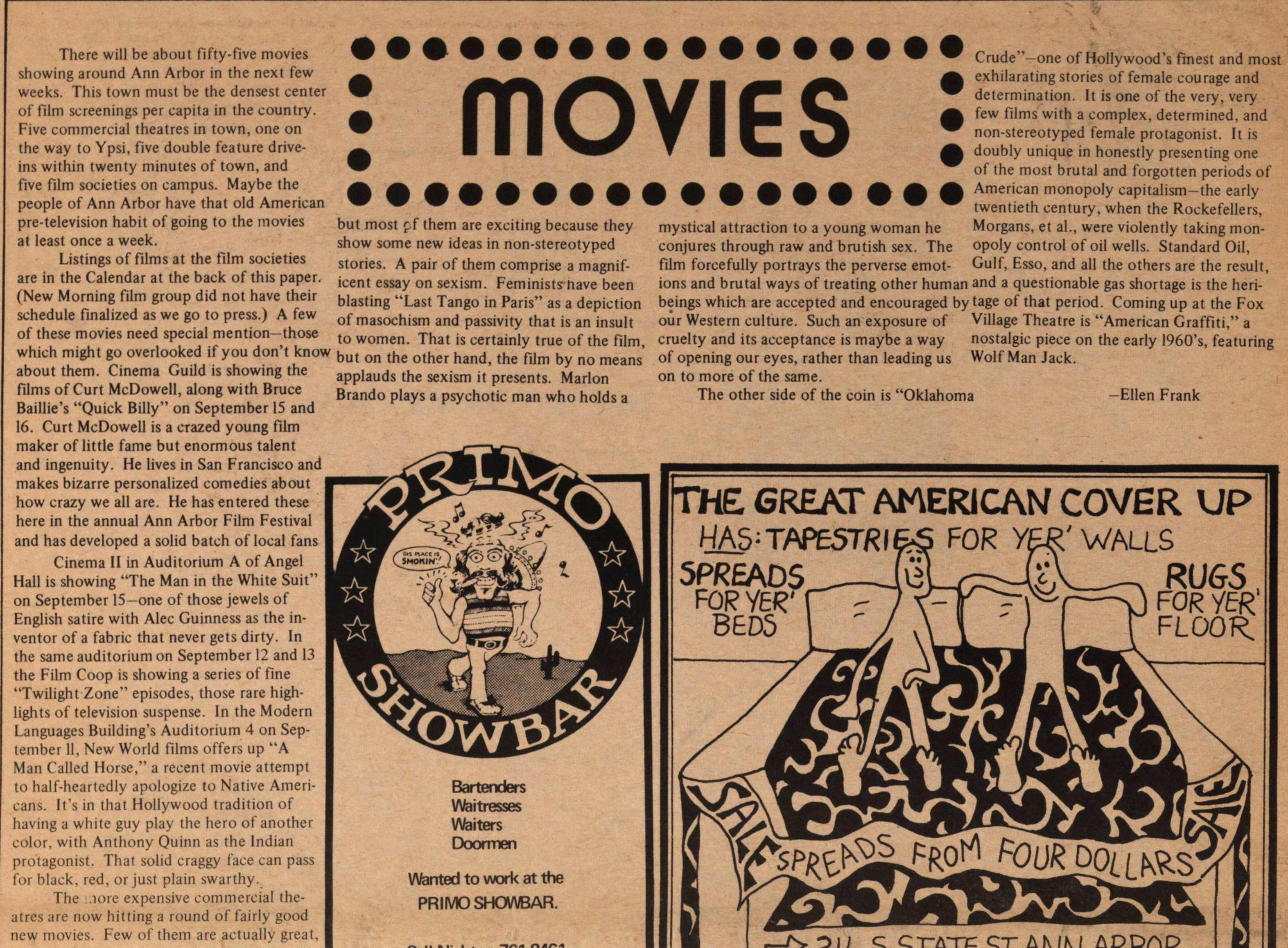 There will be about fifty-five movies showing around Ann Arbor in the next few weeks. This town must be the densest center of film screenings per capita in the country. Five commercial theatres in town, one on the way to Ypsi, five doublé feature driveins within twenty minutes of town, and five film societies on campus. Maybe the people of Ann Arbor have that old American pre-television habit of going to the movies at least once a week. Listings of films at the film societies are in the Calendar at the back of this paper. (New Morning film group did not have their schedule finalized as we go to press.) A few of these movies need special mention- those which might go overlooked if you don't know about them. Cinema Guild is showing the films of Curt McDowell, along with Bruce Baillie's "Quick Billy" on September 15 and 16. Curt McDowell is a crazed young film maker of little fame but enormous talent and ingenuity. He lives in San Francisco and makes bizarre personalized comedies about I how crazy we all are. He has entered these here in the annual Ann Arbor Film Festival I and has developed a solid batch of local fans I Cinema II in Auditorium A of Angel Hall is showing "The Man in the White Suit" I on September 15-one of those jewels of English satire with Alee Guinness as the inventor of a fabric that never gets dirty. In the same auditorium on September 12 and 13 the Film Coop is showing a series of fine "Twilight Zone" episodes, those rare highlights of televisión suspense. In the Modern Languages Building's Auditorium 4 on September 11, New World films offers up "A Man Called Horse," a recent movie attempt to half-heartedly apologize to Native Americans. It's in that Hollywood tradition of having a white guy play the hero of another color, with Anthony Quinn as the lndian protagonist. That solid craggy face can pass for black, red, or just plain swarthy. The ïore expensive commercial theatres are now liitting a round of fairly good new movies. Few of them are actually great, tut most f.f them are exciting because they show some new ideas in non-stereotyped stories. A pair of them comprise a magnificent essay on sexism. Feministsnave been blasting "Last Tango in Paris" as a depiction 3f masochism and passivity that is an insult to women. That is certainly true of the film, 3ut on the other hand, the film by no means ipplauds the sexism it presents. Marión Drando plays a psychotic man who holds a mystical attraction to a young woman he conjures through raw and brutish sex. The film forcefully portrays the perverse emotions and brutal ways of treating other human beings which are accepted and encouraged by our Western culture. Such an exposure of cruelty and its acceptance is maybe a way of opening our eyes, rather than leading us on to more of the same. The other side of the coin is "Oklahonu Crude"-one of Hollywood 's fmest and most exhilarating stories of female courage and determination. It is one of the very, very few films with a complex, determined, and non-stereotyped female protagonist. It is doubly unique in honestly presenting one of the most brutal and forgotten periods of American monopoly capitalism-the early twentieth century, when the Rockefellers, Morgans, et al., were violently taking monopoly control of oil wells. Standard Oil, Gulf, Esso, and all the others are the result, and a questionable gas shortage is the heritage of that period. Coming up at the Fox Village Theatre is "American Graffiti," a nostalgie piece on the early 1960's, featuring Wolf Man Jack.