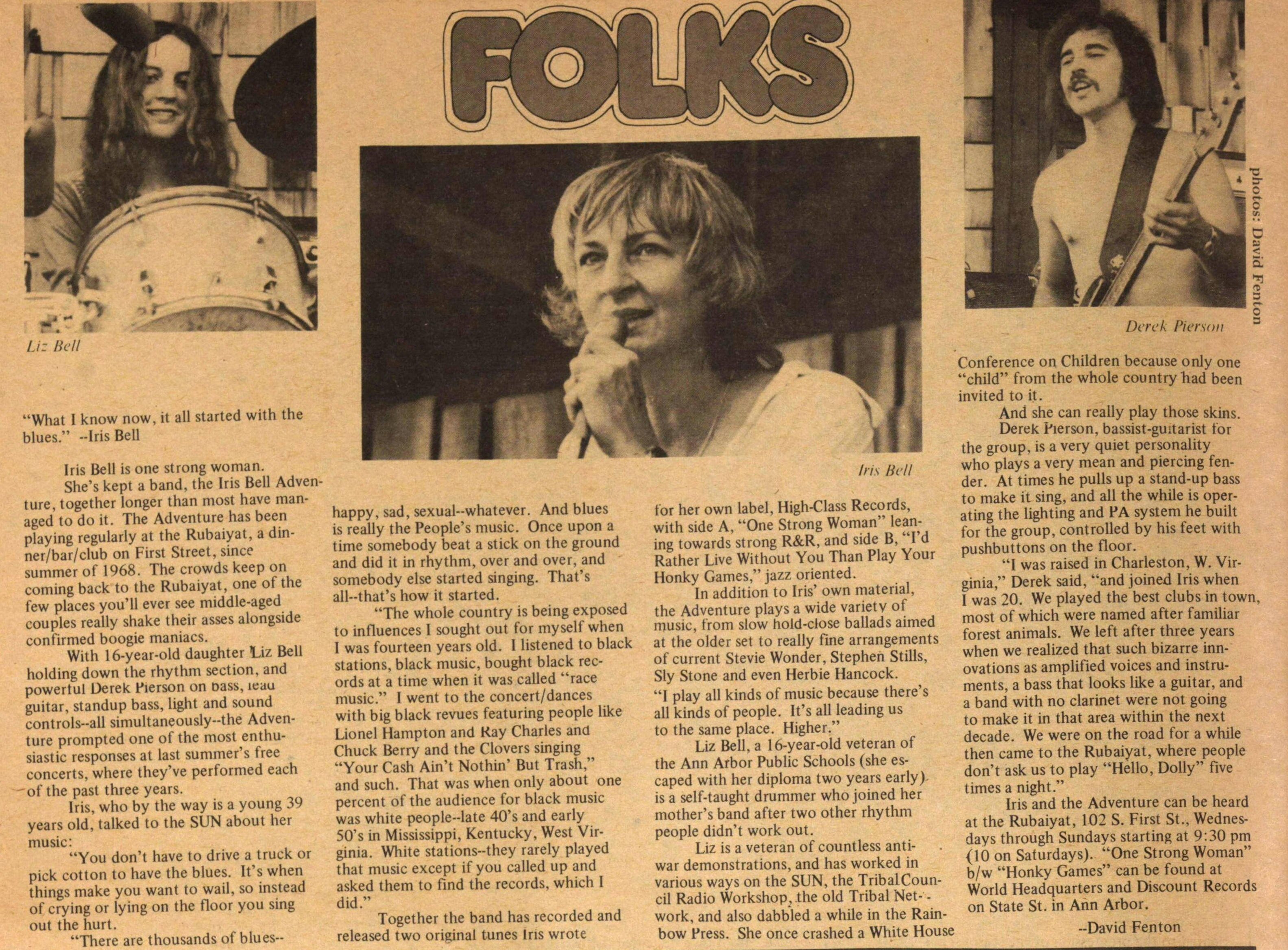 "What I know now, it all started with the blues."
--Iris Bell

Iris Bell is one strong woman.

She's kept a band, the Iris Bell Adventure, together longer than most have managed to do it. The Adventure has been playing regularly at the Rubaiyat, a dinner/bar/club on First Street, since summer of 1968. The crowds keep on coming back to the Rubaiyat, one of the few places you'll ever see middle-aged couples really shake their asses alongside confirmed boogie maniacs.

With 16-year-old daughter Liz Bell holding down the rhythm section, and powerful Derek Pierson on bass, lead guitar, standup bass, light and sound controls--all simultaneously--the Adventure prompted one of the most enthusiastic responses at last summer's free concerts, where they've performed each of the past three years.

Iris, who by the way is a young 39 years old, talked to the SUN about her music:

"You don't have to drive a truck or pick cotton to have the blues, It's when things make you want to wail, so instead of crying or lying on the floor you sing out the hurt.

"There are thousands of blues--happy, sad, sexual--whatever. And blues is really the People's music. Once upon a time somebody beat a stick on the ground and did it in rhythm, over and over, and somebody else started singing. That's all--that's how it started.

"The whole country is being exposed to influences I sought out for myself when I was fourteen years old. I listened to black stations, black music, bought black records at a time when it was called "race music." I went to the concert dances with big black revues featuring people like Lionel Hampton and Ray Charles and Chuck Berry and the Clovers singing "Your Cash Ain't Nothin' But Trash," and such. That was when only about one percent of the audience for black music was white people--late 40's and early 50's in Mississippi, Kentucky, West Virginia. White stations--they rarely played that music except if you called up and asked them to find the records, which I did."

Together the band has recorded and released two original tunes Iris wrote for her own label, High-Class Records, with side A, "One Strong Woman" leaning towards strong R&R, and side B, "I'd Rather Live Without You Than Play Your Honky Games," jazz oriented.

In addition to Iris' own material, the Adventure plays a wide variety of music, from slow hold-close ballads aimed at the older set to really fine arrangements of current Stevie Wonder, Stephen Stills, Sly Stone and even Herbie Hancock. "I play all kinds of music because there's all kinds of people. It's all leading us to the same place. Higher."

Liz Bell, a 16-year-old veteran of the Ann Arbor Public Schools (she escaped with her diploma two years early) is a self-taught drummer who joined her mother's band after two other rhythm people didn't work out.

Liz is a veteran of countless antiwar demonstrations, and has worked in various ways on the SUN, the Tribal Council Radio Workshop, the old Tribal Network, and also dabbled a while in the Rainbow Press. She once crashed a White House Conference on Children because only one "child" from the whole country had been invited to it.

And she can really play those skins.

Derek Pierson, bassist-guitarist for the group, is a very quiet personality who plays a very mean and piercing fender. At times he pulls up a stand-up bass to make it sing, and all the while is operating the lighting and PA system he built for the group, controlled by his feet with pushbuttons on the floor.

"I was raised in Charleston, W. Virginia," Derek said, "and joined Iris when I was 20. We played the best clubs in town, most of which were named after familiar forest animals. We left after three years when we realized that such bizarre innovations as amplified voices and instruments, a bass that looks like a guitar, and a band with no clarinet were not going to make it in that area within the next decade. We were on the road for a while then came to the Rubaiyat, where people don't ask us to play "Hello, Dolly" five times a night."

Iris and the Adventure can be heard at the Rubaiyat, 102 S. First St., Wednesdays through Sundays starting at 9:30 pm (10 on Saturdays). "One Strong Woman" b/w "Honky Games" can be found at World Headquarters and Discount Records on State St. in Ann Arbor.