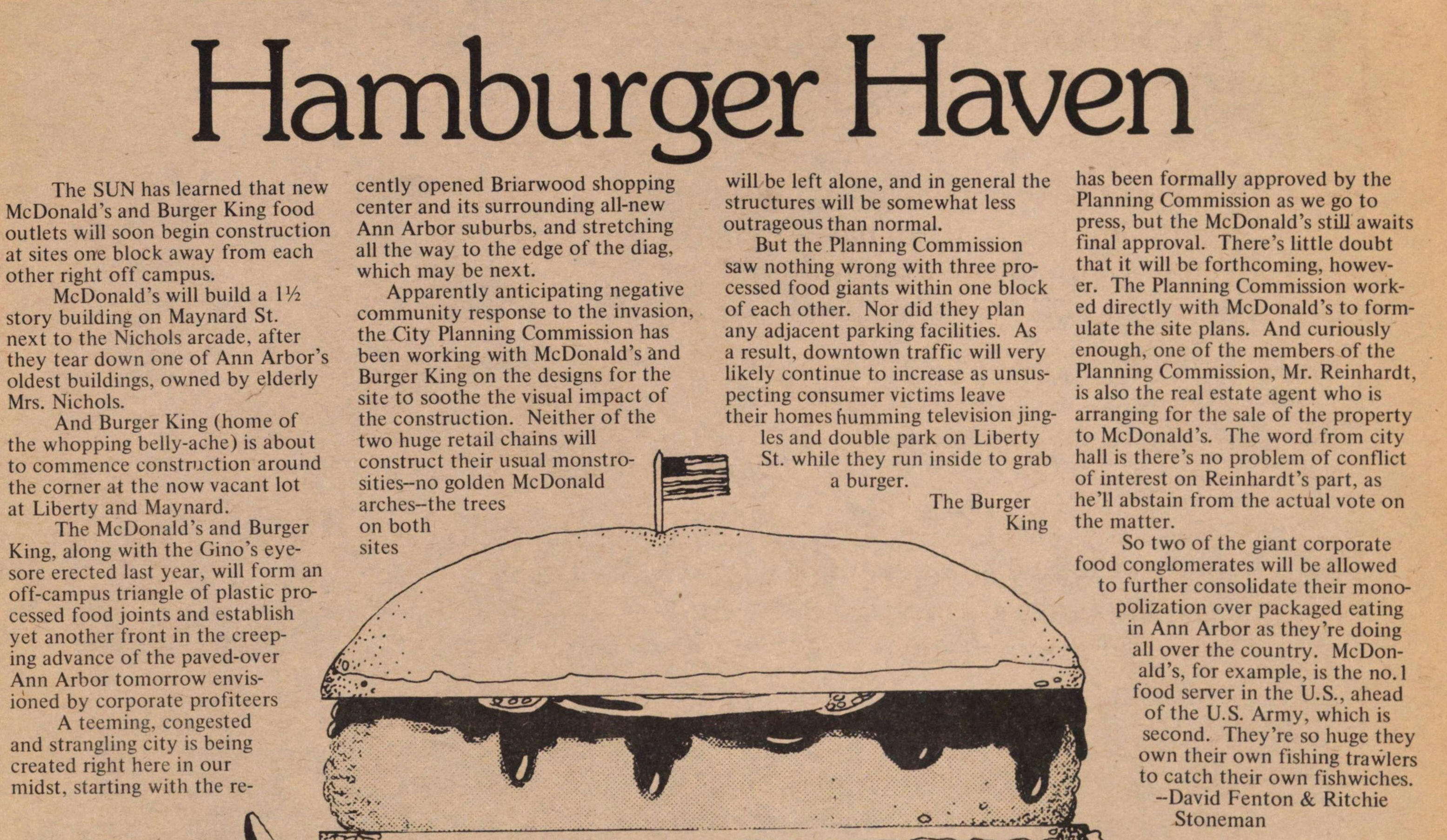 The SUN has learned that new McDonald's and Burger King food outlets will soon begin construction at sites one block away from each other right off campus.

McDonald's will build a 1 1/2 story building on Maynard St. next to the Nichols arcade, after they tear down one of Ann Arbor's oldest buildings, owned by elderly Mrs. Nichols.

And Burger King (home of the whopping belly-ache) is about to commence construction around the corner at the now vacant lot at Liberty and Maynard.

The McDonald's and Burger King, along with the Gino's eyesore erected last year, will form an off-campus triangle of plastic processed food joints and establish yet another front in the creeping advance of the paved-over Ann Arbor tomorrow envisioned by corporate profiteers.

A teeming. congested and strangling city is being created right here in our midst. starting with the recently opened Briarwood shopping center and its surrounding all-new Ann Arbor suburbs. and stretching all the way to the edge of the diag, which may be next.

Apparently anticipating negative community response to the invasion, the City Planning Commission has been working with McDonald's and Burger King on the designs for the site to soothe the visual impact of the construction. Neither of the two huge retail chains will construct their usual monstrosities-no golden McDonald arches-the trees on both sites - will be left alone, and in general the structures will be somewhat less outrageous than normal.

But the Planning Commission saw nothing wrong with three processed food giants within one block of each other. Nor did they plan any adjacent parking facilities. As a result, downtown traffic will very likely continue to increase as unsuspecting consumer victims leave their homes humming television jingles and double park on Liberty St. while they run inside to grab a burger.

The Burger King has been formally approved by the Planning Commission as we go to press, but the McDonald's still awaits final approval. There's little doubt that it will be forthcoming, however. The Planning Commission worked directly with McDonald's to formulate the site plans. And curiously enough, one of the members of the Planning Commission, Mr. Reinhardt, is also the real estate agent who is arranging for the sale of the property to McDonald's. The word from city hall is there's no problem of conflict of interest on Reinhardt's part, as he'll abstain from the actual vote on the matter.

So two of the giant corporate food conglomerates will be allowed to further consolidate their monopolization over packaged eating in Ann Arbor as they're doing all over the country. McDonald's, for example, is the no. 1 food server in me U.S., ahead of the U.S. Army, which is second. They're so huge they own their own fishing trawlers to catch their own fishwiches.