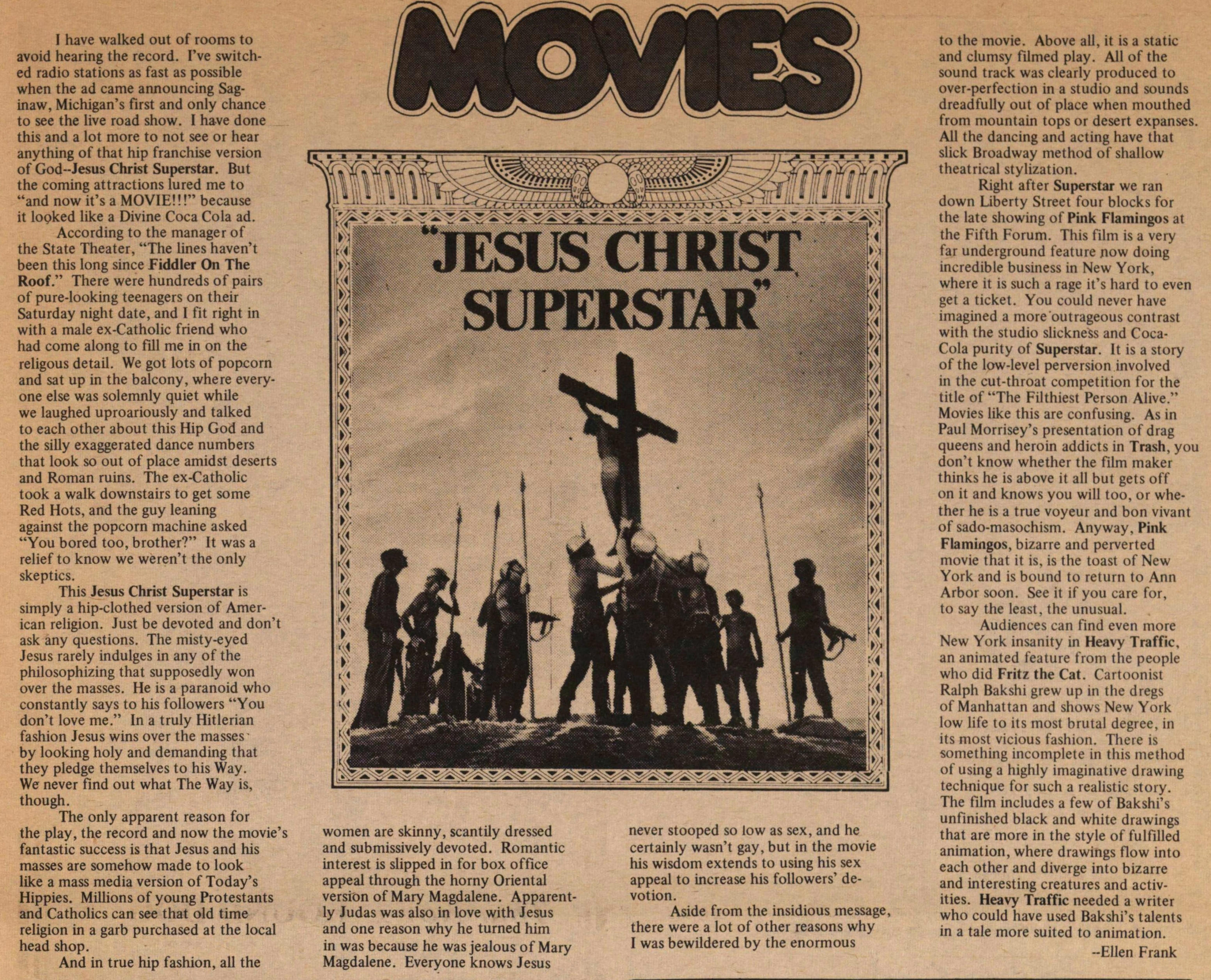 I have walked out of rooms to avoid hearing the record. I've switched radio stations as fast as possible when the ad came announcing Saginaw, Michigan's first and only chance to see the live road show. I have done this and a lot more to not see or hear anything of that hip franchise version of God--Jesus Christ Superstar. But the coming attractions lured me to "and now it's a MOVIE!" because it looked like a Divine Coca Cola ad.

According to the manager of the State Theater, "The lines haven't been this long since Fiddler On The Roof." There were hundreds of pairs of pure-looking teenagers on their Saturday night date, and I fit right in with a male ex-Catholic friend who had come along to fill me in on the religious detail. We got lots of popcorn and sat up in the balcony, where everyone else was solemnly quiet while we laughed uproariously and talked to each other about this Hip God and the silly exaggerated dance numbers that look so out of place amidst deserts and Roman ruins. The ex-Catholic took a walk downstairs to get some Red Hots, and the guy leaning against the popcorn machine asked "You bored too, brother?" It was a relief to know we weren't the only skeptics.

This Jesus Christ Superstar is simply a hip-clothed version of American religion. Just be devoted and don't ask any questions. The misty-eyed Jesus rarely indulges in any of the philosophizing that supposedly won over the masses. He is a paranoid who constantly says to his followers "You don't love me." In a truly Hitlerian fashion Jesus wins over the masses by looking holy and demanding that they pledge themselves to his Way. We never find out what The Way is, though.

The only apparent reason for the play, the record and now the movie's fantastic success is that Jesus and his masses are somehow made to look like a mass media version of Today' s Hippies. Millions of young Protestants and Catholics can see that old time religion in a garb purchased at the local head shop.

Aside from the insidious message, there were a lot of other reasons why I was bewildered by the enormous to the movie. Above all, it is a static and clumsy filmed play. All of the sound track was clearly produced to over-perfection in a studio and sounds dreadfully out of place when mouthed from mountain tops or desert expanses. All the dancing and acting have that slick Broadway method of shallow theatrical stylization.

Right after Superstar we ran down Liberty Street four blocks for the late showing of Pink Flamingos at the Fifth Forum. This film is a very far underground feature now doing incredible business in New York, where it is such a rage it's hard to even get a ticket. You could never have imagined a more outrageous contrast with the studio slickness and Coca-Cola purity of Superstar. It is a story of the low-level perversion involved in the cut-throat competition for the title of "The Filthiest Person Alive." Movies like this are confusing. As in Paul Morrisey's presentation of drag queens and heroin addicts in Trash, you don't know whether the film maker thinks he is above it all but gets off on it and knows you will too, or whether he is a true voyeur and bon vivant of sado-masochism. Anyway, Pink Flamingos, bizarre and perverted movie that it is, is the toast of New York and is bound to return to Ann Arbor soon. See it if you care for, to say the least, the unusual.

Audiences can find even more New York insanity in Heavy Traffic, an animated feature from the people who did Fritz the Cat. Cartoonist Ralph Bakshi grew up in the dregs of Manhattan and shows New York low life to its most brutal degree, in its most vicious fashion. There is something incomplete in this method of using a highly imaginative drawing technique for such a realistic story. The film includes a few of Bakshi's unfinished black and white drawings that are more in the style of fulfilled animation, where drawings flow into each other and diverge into bizarre and interesting creatures and activities. Heavy Traffic needed a writer who could have used Bakshi's talents in a tale more suited to animation.