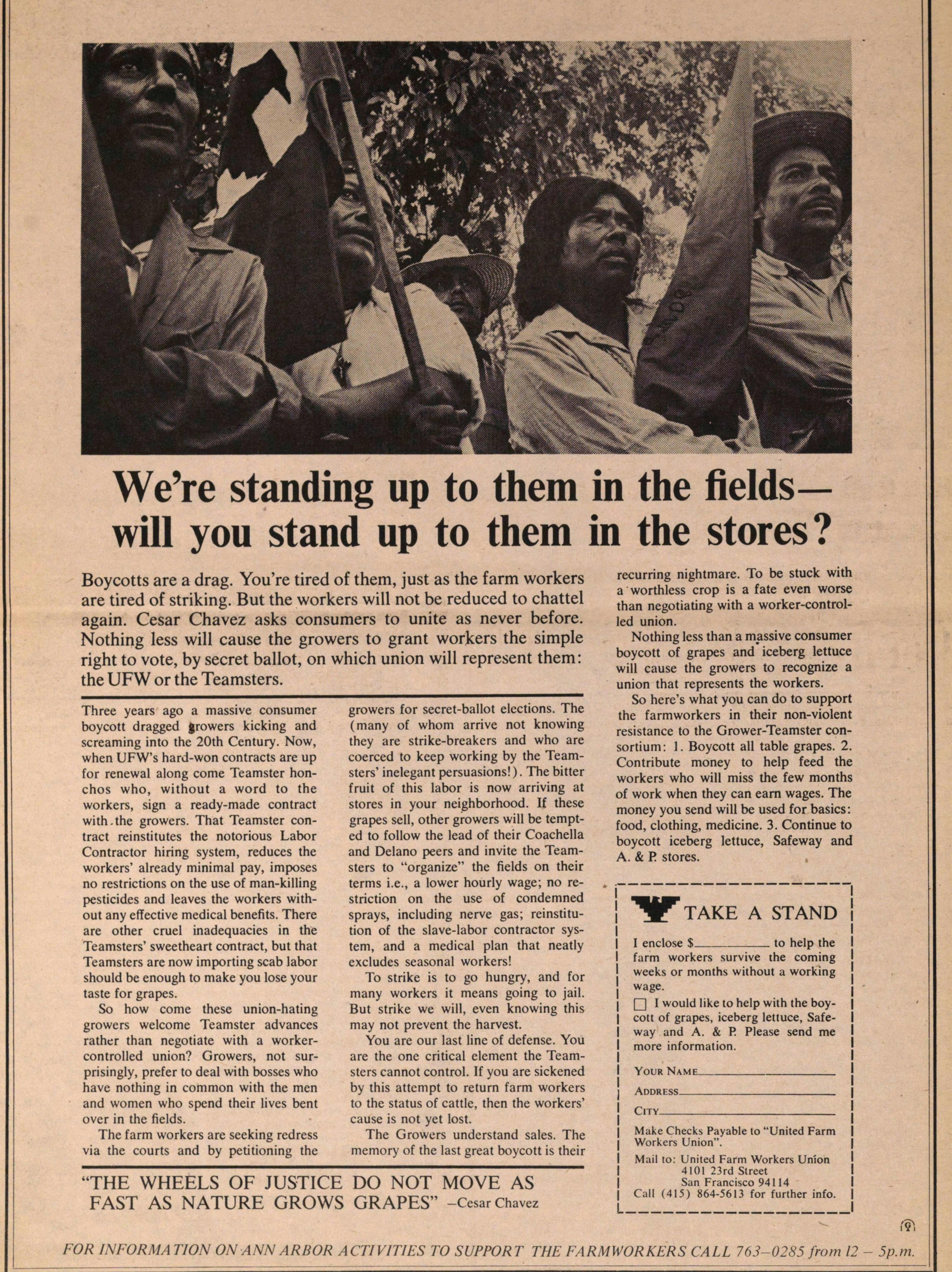 Boycotts are a drag. You're tired of them, just as the farm workers are tired of striking. But the workers will not be reduced to chattel again. Cesar Chavez asks consumers to unite as never before. Nothing less will cause the growers to grant workers the simple right to vote, by secret ballot, on which union will represent them: the UFW or the Teamsters.

Three years ago a massive consumer boycott dragged growers kicking and screaming into the 20th Century. Now, when UFW's hard-won contracts are up for renewal along come Teamster honchos who, without a word to the workers, sign a ready-made contract with the growers. That Teamster contract reinstitutes the notorious Labor Contractor hiring system, reduces the workers' already minimal pay, imposes no restrictions on the use of man-killing pesticides and leaves the workers without any effective medical benefits. There are other cruel inadequacies in the Teamsters' sweetheart contract, but that Teamsters are now importing scab labor should be enough to make you lose your taste for grapes.

So how come these union-hating growers welcome Teamster advances rather than negotiate with a worker-controlled union? Growers, not surprisingly, prefer to deal with bosses who have nothing in common with the men and women who spend their lives bent over in the fields.

The farm workers are seeking redress via the courts and by petitioning the growers for secret-ballot elections. The (many of whom arrive not knowing they are strike-breakers and who are coerced to keep working by the Teamsters' inelegant persuasions!). The bitter fruit of this labor is now arriving at stores in your neighborhood. If these grapes sell, other growers will be tempted to follow the lead of their Coachella and Delano peers and invite the Teamsters to "organize" the fields on their terms i.e., a lower hourly wage; no restriction on the use of condemned sprays, including nerve gas; reinstitution of the slave-labor contractor system, and a medical plan that neatly excludes seasonal workers!

To strike is to go hungry, and for many workers it means going to jail. But strike we will, even knowing this may not prevent the harvest.

You are our last line of defense. You are the one critical element the Teamsters cannot control. If you are sickened by this attempt to return farm workers to the status of cattle, then the workers' cause is not yet lost.

The Growers understand sales. The memory of the last great boycott is their recurring nightmare. To be stuck with a worthless crop is a fate even worse than negotiating with a worker-controlled union.

Nothing less than a massive consumer boycott of grapes and iceberg lettuce will cause the growers to recognize a union that represents the workers.

So here's what you can do to support the farmworkers in their non-violent resistance to the Grower-Teamster consortium: 1. Boycott all table grapes. 2. Contribute money to help feed the workers who will miss the few months of work when they can earn wages. The money you send will be used for basics: food, clothing, medicine. 3. Continue to boycott iceberg lettuce, Safeway and A. & P. stores.

I enclose $__________ to help the farm workers survive the coming weeks or months without a working wage.

□ I would like to help with the boycott of grapes, iceberg lettuce, Safeway and A. & P. Please send me more information.