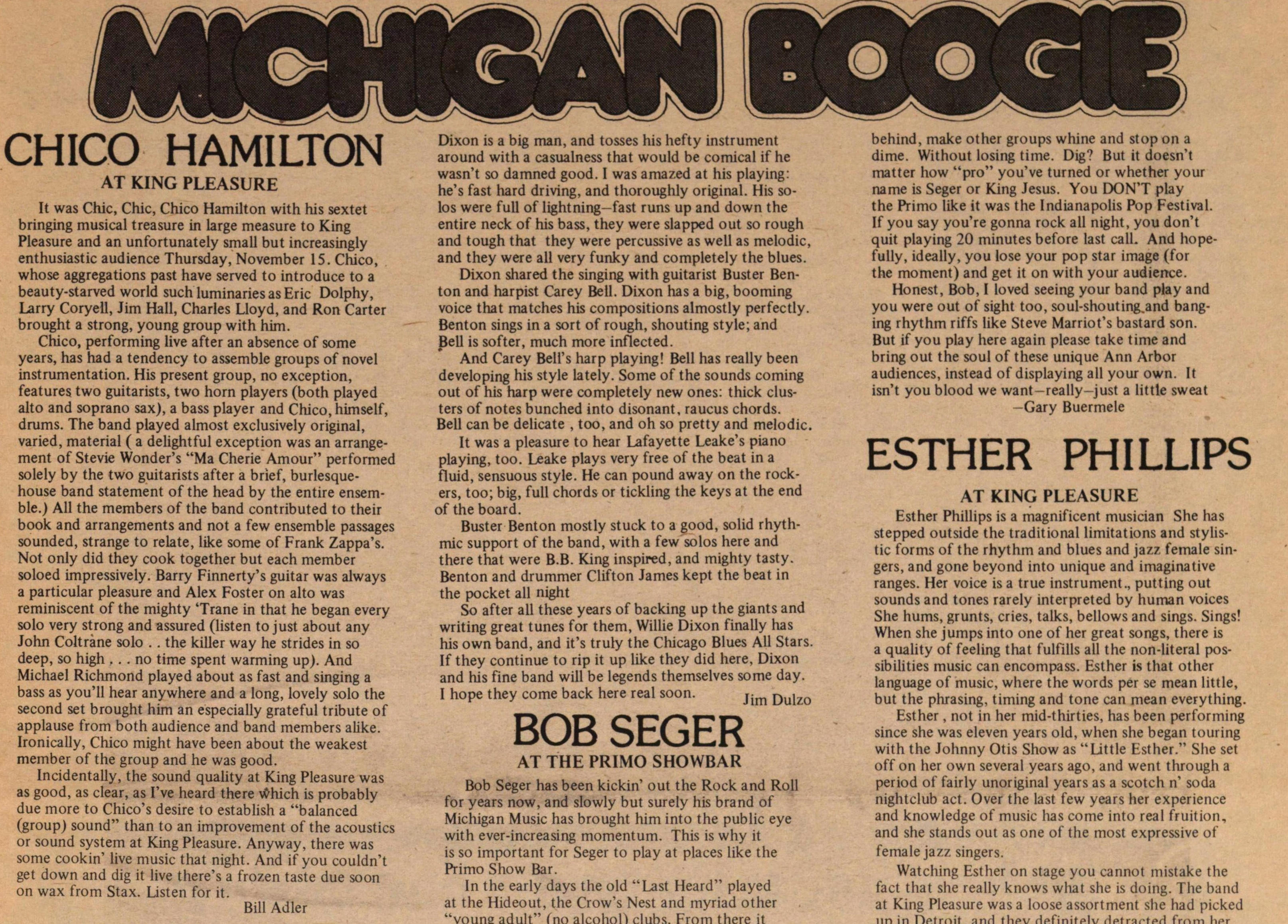 It was Chic, Chic, Chico Hamilton with his sextet bringing musical treasure in large measure to King Pleasure and an unfortunately small but increasingly enthusiastic audience Thursday, November 15. Chico, whose aggregations past have served to introduce to a beauty-starved world such luminaries as Eric Dolphy, Larry CoryeU, Jim Hall, Charles Lloyd, and Ron Carter brought a strong, young group with him. Chico, performing live after an absence of some years, has had a tendency to assemble groups of novel instrumentation. His present group, no exception, features two guitarists, two horn players (both played alto and soprano sax), a bass player and Chico, himself, drums. The band played almost exclusively original, varied, material ( a delightful exception was an arrangement of Stevie Wonder's "Ma Cherie Amour" performed solely by the two guitarists after a brief, burlesquehouse band statement of the head by the entire ensemble.) All the members of the band contributed to their book and arrangements and not a few ensemble passages sounded, strange to relate, like some of Frank Zappa's. Not only did they cook together but each member soloed impressively. Barry Finnerty's guitar was always a particular pleasure and Alex Foster on alto was reminiscent of the mighty 'Trane in that he began every solo very strong and assured (listen to just about any John Coltráne solo . . the killer way he strides in so deep, so high . . . no time spent warming up). And Michael Richmond played about as fast and singing a bass as you'll hear anywhere and a long, lovely solo the second set brought him an especially grateful tribute of applause from both audience and band members alike. Ironically, Chico might have been about the weakest member of the group and he was good. Incidentally, the sound quality at King Pleasure was as good, as clear, as I've heard the re which is probably due more to Chico's desire to establish a "balanced (group) sound" than to an improvement of the acoustics or sound system at King Pleasure. Anyway, there was some cookin' live music that night. And if you couldn't get down and dig it live there's a frozen taste due soon on wax from Stax. Listen for it.