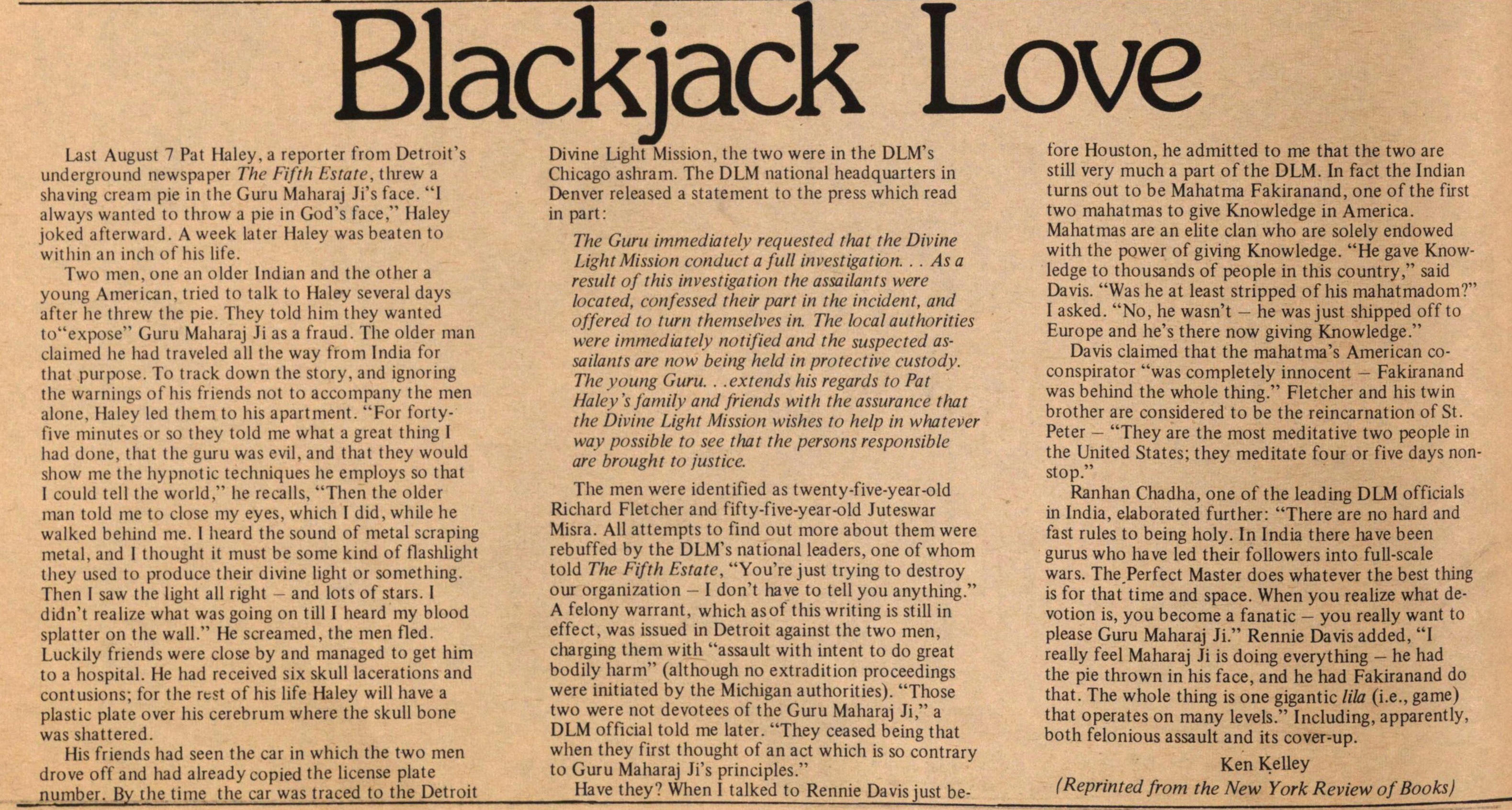 Last August 7 Pat Haley, a reporter from Detroit s underground newspaper The Ftfth Estáte, tlirew a shaving cream pie in the Guru Maharaj Ji's face. "I always wanted to throw a pie in God's face," Haley joked afterward. A week later Haley was beaten to within an inch of his life. Two men, one an older Indian and the other a young American, tried to talk to Haley several days after he threw the pie. They told him they wanted to"expose" Guru Maharaj Ji as a fraud. The older man claimed he had traveled all the way from India for that purpose. To track down the story, and ignoring the warnings of his friends not to accompany the men alone, Haley led them to his apartment. "For fortyfive minutes or so they told me what a great thing I had done, that the guru was evil, and that they would show me the hypnotic techniques he employs so that I could teil the world," he recalls, "Then the older man told me to close my eyes, which I did, while he walked behind me. I heard the sound of metal scraping metal, and I thought it must be some kind of flashlight they used to produce their divine light or something. Then I saw the light all right - and lots of stars. I didn't realize what was going on till I heard my blood splatter on the wall." He screamed, the men fled. Luckily friends were close by and managed to get him to a hospital. He had received six skull lacerations and contusions; for the rest of his life Haley will have a plastic plate over his cerebrum where the skull bone was shattered. His friends had seen the car in which the two men drove off and had already copied the license plate mimher Rv the time the iar was traced to the Detroit Divine Light Mission, the two were in the DLM s Chicago ashram. The DLM national headquarters in Denver released a statement to the press which read in part: The Gurú immcdiately requested that the Divine Light Mission conduct a full investigation. . . As a result of this investigation the assailants were located, confessed their part in the incident, and offered to turn themselves in. The local authorities were immediately notified and the suspected assailants are now being held in protective custody. The young Gum. . .extends kis regards to Pat Haley 's jamily and friends with the assurance that the Divine Light Mission wishes to help in whatever way possible to see that the persons responsible are brought to jus tice. The men were identified as twenty-five-year-old Richard Fletcher and fifty-five-year-old Juteswar Misra. All attempts to find out more about them were rebuffed by the DLM's national leaders, one of whom told The Fifth Estáte, "You're just trying to destroy our organization - I don't have to teil you anything." A felony warrant, which as of this writing is still in effect, was issued in Detroit against the two men, charging them with "assault with intent to do great bodily harm" (although no extradition proceedings were initiated by the Michigan authorities). "Those two were not devotees of the Gurú Maharaj Ji," a DLM official told me later. "They ceased being that when they first thought of an act which is so contrary to Guru Maharaj Ji's principies." Have they? When I talked to Rennie Da vis just tore Houston, he admitted to me that the two are still very much a part of the DLM. In fact the Indian turns out to be Mahatma Fakiranand, one of the first two mahatmas to give Knowledge in America. Mahatmas are an elite clan who are solely endowed with the power of giving Knowledge. "He gave Knowledge to thousands of people in this country," said Davis. "Was he at least stripped of his mahatmadom?" I asked. "No, he wasn't - he was just shipped off to Europe and he's there now giving Knowledge." Davis claimed that the mahatma's American coconspirator "was completely innocent - Fakiranand was behind the whole thing." Fletcher and his twin brother are considered to be the reincarnation of St. Peter - "They are the most meditative two people in the United States; they medítate four or five days nonstop." Ranhan Chadha, one of the leading DLM officials in India, elaborated further: "There are no hard and fast rules to being holy. In India there have been gurus who have led their followers into full-scale wars. The.Perfect Master does whatever the best thing is for that time and space. When you realize what devotion is, you become a fanatic - you really want to please Guru Maharaj Ji." Rennie Davis added, "I really feel Maharaj Ji is doing everything - he had the pie thrown in his face, and he had Fakiranand do that. The whole thing is one gigantic lila (i.e., game) that operates on many levéis." Including, apparently, both felonious assault and its cover-up. ( Reprint ed f rom the New York Review ofBooksj