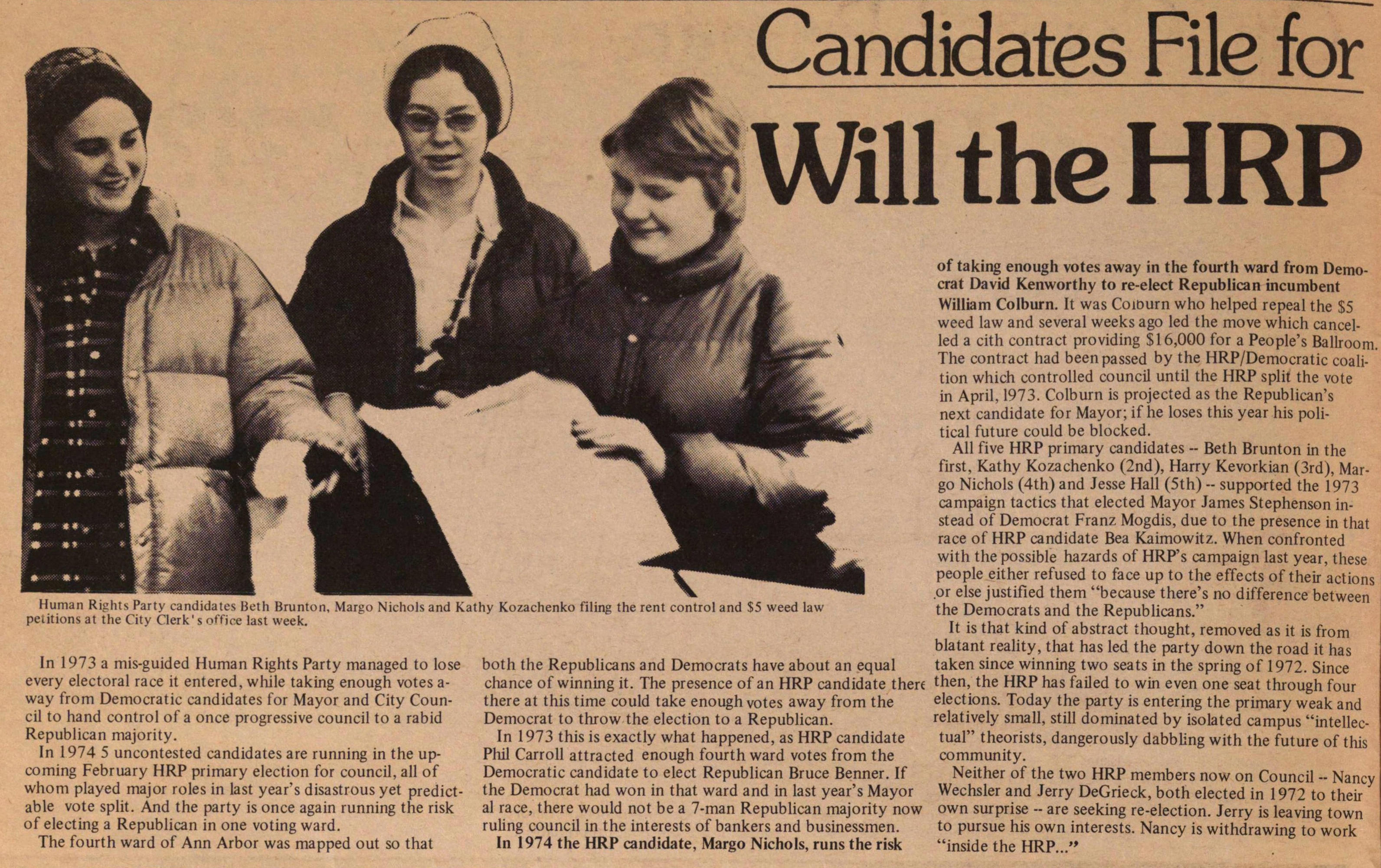 In 1973 a mis-guided Human Rights Party managed to lose every electoral race it entered, while taking enough votes away from Democratic candidates for Mayor and City Council to hand control of a once progressive council to a rabid Republican majority.

In 1974 5 uncontested candidates are running in the upcoming February HRP primary election for council, all of whom played major roles in last year's disastrous yet predictable vote split. And the party is once again running the risk of electing a Republican in one voting ward.

The fourth ward of Ann Arbor was mapped out so that both the Republicans and Democrats have about an equal chance of winning it. The presence of an HRP candidate there at this time could take enough votes away from the Democrat to throw the election to a Republican.

In 1973 this is exactly what happened, as HRP candidate Phil Carroll attracted enough fourth ward votes from the Democratic candidate to elect Republican Bruce Benner. If the Democrat had won in that ward and in last year's Mayoral race, there would not be a 7-man Republican majority now ruling council in the interests of bankers and businessmen.

In 1974 the HRP candidate, Margo Nichols, runs the risk of taking enough votes away in the fourth ward from Democrat David Kenworthy to re-elect Republican incumbent William Colburn. It was Coiourn who helped repeal the $5 weed law and several weeks ago led the move which cancelled a city contract providing $16,000 for a People's Ballroom. The contract had beenpassed by the HRP/Democratic coalition which controlled council until the HRP split the vote in April, 1973. Colburn is projected as the Republican's next candidate for Mayor; if he loses this year his political future could be blocked.

All five HRP primary candidates - Beth Brunton in the first, Kathy Kozachenko (2nd), Harry Kevorkian (3rd), Margo Nichols (4th) and Jesse Hall (5th) -- supported the 1973 campaign tactics that elected Mayor James Stephenson instead of Democrat Franz Mogdis, due to the presence in that race of HRP candidate Bea Kaimowitz. When confronted with the possible hazards of HRP's campaign last year, these people either refused to face up to the effects of their actions or else justified them "because there's no difference between the Democrats and the Republicans."

It is that kind of abstract thought, removed as it is from blatant reality, that has led the party down the road it has taken since winning two seats in the spring of 1972. Since then, the HRP has failed to win even one seat through four elections. Today the party is entering the primary weak and relatively small, still dominated by isolated campus "intellectual" theorists, dangerously dabbling with the future of this community.

Neither of the two HRP members now on Council -- Nancy Wechsler and Jerry DeGrieck, both elected in 1972 to their own surprise -- are seeking re-election. Jerry is leaving town to pursue his own interests. Nancy is withdrawing to work "inside the HRP..."