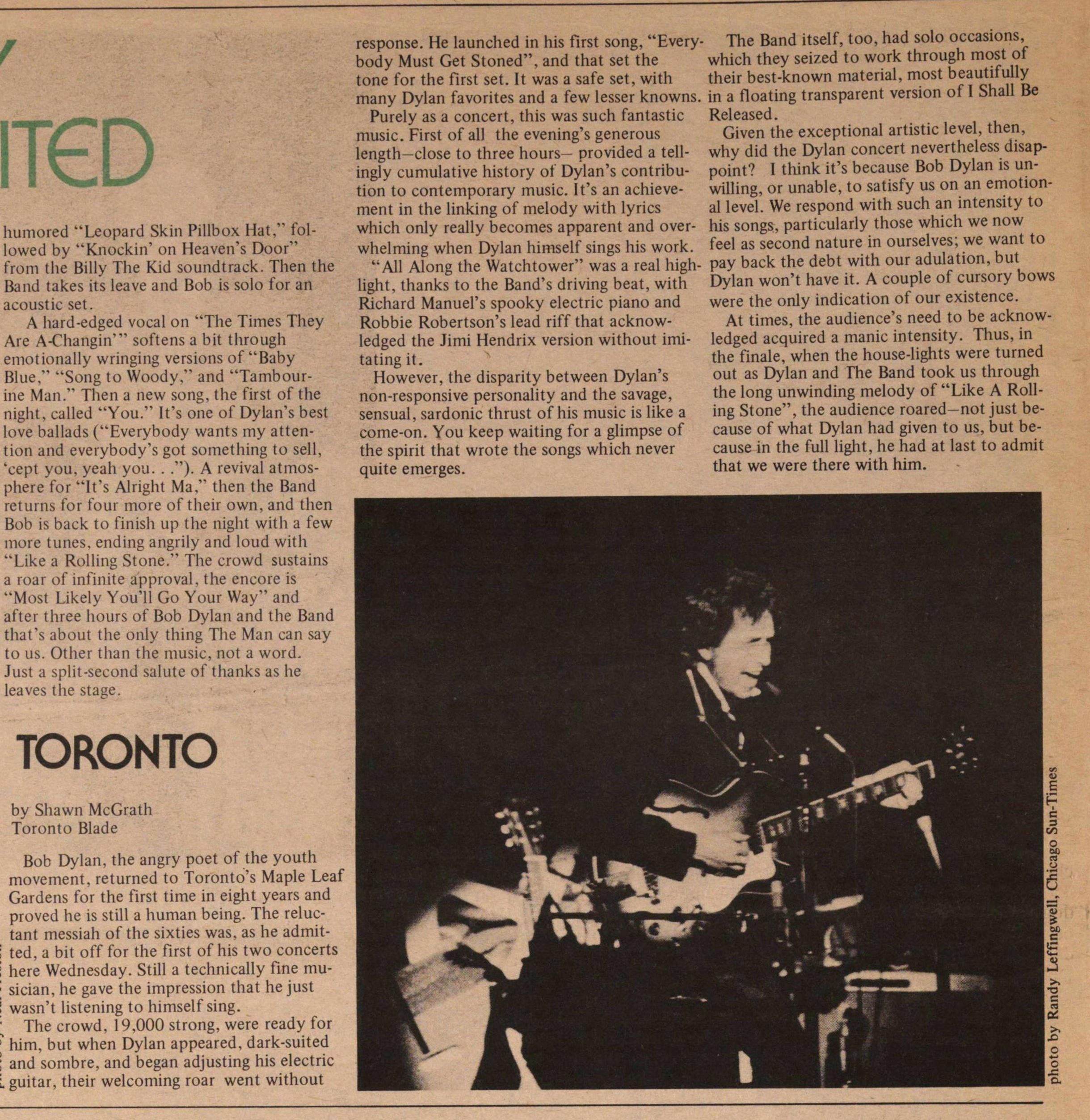 Bob Dylan, the angry poet of the youth movement, returned to Toronto's Maple Leaf I Gardens for the first time in eight years and proved he is still a human being. The reluctant messiah of the sixties was, as he admitted. a bit off for the first of his two concerts here Wednesday. Still a technically fine musician, he gave the impression that he just wasn't listening to himself sing. The crowd, 19,000 strong, were ready for him. but when Dylan appeared, dark-suited and sombre, and began adjusting his electric guitar, their welcoming roar went without response. He launched in his first song, "Every body Must Get Stoned", and that set the tone for the fust set. It was a safe set, with many Dylan favorites and a few lesser knowns. Purely as a concert, this was such fantastic music. First of all the evening's generous length-close to three provided a tellingly cumulative history of Dylan's contribution to contemporary music. It's an achievement in the linking of melody with lyrics which only really becomes apparent and overwhelming when Dylan himself sings his work. '"All Along the Watchtower" was a real highliglit, thanks to the Band's driving beat, with Richard Manuel's spooky electric piano and Robbie Robertson's lead riff that acknowledged the Jimi Hendrix version without imitatingit. However, the disparity between Dylan's non-responsive personality and the savage, sensual, sardonic thrust of his music is like a come-on. You keep waiting for a glimpse of the spirit that wrote the songs which never quite emerges. The Band itself, too, had solo occasions, which they seized to work through most of their best-known material, most beautifully in a floating transparent version of I Shall Be Released. Given the exceptional artistic level, then, why did the Dylan concert nevertheless disappoint? I think it's because Bob Dylan is unwilling, or unable, to satisfy us on an emotional level. We respond with such an intensity to his songs, particularly those which we now feel as second nature in ourselves; we want to pay back the debt with our adulation, but Dylan won't have it. A couple of cursory bows were the only indication of our existence. At times, the audience's need to be acknowledged acquired a manie intensity. Thus, in the finale, when the house-lights were turned out as Dylan and The Band took us through the long unwinding melody of "Like A Rolling Stone", the audience roared-not just because of what Dylan had given to us, but because in the full light, he had at last to admit that we were there with him.