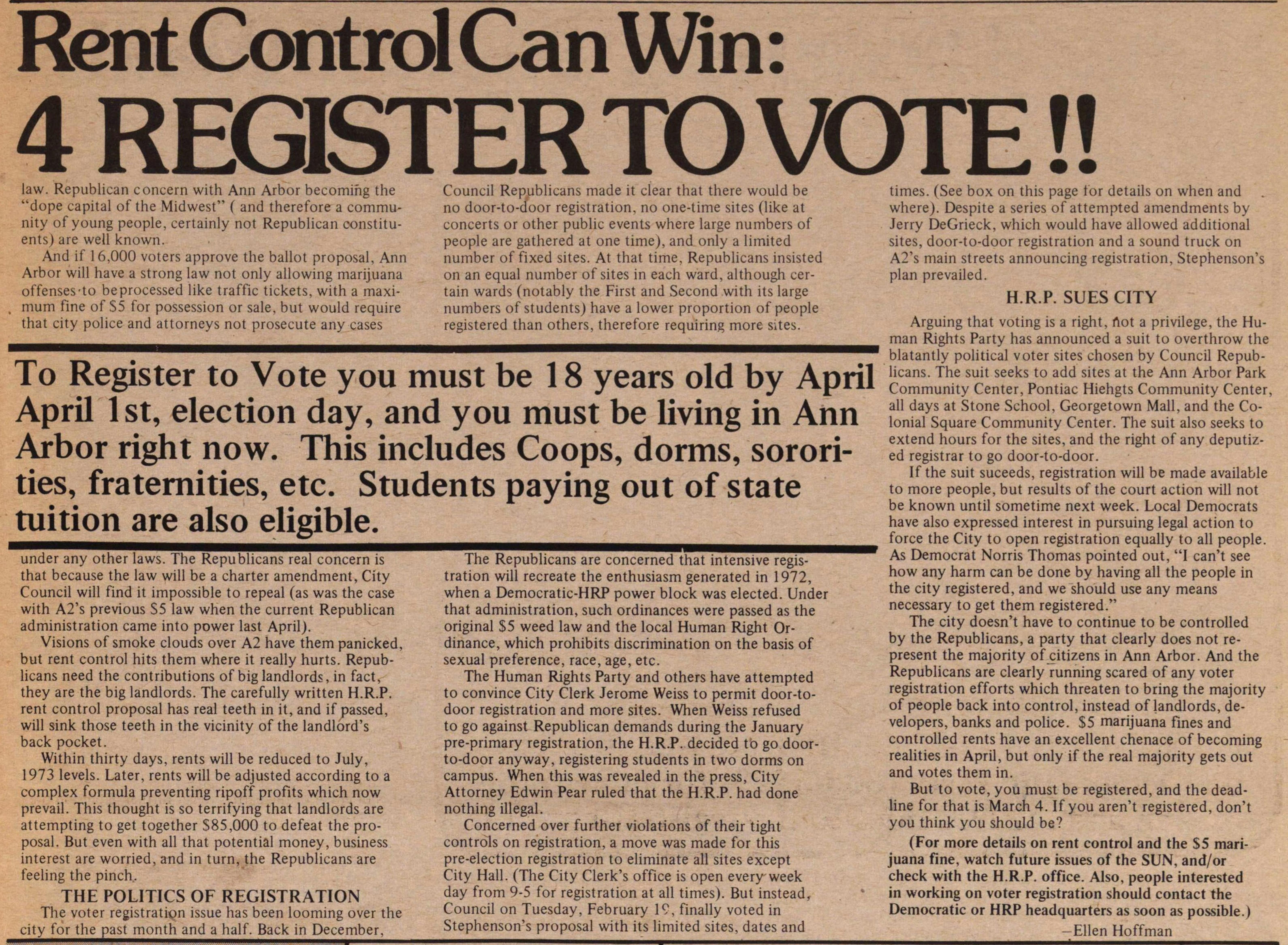 law. Republican concern with Ann Arbor becomihg the "dope capital of the Midwest" ( and therefore a community of young people, certainly not Republican constituents) are well known. And if 16,000 voters approve the ballot proposal, Ann Arbor will have a strong law not only allowing marijuana offenses-to beprocessed like traffic tickets, with a maxi. mum fine of S5 for possession or sale, but would require that city pólice and attorneys not prosecute any cases under any other laws. The Republicans real concern is that because the law will be a charter amendment, City Council will find it impossible to repeal (as was the case with A2's previous S5 law when the current Republican administration came into power last April). Visions of smoke clouds over A2 have them panicked. but rent control hits them where it really hurts. Republicans need the contributions of biglandlords, in fact, they are the big landlords. The carefully written H.R.P. rent control proposal has real teeth in it, and if passed, will sink those teeth in the vicinity of the landlord's back pocket. Within thirty days, rents will be reduced to July, 1973 levéis. Later, rents will be adjusted according to a complex formula preventing ripoff profits which now prevail. This thought is so terrifying that landlords are attempting to get together S85,000 to defeat the proposal. But even with all that potential money, business interest are worried, and in turn, the Republicans are feeling the pinch, THE POLITICS OF REGISTRATION The voter registration issue has been looming over the city for the past month and a half. Back in December, Council Republicans made it clear that there would be no door-to-door registration, no one-time sites (like at concerts or other public events where large numbers of people are gathered at one time), and only a limited number of fixed sites. At that time. Republicans insisted on an equal number of sites in each ward, although certain wards (notably the First and Second with its large numbers of students) have a lower proportion of people registered than others, therefore requiring more sites. The Republicans are concerned that intensive registration will recréate the enthusiasm generated in 1972, when a Democratic-HRP power block was elected. Under that administration, such ordinances were passed as the original S5 weed law and the local Human Right Ordinance, which prohibits discrimination on the basis of sexual preference, race, age, etc. The Human Rights Party and others have attempted to convince City Clerk Jerome Weiss to permit door-todoor registration and more sites. When Weiss refused to go against Republican demands during the January pre-primary registration, the H.R.P. decided to go doorto-door anyway, registering students in two dorms on campus. When this was revealed in the press, City Attorney Edwin Pear ruled that the H.R.P. had done nothing illegal. Concerned over further violations of their tight contröls on registration, a move was made for this pre-election registration to elimínate all sites except City Hall. (The City Clerk's office is open every week day from 9-5 for registration at all times). But instead, Council on Tuesday, February 19, finally voted in Stephenson's proposal with its limited sites, dates and times. (See box on this page tor details on when and where). Despite a series of attempted amendments by Jerry DeGrieck, which would have allowed additional sites, door-to-door registration and a sound truck on A2's main streets announcing registration, Stephenson's plan prevailed. H.R.P. SUES CITY Arguing that voting is a right, ftot a privilege, the Human Rights Party has announced a suit to overthrow the blatantly political voter sites chosen by Council Republicans. The suit seeks to add sites at the Ann Arbor Park Community Center, Pontiac Hiehgts Community Center, all days at Stone School. Georgetown Mali, and the Colonial Square Community Center. The suit also seeks to extend hours for the sites, and the right of any deputized registrar to go door-to-door. If the suit suceeds, registration will be made available to more people, but results of the court action will not be known until sometime next week. Local Democrats have also expressed interest in pursuing legal action to force the City to open registration equally to all people. As Democrat Norris Thomas pointed out, "I can't see how any harm can be done by having all the people in the city registered, and we should use any means necessary to get them registered." The city doesn't have to continue to be controlled by the Republicans, a party that clearly does not represent the majority ofitizens in Ann Arbor. And the Republicans are clearly running scared of any voter registration efforts which threaten to bring the majority of people back into control, instead of landlords, developers, banks and pólice. $5 marijuana fines and controlled rents have an excellent chenace of becoming realities in April, but only if the real majority gets out and votes them in. But to vote, you must be registered, and the deadline for that is March 4. If you aren't registered, don't you think you should be? (For more details on rent control and the S5 marijuana fine, watch future issues of the SUN, andor check with the H.R.P. office. Also, people interested in working on voter registration should contact the Democratie or HRP headquarters as soon as possible.) To Register to Vote you must be 1 8 years old by April April lst, election day, and you must be living in Ann Arbor right now. This includes Coops, dorms, sororities, fraternities, etc. Students paying out of state tuition are also eligible.