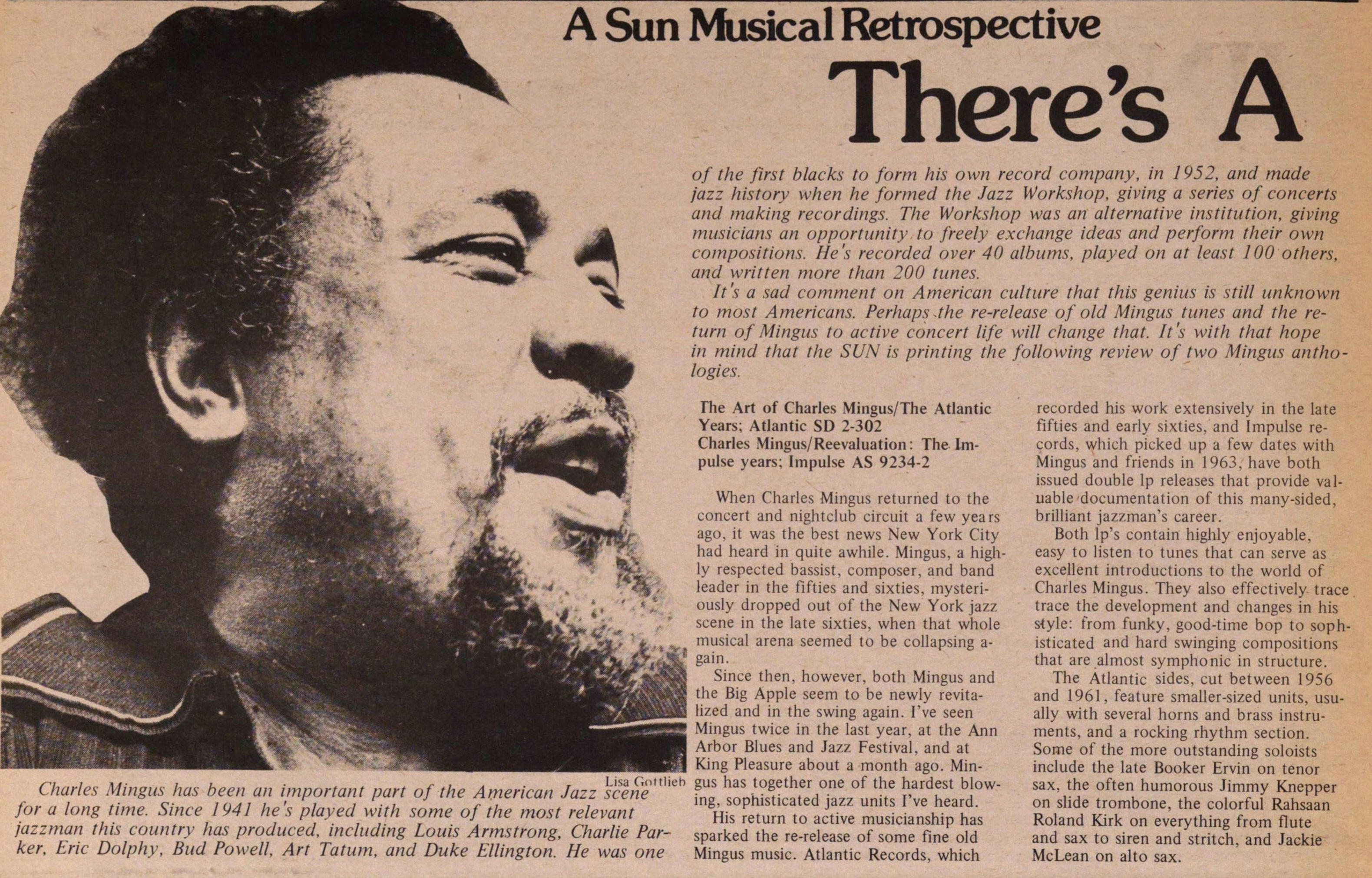 Charles MingüS lias heen au important part of the American Jazz scène for a long time. Since 1941 he's played with some of the most relevant jazzman this country has produced, including Louis Armstrong, Charlie Parker, Eric Dolphy, Bud Powell, Art Tatum, and Duke Ellington. He was one of the first blacks to form his own record company, in 1952, and made jazz history when lie formed the Jazz Workshop, giving a series of concerts and making recordings. The Workshop was an alternative institution, giving musicians an opportunity to freely exchange ideas and perform their own compositions. He 's recorded over 40 albums, played on at least 100 others, and written more than 200 tunes. It's a sad comment on American culture that this genius is still unknown to most Americans. Perhaps.the re-release of old Mingus tunes and the return of Mingus to active concert Ufe will change that. It 's with that hope in mind that tlie SUN is printing the following review of two Mingus anthologies. The Art of Charles MingusThe Atlantic Years; Atlantic SD 2-302 Charles MingusReevaluation : The Impulse years; Impulse AS 9234-2 When Charles Mingus returned to the concert and nightclub circuit a few years ago, it was the best news New York City had heard in quite awhile. Mingus, a highly respected bassist, composer, and band leader in the fifties and sixties, mysteriously dropped out of the New York jazz scène in the late sixties, when that whole musical arena seemed to be collapsing again. Since then, however, both Mingus and the Big Apple seem to be newly revitalized and in the swing again. l've seen Mingus twice in the last year, at the Ann Arbor Blues and Jazz Festival, and at King Pleasure about a month ago. Mingus has together one of the hardest blowing, sophisticated jazz units l've heard. His return to active musicianship has sparked the re-release of some fine old Mingus music. Atlantic Records, which recorded his work extensively in the late fifties and early sixties. and Impulse records, which picked up a few dates with Mingus and friends in 1963, have both issued doublé lp releases that provide valuable documentation of this many-sided, brilliant jazzman's career. Both lp's contain higlily enjoyable, easy to listen to tunes that can serve as excellent introductions to the world of Charles Mingus. They also effectively trace trace the development and changes in his style: from funky, good-time bop to sophisticated and hard swinging compositions that are al most symphonic in structure. The Atlantic sides, cut between 1956 and 1961, feature smaller-sized units, usually with several horns and brass instruments, and a rocking rhythm section. Some of the more outstanding soloists include the late Booker Ervin on tenor sax, the often humorous Jimmy Knepper on slide trombone, the colorful Rahsaan Roland Kirk on everything from flute and sax to siren and stritch, and Jackie McLean on alto sax.