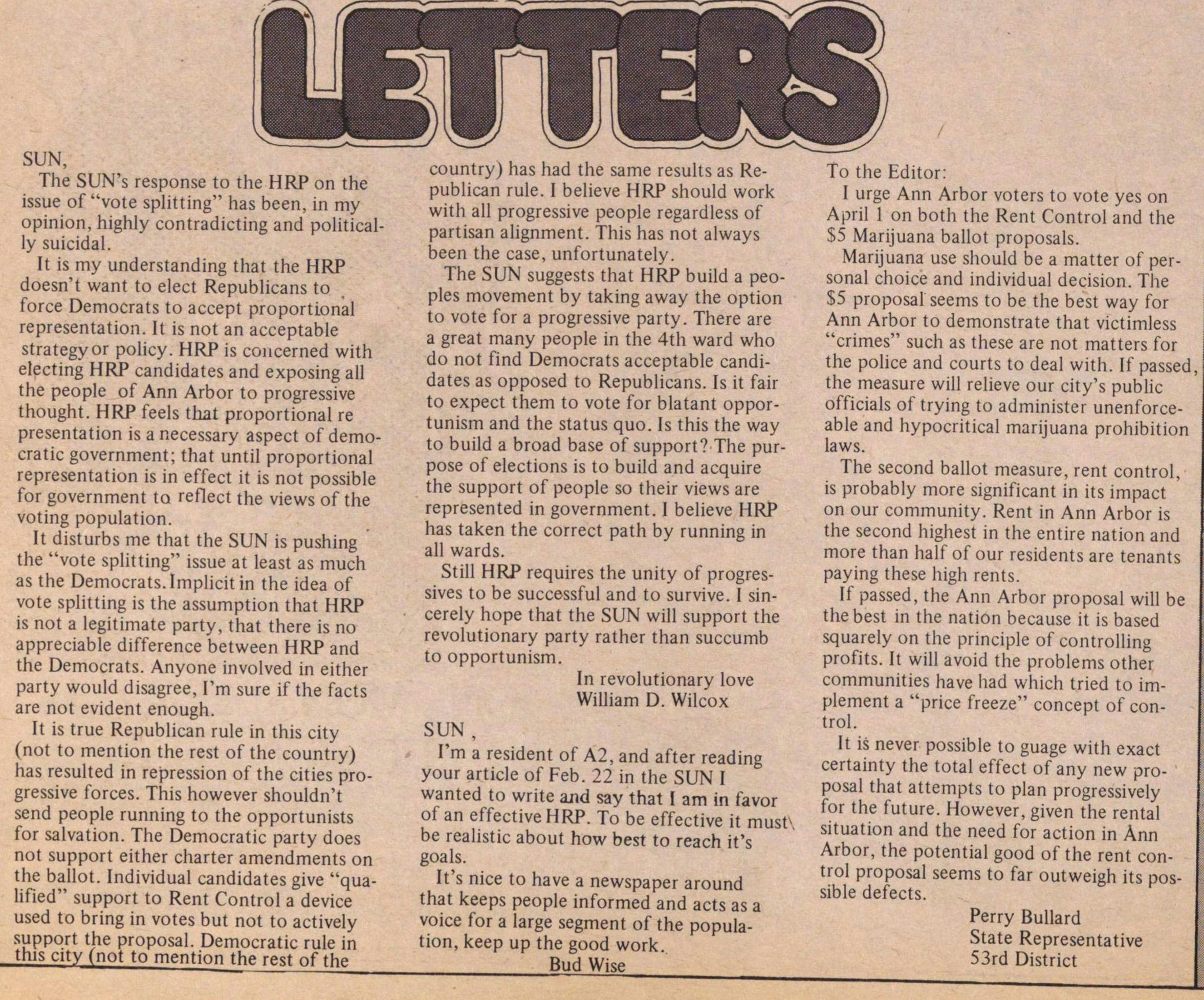 SUN, The SUN's response to the HRP on the issue of "vote splitting" has been, in my opinión, highly contradicting and politically suicidal. It is my understanding that the HRP doesn't want to elect Republicans to force Democrats to accept proportional representation. It is not an acceptable strategyor policy. HRP is concerned with electing HRP candidates and exposing all the people of Ann Arbor to progressive thought. HRP feels that proportional re presentation is a necessary aspect of democratie government; that until proportional representation is in effect it is not possible for government to reflect the views of the voting population. It disturbs me that the SUN is pushing the "vote splitting" issue at least as much as the Democrats. Implicit in the idea of vote splitting is the assumption that HRP is not a legitímate party, that there is no appreciable difference between HRP and the Democrats. Anyone involved in either party would disagree, Tm sure if the facts are not evident enough. It is true Republican rule in this city (not to mention the rest of the country) has resulted in repression of the cities progressive forces. This however shouldn't send people running to the opportunists for salvation. The Democratie party does not support either charter amendments on the ballot. Individual candidates give "qualified" support to Rent Control a device used to bring in votes but not to actively support the proposal. Democratie rule in this city (not to mention the rest of the country) has had the same results as Republican rule. I believe HRP should work with all progressive people regardless of partisan alignment. This has not always been the case, unfortunately. The SUN suggests that HRP build a peoples movement by taking away the option to vote for a progressive party. There are a great many people in the 4th ward who do not find Democrats acceptable candidates as opposed to Republicans. Is it fair to expect them to vote for blatant opportunism and the status quo. Is this the way to build a broad base of support? The purpose of elections is to build and acquire the support of people so their views are represented in government. I believe HRP has taken the correct path by running in all wards. Still HRP requires the unity of progressives to be successful and to survive. 1 sincerely hope that the SUN will support the revolutionary party rather than succumb to opportunism. In revolutionary love William D. Wilcox SUN, I'm a resident of A2, and after reading your article of Feb. 22 in the SUN I wanted to write and say that I am in favor of an effectiveHRP. To be effective it must be realistic about how best to reach it's goals. It's nice to have a newspaper around that keeps people informed and acts as a voice for a large segment of the population, keep up the good work. Bud Wise To the Editor: I urge Ann Arbor voters to vote yes on April 1 on both the Rent Control and the 55 Marijuana ballot proposals. Marijuana use should be a matter of personal choice and individual decisión. The $5 proposal seems to be the best way for Ann Arbor to demónstrate that victimless "crimes" such as these are not matters for the pólice and courts to deal with. If passed, the measure will relieve our city's public officials of trying to administer unenforceable and hypocritical marijuana prohibition laws. The second ballot measure, rent control, is probably more significant in its impact on our community. Rent in Ann Arbor is the second highest in the entire nation and more than half of our residents are tenants paying these high rents. If passed, the Ann Arbor proposal will be the best in the nation because it is based squarely on the principie of controlling profits. It will avoid the problems other communities have had which tried to implement a "price freeze" concept of control. It is never possible to guage with exact certainty the total effect of any new proposal that attempts to plan progressively for the future. However, given the rental situation and the need for action in Ann Arbor, the potential good of the rent control proposal seems to far outweigh its possible defects. State Representative 53rd District