An Interview With Phil Ochs Singin' The State Of Nixon & Nation 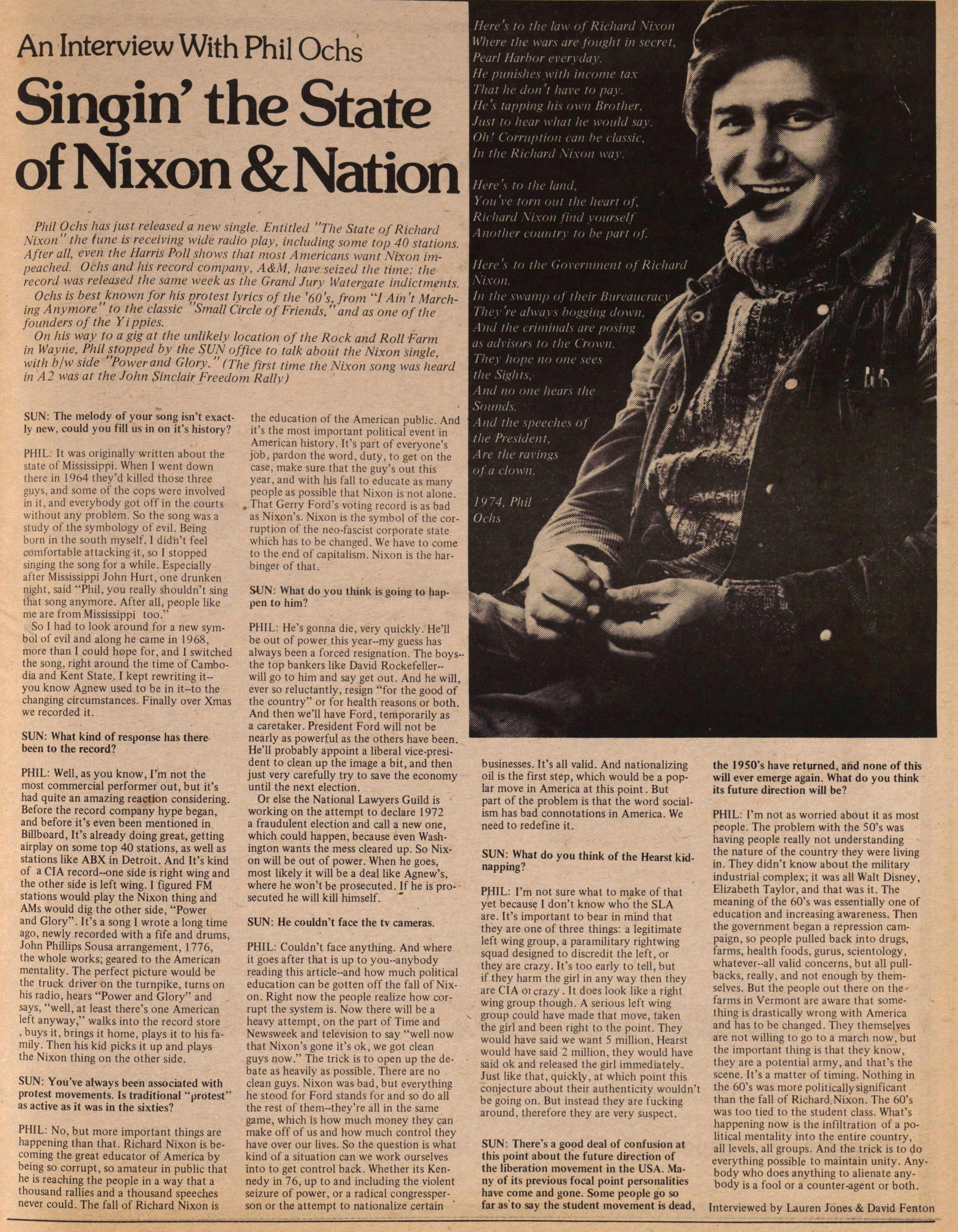 An Interview With Phil Ochs

Singin' the State of Nixon & Nation

Phil Ochs has just released a new single. Entitled "The State of Richard Nixon " the tune is receiving wide radio play, including some top 40 stations. After all, even the Harris Poll shows that most Americans want Nixon impeached. Ochs and his record company, A&M, have seized the time: the record was released the same week as the Grand Jury Watergate indictments.

Ochs is best known for his protest lyrics of the '60's, from "I Ain't Marching Anymore" to the classic "Small Circle of Friends," and as one of the founders of the Yippies.

On his way to a gig at the unlikely location of the Rock and Roll Farm in Wayne, Phil stopped by the SUN office to talk about the Nixon single, with b/w side "Power and Glory. " (The first time the Nixon song was heard in A2 was at the John Sinclair Freedom Rally)

SUN: The melody of your song isn't exactly new, could you fill us in on it's history?

PHIL: It was originally written about the state of Mississippi. When I went down there in 1964 they'd killed those three guys, and some of the cops were involved in it, and everybody got off in the courts without any problem. So the song was a study of the symbology of evil. Being born in the south myself, I didn't feel comfortable attacking it, so I stopped singing the song for a while. Especially after Mississippi John Hurt, one drunken night, said "Phil, you really shouldn't sing that song anymore. After all, people like me are from Mississippi too."

So I had to look around for a new symbol of evil and along he came in 1968, more than I could hope for, and I switched the song, right around the time of Cambodia and Kent State. I kept rewriting it-- you know Agnew used to be in it--to the changing circumstances. Finally over Xmas we recorded it.

SUN: What kind of response has there been to the record?

PHIL: Well, as you know, I'm not the most commercial performer out, but it's had quite an amazing reaction considering. Before the record company hype began, and before it's even been mentioned in Billboard, It's already doing great, getting airplay on some top 40 stations, as well as stations like ABX in Detroit. And It's kind of a CIA record--one side is right wing and the other side is left wing. I figured FM stations would play the Nixon thing and AMs would dig the other side, "Power and Glory". It's a song I wrote a long time ago, newly recorded with a fife and drums, John Phillips Sousa arrangement, 1776, the whole works; geared to the American mentality. The perfect picture would be the truck driver on the turnpike, turns on his radio, hears "Power and Glory" and says, "well, at least there's one American left anyway," walks into the record store, buys it, brings it home, plays it to his family. Then his kid picks it up and plays the Nixon thing on the other side.

SUN: You've always been associated with protest movements. Is traditional "protest" as active as it was in the sixties?

PHIL: No, but more important things are happening than that. Richard Nixon is becoming the great educator of America by being so corrupt, so amateur in public that he is reaching the people in a way that a thousand rallies and a thousand speeches never could. The fall of Richard Nixon is the education of the American public. And it's the most important political event in American history. It's part of everyone's job, pardon the word, duty, to get on the case, make sure that the guy's out this year, and with his fall to educate as many people as possible that Nixon is not alone. . That Gerry Ford's voting record is as bad as Nixon's. Nixon is the symbol of the corruption of the neo-fascist corporate state which has to be changed. We have to come to the end of capitalism. Nixon is the harbinger of that.

SUN: What do you think is going to happen to him?

PHIL: He's gonna die, very quickly. He'll be out of power this year-my guess has always been a forced resignation. The boys--the top bankers like David Rockefeller--will go to him and say get out. And he will, ever so reluctantly, resign "for the good of the country" or for health reasons or both. And then we'll have Ford, temporarily as a caretaker. President Ford will not be nearly as powerful as the others have been. He'll probably appoint a liberal vice-president to clean up the image a bit, and then just very carefully try to save the economy until the next election.

Or else the National Lawyers Guild is working on the attempt to declare 1972 a fraudulent election and call a new one, which could happen, because even Washington wants the mess cleared up. So Nixon will be out of power. When he goes, most likely it will be a deal like Agnew's, where he won't be prosecuted. If he is prosecuted he will kill himself.

PHIL: Couldn't face anything. And where it goes after that is up to you--anybody reading this article--and how much political education can be gotten off the fall of Nixon. Right now the people realize how corrupt the system is. Now there will be a heavy attempt, on the part of Time and Newsweek and television to say "well now that Nixon's gone it's ok, we got clean guys now." The trick is to open up the debate as heavily as possible. There are no clean guys. Nixon was bad, but everything he stood for Ford stands for and so do all the rest of them--they're all in the same game, which is how much money they can make off of us and how much control they have over our lives. So the question is what kind of a situation can we work ourselves into to get control back. Whether its Kennedy in 76, up to and including the violent seizure of power, or a radical congressperson or the attempt to nationalize certain businesses. It's all valid. And nationalizing oil is the first step, which would be a poplar move in America at this point . But part of the problem is that the word socialism has bad connotations in America. We need to redefine it.

SUN: What do you think of the Hearst kidnapping?

PHIL: I'm not sure what to make of that yet because I don't know who the SLA are. It's important to bear in mind that they are one of three things: a legitimate left wing group, a paramilitary right wing squad designed to discredit the left, or they are crazy. It's too early to tell, but if they harm the girl in any way then they are CIA or crazy. It does look like a right wing group though. A serious left wing group could have made that move, taken the girl and been right to the point. They would have said we want 5 million, Hearst would have said 2 million, they would have said ok and released the girl immediately. Just like that, quickly, at which point this conjecture about their authenticity wouldn't be going on. But instead they are fucking around, therefore they are very suspect.

SUN: There's a good deal of confusion at this point about the future direction of the liberation movement in the USA. Many of its previous focal point personalities have come and gone. Some people go so far as to say the student movement is dead, the 1950's have returned, and none of this will ever emerge again. What do you think its future direction will be?

PHIL: I'm not as worried about it as most people. The problem with the 50's was having people really not understanding the nature of the country they were living in. They didn't know about the military industrial complex; it was all Walt Disney, Elizabeth Taylor, and that was it. The meaning of the 60's was essentially one of education and increasing awareness. Then the government began a repression campaign, so people pulled back into drugs, farms, health foods, gurus, scientology, whatever-all valid concerns, but all pullbacks, really, and not enough by themselves. But the people out there on the farms in Vermont are aware that something is drastically wrong with America and has to be changed. They themselves are not willing to go to a march now, but the important thing is that they know, they are a potential army, and that's the scene. It's a matter of timing. Nothing in the 60's was more politically significant than the fall of Richard. Nixon. The 60's was too tied to the student class. What's happening now is the infiltration of a political mentality into the entire country, all levels, all groups. And the trick is to do everything possible to maintain unity. Anybody who does anything to alienate anybody is a fool or a counter-agent or both.