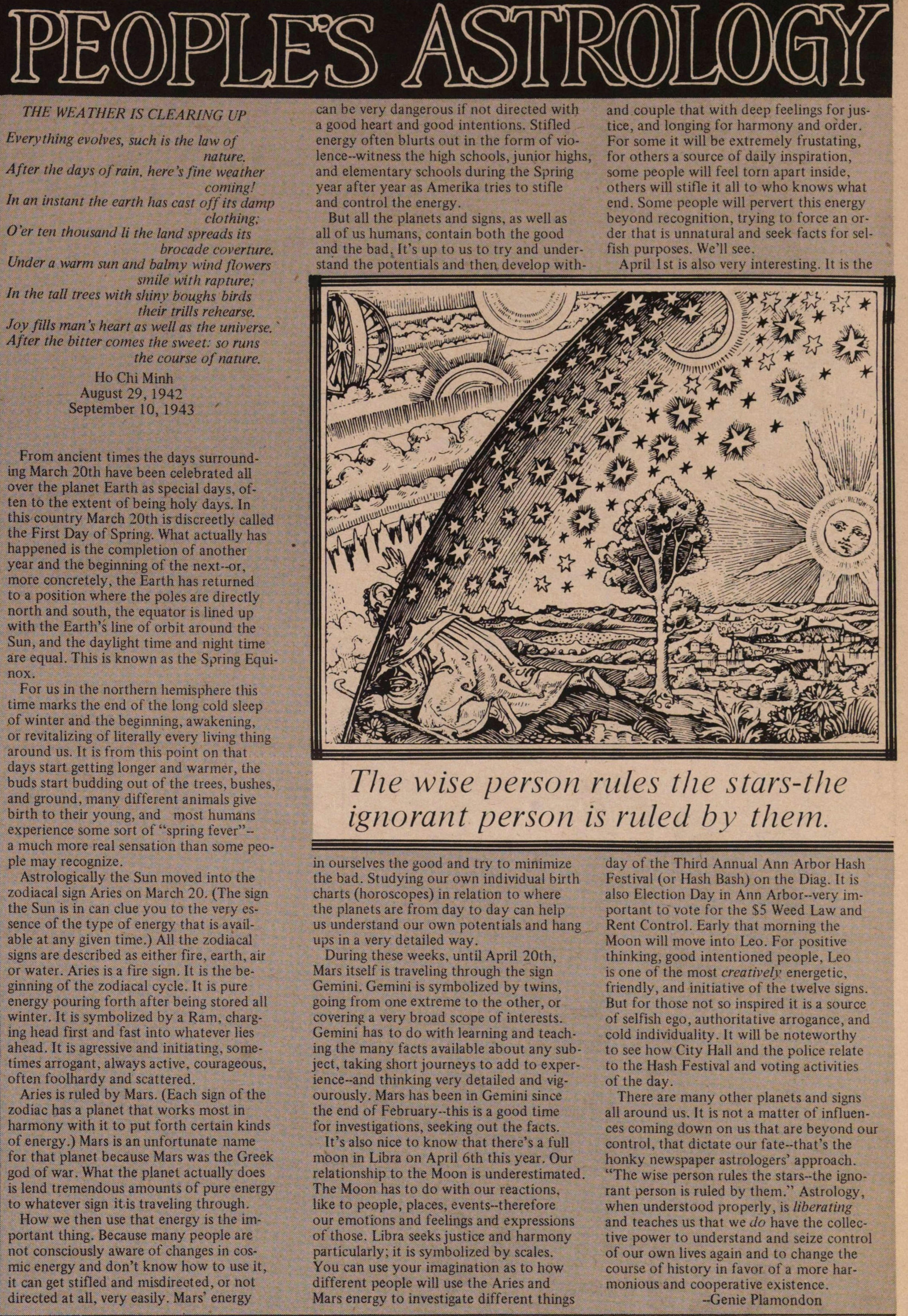 THE WEATHER IS CLEARING UP

Everything evolves, such is the law of nature.

After the days of rain, here's fine weather coming!

In an instant the earth has cast off its damp clothing;

Under a warm sun and balmy wind flowers smile with rapture;

In the tall trees with shiny boughs birds their trills rehearse.

Joy fills man's heart as well as the universe.

After the bitter comes the sweet: so runs the course of nature.

From ancient times the days surrounding March 20th have been celebrated all over the planet Earth as special days, often to the extent of being holy days. In this country March 20th is discreetly called the First Day of Spring. What actually has happened is the completion of another year and the beginning of the next - or, more concretely, the Earth has returned to a position where the poles are directly north and south, the equator is lined up with the Earth's line of orbit around the Sun, and the daylight time and night time are equal. This is known as the Spring Equinox.

For us in the northern hemisphere this time marks the end of the long cold sleep of winter and the beginning, awakening, or revitalizing of literally every living thing around us. It is from this point on that days start getting longer and warmer, the buds start budding out of the trees, bushes, and ground, many different animals give birth to their young, and most humans experience some sort of "spring fever" a much more real sensation than some people may recognize.

Astrologically the Sun moved into the zodiacal sign Aries on March 20. (The sign the Sun is in can clue you to the very essence of the type of energy that is available at any given time.) All the zodiacal signs are described as either fire, earth, air or water. Aries is a fire sign. It is the beginning of the zodiacal cycle. It is pure energy pouring forth after being stored all winter. It is symbolized by a Ram, charging head first and fast into whatever lies ahead. It is aggressive and initiating, sometimes arrogant, always active, courageous, often foolhardy and scattered.

Aries is ruled by Mars. (Each sign of the zodiac has a planet that works most in harmony with it to put forth certain kinds of energy.) Mars is an unfortunate name for that planet because Mars was the Greek god of war. What the planet actually does is lend tremendous amounts of pure energy to whatever sign it is traveling through.

How we then use that energy is the important thing. Because many people are not consciously aware of changes in cosmic energy and don't know how to use it, it can get stifled and misdirected, or not directed at all, very easily. Mars' energy can be very dangerous if not directed with a good heart and good intentions. Stifled energy often blurts out in the form of violence-witness the high schools, junior highs, and elementary schools during the Spring year after year as Amerika tries to stifle and control the energy.

But all the planets and signs, as well as all of us humans, contain both the good and the bad. It's up to us to try and understand the potentials and then develop in ourselves the good and try to minimize the bad. Studying our own individual birth charts (horoscopes) in relation to where the planets are from day to day can help us understand our own potentials and hang ups in a very detailed way.

During these weeks, until April 20th, Mars itself is traveling through the sign Gemini. Gemini is symbolized by twins, going from one extreme to the other, or covering a very broad scope of interests. Gemini has to do with learning and teaching the many facts available about any subject, taking short journeys to add to experience-and thinking very detailed and vigorously. Mars has been in Gemini since the end of February-this is a good time for investigations, seeking out the facts.

It's also nice to know that there's a full moon in Libra on April 6th this year. Our relationship to the Moon is underestimated. The Moon has to do with our reactions. like to people, places, events-therefore our emotions and feelings and expressions of those. Libra seeks justice and harmony particularly; it is symbolized by scales. You can use your imagination as to how different people will use the Aries and Mars energy to investigate different things and couple that with deep feelings for justice, and longing for harmony and order. For some it will be extremely frustrating, for others a source of daily inspiration, some people will feel torn apart inside, others will stifle it all to who knows what end. Some people will pervert this energy beyond recognition, trying to force an order that is unnatural and seek facts for selfish purposes. We'll see.

April 1st is also very interesting. It is the day of the Third Annual Ann Arbor Hash Festival (or Hash Bash) on the Diag. It is also Election Day in Ann Arbor--very important to vote for the $5 Weed Law and Rent Control. Early that morning the Moon will move into Leo. For positive thinking, good intentioned people, Leo is one of the most creatively energetic, friendly, and initiative of the twelve signs. But for those not so inspired it is a source of selfish ego, authoritative arrogance, and cold individuality. It will be noteworthy to see how City Hall and the police relate to the Hash Festival and voting activities of the day.