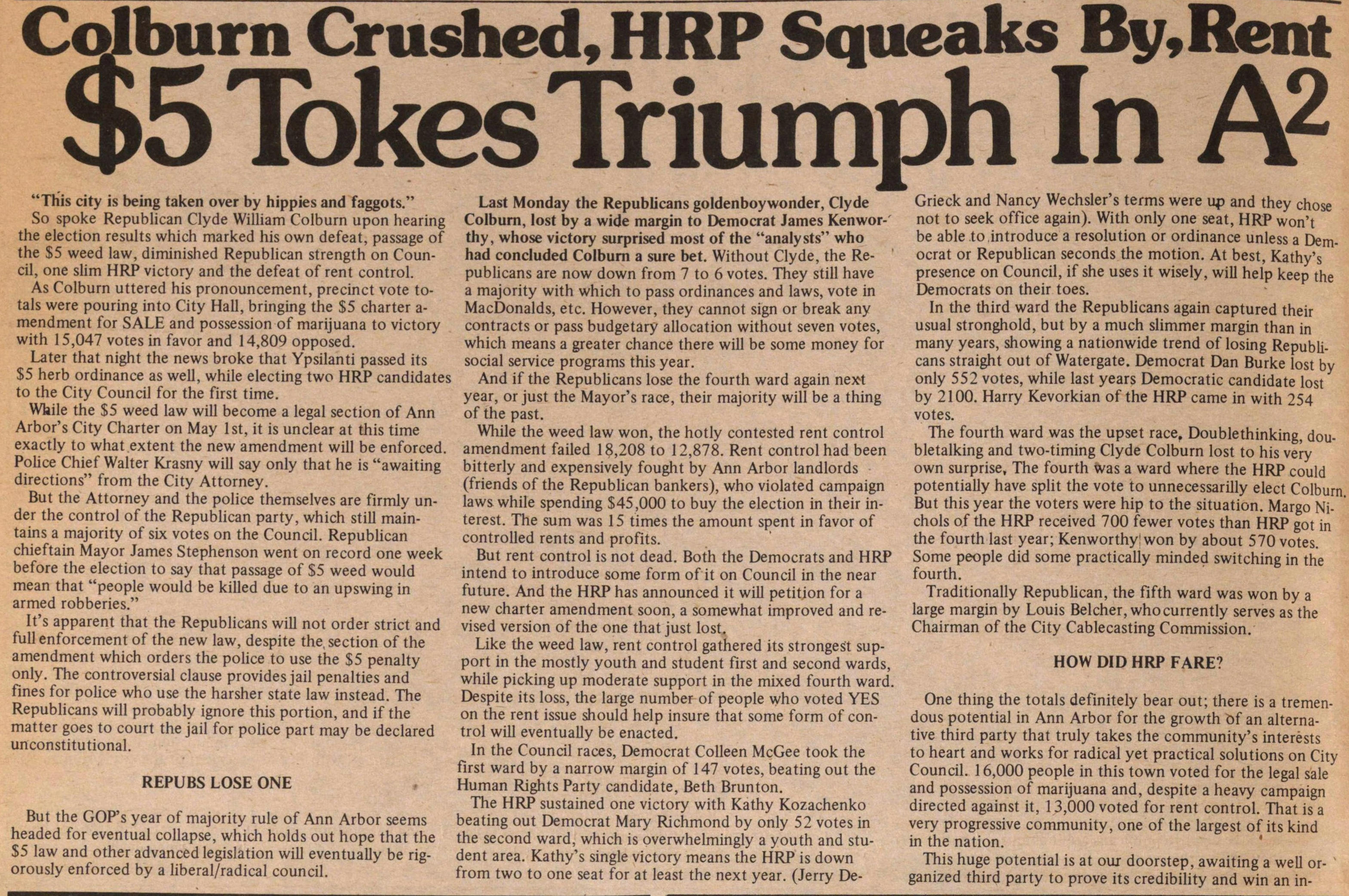 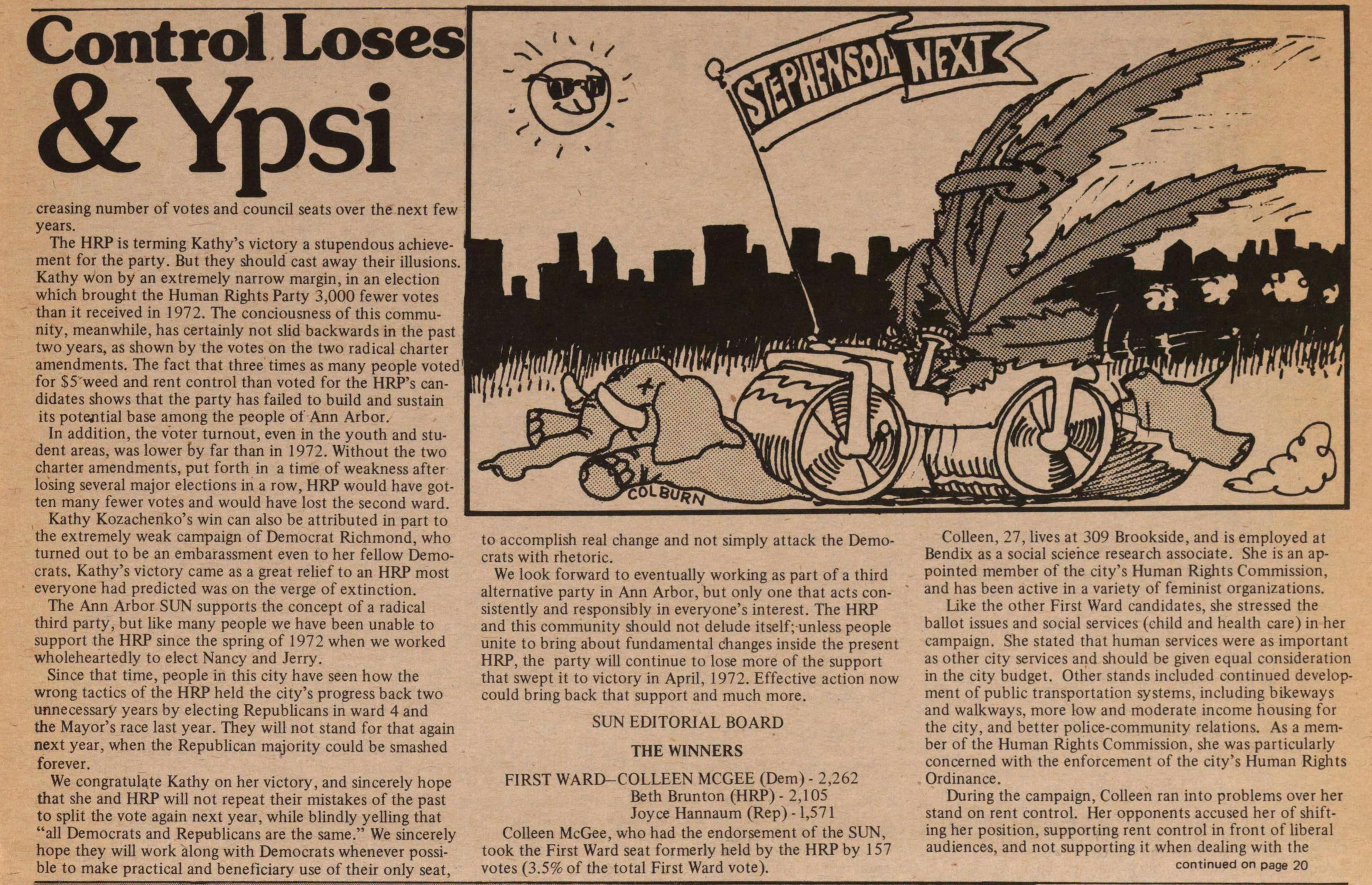 "This city is being taken over by hippies and faggots."

So spoke Republican Clyde William Colburn upon hearing the election results which marked his own defeat, passage of the $5 weed law, diminished Republican strength on Council, one slim HRP victory and the defeat of rent control.

As Colburn uttered his pronouncement, precinct vote totals were pouring into City Hall, bringing the $5 charter amendment for SALE and possession of marijuana to victory with 15,047 votes in favor and 14,809 opposed.

Later that night the news broke that Ypsilanti passed its $5 herb ordinance as well, while electing two HRP candidates to the City Council for the first time.

While the $5 weed law will become a legal section of Ann Arbor's City Charter on May 1st, it is unclear at this time exactly to what extent the new amendment will be enforced. Police Chief Walter Krasny will say only that he is "awaiting directions" from the City Attorney.

But the Attorney and the police themselves are firmly under the control of the Republican party, which still maintains a majority of six votes on the Council. Republican chieftain Mayor James Stephenson went on record one week before the election to say that passage of $5 weed would mean that "people would be killed due to an upswing in armed robberies."

It's apparent that the Republicans will not order strict and full enforcement of the new law, despite the section of the amendment which orders the police to use the $5 penalty only. The controversial clause provides jail penalties and fines for police who use the harsher state law instead. The Republicans will probably ignore this portion, and if the matter goes to court the jail for police part may be declared unconstitutional.

But the GOP's year of majority rule of Ann Arbor seems headed for eventual collapse, which holds out hope that the $5 law and other advanced legislation will eventually be rigorously enforced by a liberal/radical council.

Last Monday the Republicans goldenboywonder, Clyde Colburn, lost by a wide margin to Democrat James Kenworthy, whose victory surprised most of the "analysts" who had concluded Colburn a sure bet. Without Clyde, the Republicans are now down from 7 to 6 votes. They still have a majority with which to pass ordinances and laws, vote in MacDonalds, etc. However, they cannot sign or break any contracts or pass budgetary allocation without seven votes, which means a greater chance there will be some money for social service programs this year.

And if the Republicans lose the fourth ward again next year, or just the Mayor's race, their majority will be a thing of the past.

While the weed law won, the hotly contested rent control amendment failed 18,208 to 12,878. Rent control had been bitterly and expensively fought by Ann Arbor landlords (friends of the Republican bankers), who violated campaign laws while spending $45,000 to buy the election in their interest. The sum was 15 times the amount spent in favor of controlled rents and profits.

But rent control is not dead. Both the Democrats and HRP intend to introduce some form of it on Council in the near future. And the HRP has announced it will petition for a new charter amendment soon, a somewhat improved and revised version of the one that just lost.

Like the weed law, rent control gathered its strongest support in the mostly youth and student first and second wards, while picking up moderate support in the mixed fourth ward. Despite its loss, the large number of people who voted YES on the rent issue should help insure that some form of control will eventually be enacted.

In the Council races, Democrat Colleen McGee took the first ward by a narrow margin of 147 votes, beating out the Human Rights Party candidate, Beth Brunton.

The HRP sustained one victory with Kathy Kozachenko beating out Democrat Mary Richmond by only 52 votes in the second ward, which is overwhelmingly a youth and student area. Kathy's single victory means the HRP is down from two to one seat for at least the next year. (Jerry DeGrieck and Nancy Wechsler's terms were up and they chose not to seek office again). With only one seat, HRP won't be able to introduce a resolution or ordinance unless a Democrat or Republican seconds the motion. At best, Kathy's presence on Council, if she uses it wisely, will help keep the Democrats on their toes.

In the third ward the Republicans again captured their usual stronghold, but by a much slimmer margin than in many years, showing a nationwide trend of losing Republicans straight out of Watergate. Democrat Dan Burke lost by only 552 votes, while last years Democratic candidate lost by 2100. Harry Kevorkian of the HRP came in with 254 votes.

The fourth ward was the upset race, Doublethinking, doubletalking and two-timing Clyde Colburn lost to his very own surprise. The fourth was a ward where the HRP could potentially have split the vote to unnecessarilly elect Colburn. But this year the voters were hip to the situation. Margo Nichols of the HRP received 700 fewer votes than HRP got in the fourth last year; Kenworthy: won by about 570 votes. Some people did some practically minded switching in the fourth.

Traditionally Republican, the fifth ward was won by a large margin by Louis Belcher, who currently serves as the Chairman of the City Cablecasting Commission.

HOW DID HRP FARE?

One thing the totals definitely bear out; there is a tremendous potential in Ann Arbor for the growth of an alternative third party that truly takes the community's interests to heart and works for radical yet practical solutions on City Council. 16,000 people in this town voted for the legal sale and possession of marijuana and, despite a heavy campaign directed against it, 13,000 voted for rent control. That is a very progressive community, one of the largest of its kind in the nation.

This huge potential is at our doorstep, awaiting a well organized third party to prove its credibility and win an creasing number of votes and council seats over the next few years.

The HRP is terming Kathy's victory a stupendous achievement for the party. But they should cast away their illusions. Kathy won by an extremely narrow margin, in an election which brought the Human Rights Party 3,000 fewer votes than it received in 1972. The conciousness of this community, meanwhile, has certainly not slid backwards in the past two years, as shown by the votes on the two radical charter amendments. The fact that three times as many people voted for $5 weed and rent control than voted for the HRP's candidates shows that the party has failed to build and sustain its potential base among the people of Ann Arbor.

In addition, the voter turnout, even in the youth and student areas, was lower by far than in 1972. Without the two charter amendments, put forth in a time of weakness after losing several major elections in a row, HRP would have gotten many fewer votes and would have lost the second ward.

Kathy Kozachenko's win can also be attributed in part to the extremely weak campaign of Democrat Richmond, who turned out to be an embarrassment even to her fellow Democrats. Kathy's victory carne as a great relief to an HRP most everyone had predicted was on the verge of extinction.

The Ann Arbor SUN supports the concept of a radical third party, but like many people we have been unable to support the HRP since the spring of 1972 when we worked wholeheartedly to elect Nancy and Jerry.

Since that time, people in this city have seen how the wrong tactics of the HRP held the city's progress back two unnecessary years by electing Republicans in ward 4 and the Mayor's race last year. They will not stand for that again next year, when the Republican majority could be smashed forever.

We congratulate Kathy on her victory, and sincerely hope that she and HRP will not repeat their mistakes of the past to split the vote again next year, while blindly yelling that "all Democrats and Republicans are the same." We sincerely hope they will work along with Democrats whenever possible to make practical and beneficiary use of their only seat, to accomplish real change and not simply attack the Democrats with rhetoric.

We look forward to eventually working as part of a third alternative party in Ann Arbor, but only one that acts consistently and responsibly in everyone's interest. The HRP and this community should not delude itself; unless people unite to bring about fundamental changes inside the present HRP, the party will continue to lose more of the support that swept it to victory in April, 1972. Effective action now could bring back that support and much more.

Colleen McGee, who had the endorsement of the SUN, took the First Ward seat formerly held by the HRP by 157 votes (3.5% of the total First Ward vote). Colleen, 27, lives at 309 Brookside, and is employed at Bendix as a social science research associate. She is an appointed member of the city's Human Rights Commission, and has been active in a variety of feminist organizations.

Like the other First Ward candidates, she stressed the ballot issues and social services (child and health care) in her campaign. She stated that human services were as important as other city services and should be given equal consideration in the city budget. Other stands included continued development of public transportation systems, including bikeways and walkways, more low and moderate income housing for the city, and better police-community relations. As a member of the Human Rights Commission, she was particularly concerned with the enforcement of the city's Human Rights Ordinance.

During the campaign, Colleen ran into problems over her stand on rent control. Her opponents accused her of shifting her position, supporting rent control in front of liberal audiences, and not supporting it when dealing with the continued on page 20