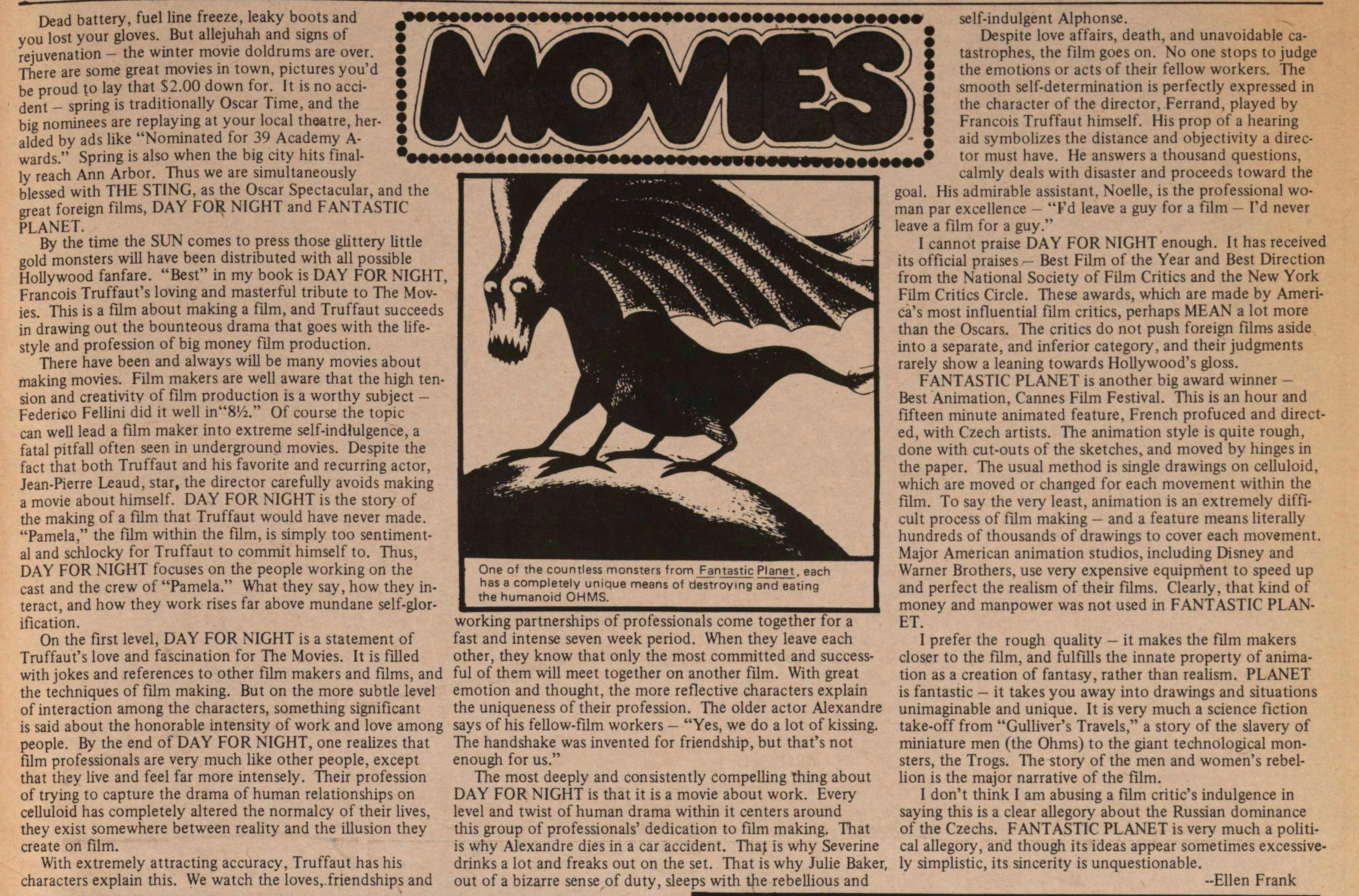 Dead battery, fuel line freeze, leaky boots and you lost your gloves. But allejuhah and signs of rejuvenation – the winter movie doldrums are over. There are some great movies in town, pictures you’d be proud to lay that $2.00 down for. It is no accident – spring is traditionally Oscar Time, and the big nominees are replaying at your local theatre, heralded by ads like “Nominated for 39 Academy Awards.” Spring is also when the big city hits finally reach Ann Arbor. Thus we are simultaneously blessed with THE STING, as the Oscar Spectacular, and the great foreign films, DAY FOR NIGHT and FANTASTIC PLANET.

By the time the SUN comes to press those glittery little gold monsters will have been distributed with all possible Hollywood fanfare. “Best” in my book is DAY FOR NIGHT, Francois Truffaut’s loving and masterful tribute to The Movies. This is a film about making a film, and Truffaut succeeds in drawing out the bounteous drama that goes with the lifestyle and profession of big money film production.

There have been and always will be many movies about making movies. Film makers are well aware that the high tension and creativity of film production is a worthy subject – Federico Fellini did it well in “8½.” Of course, the topic can well lead a film maker into extreme self-indulgence, a fatal pitfall often seen in underground movies. Despite the fact that both Truffaut and his favorite and recurring actor, Jean-Pierre Leaud, star, the director carefully avoids making a movie about himself. DAY FOR NIGHT is the story of the making of a film that Truffaut would have never made. “Pamela,” the film within the film, is simply too sentimental and schlocky for Truffaut to commit himself to. Thus, DAY FOR NIGHT focuses on the people working on the cast and the crew of “Pamela.” What they say, how they interact, and how they work rises far above mundane self-glorification.

On the first level, DAY FOR NIGHT is a statement of Truffaut’s love and fascination for The Movies. It is filled with jokes and references to other film makers and films, and the techniques of film making. But on the more subtle level of interaction among the characters, something significant is said about the honorable intensity of work and love among people. By the end of DAY FOR NIGHT, one realizes that film professionals are very much like other people, except that they live and feel far more intensely. Their profession of trying to capture the drama of human relationships on celluloid has completely altered the normalcy of their lives, they exist somewhere between reality and the illusion they create on film.

With extremely attracting accuracy, Truffaut has his characters explain this. We watch the loves, friendships and working partnerships of professionals come together for a fast and intense seven week period. When they leave each other, they know that only the most committed and successful of them will meet together on another film. With great emotion and thought, the more reflective characters explain the uniqueness of their profession. The older actor Alexandre says of his fellow-film workers – “Yes, we do a lot of kissing. The handshake was invented for friendship, but that’s not enough for us.”

The most deeply and consistently compelling thing about DAY FOR NIGHT is that it is a movie about work. Every level and twist of human drama within it centers around this group of professionals’ dedication to film making. That is why Alexandre dies in a car accident. That is why Severine drinks a lot and freaks out on the set. That is why Julie Baker, out of a bizarre sense of duty, sleeps with the rebellious and self-indulgent Alphonse.

Despite love affairs, death, and unavoidable catastrophes, the film goes on. No one stops to judge the emotions or acts of their fellow workers. The smooth self-determination is perfectly expressed in the character of the director, Ferrand, played by Francois Truffaut himself. His prop of a hearing aid symbolizes the distance and objectivity a director must have. He answers a thousand questions, calmly deals with disaster and proceeds toward the goal. His admirable assistant, Noelle, is the professional woman par excellence – “I’d leave a guy for a film – I’d never leave a film for a guy.”

I cannot praise DAY FOR NIGHT enough. It has received its official praises – Best Film of the Year and Best Direction from the National Society of Film Critics and the New York Film Critics Circle. These awards, which are made by America’s most influential film critics, perhaps MEAN a lot more than the Oscars. The critics do not push foreign films aside into a separate, and inferior category, and their judgments rarely show a leaning towards Hollywood’s gloss.

FANTASTIC PLANET is another big award winner – Best Animation, Cannes Film Festival. This is an hour and fifteen minute animated feature, French produced and directed, with Czech artists. The animation style is quite rough, done with cut-outs of the sketches, and moved by hinges in the paper. The usual method is single drawings on celluloid, which are moved or changed for each movement within the film. To say the very least, animation is an extremely difficult process of film making – and a feature means literally hundreds of thousands of drawings to cover each movement. Major American animation studios, including Disney and Warner Brothers, use very expensive equipment to speed up and perfect the realism of their films. Clearly, that kind of money and manpower was not used in FANTASTIC PLANET.

I prefer the rough quality – it makes the film makers closer to the film, and fulfills the innate property of animation as a creation of fantasy, rather than realism. PLANET is fantastic – it takes you away into drawings and situations unimaginable and unique. It is very much a science fiction take-off from “Gulliver’s Travels,” a story of the slavery of miniature men (the Ohms) to the giant technological monsters, the Trogs. The story of the men and women’s rebellion is the major narrative of the film.

I don’t think I am abusing a film critic’s indulgence in saying this is a clear allegory about the Russian dominance of the Czechs. FANTASTIC PLANET is very much a political allegory, and though its ideas appear sometimes excessively simplistic, its sincerity is unquestionable.