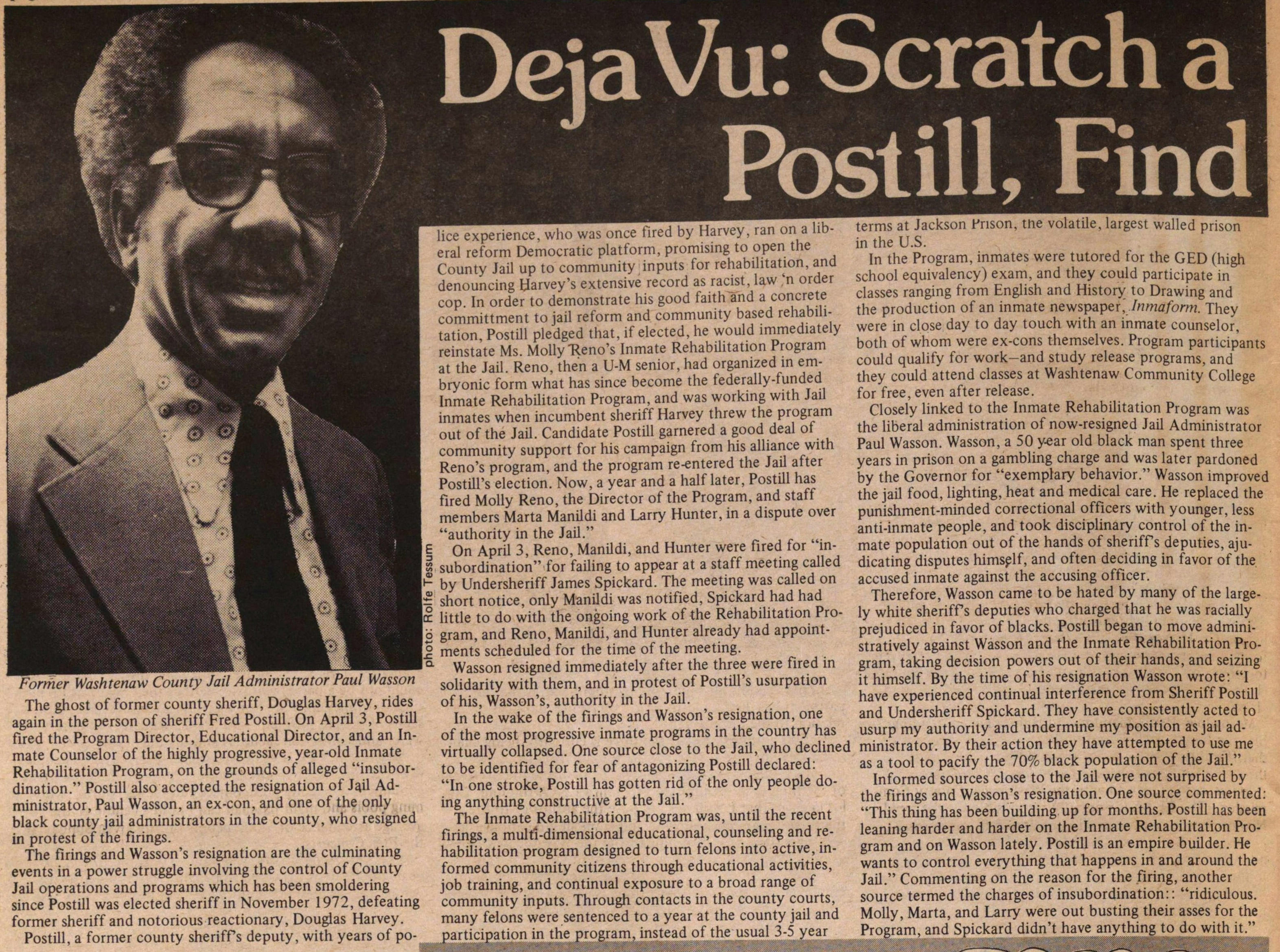 The ghost of former county sheriff, Douglas Harvey, rides again in the person of sheriff Fred Postill. On April 3, Postill fired the Program Director, Educational Director, and an Inmate Counselor of the highly progressive, year-old Inmate Rehabilitation Program, on the grounds of alleged “insubordination.” Postill also accepted the resignation of Jail Administrator, Paul Wasson, an ex-con, and one of the only black county jail administrators in the county, who resigned in protest of the firings.

The firings and Wasson’s resignation are the culminating events in a power struggle involving the control of County Jail operations and programs which has been smoldering since Postill was elected sheriff in November 1972, defeating former sheriff and notorious reactionary, Douglas Harvey.

Postill, a former county sheriff’s deputy, with years of police experience, who was once fired by Harvey, ran on a liberal reform Democratic platform, promising to open the County Jail up to community inputs for rehabilitation, and denouncing Harvey’s extensive record as racist, law and order cop. In order to demonstrate his good faith and a concrete commitment to jail reform and community-based rehabilitation, Postill pledged that, if elected, he would immediately reinstate Ms. Molly Reno’s Inmate Rehabilitation Program at the Jail. Reno, then a U-M senior, had organized in embryonic form what has since become the federally-funded Inmate Rehabilitation Program, and was working with Jail inmates when incumbent sheriff Harvey threw the program out of the Jail. Candidate Postill garnered a good deal of community support for his campaign from his alliance with Reno’s program, and the program re-entered the Jail after Postill’s election. Now, a year and a half later, Postill has fired Molly Reno, the Director of the Program, and staff members Marta Manildi and Larry Hunter, in a dispute over “authority in the Jail.”

On April 3, Reno, Manildi, and Hunter were fired for “insubordination” for failing to appear at a staff meeting called by Undersheriff James Spickard. The meeting was called on short notice, only Manildi was notified, Spickard had had little to do with the ongoing work of the Rehabilitation Program, and Reno, Manildi, and Hunter already had appointments scheduled for the time of the meeting.

Wasson resigned immediately after the three were fired in solidarity with them, and in protest of Postill’s usurpation of his, Wasson’s, authority in the Jail.

In the wake of the firings and Wasson’s resignation, one of the most progressive inmate programs in the country has virtually collapsed. One source close to the Jail, who declined to be identified for fear of antagonizing Postill declared: “In one stroke, Postill has gotten rid of the only people doing anything constructive at the Jail.”

The Inmate Rehabilitation Program was, until the recent firings, a multi-dimensional educational, counseling and rehabilitation program designed to turn felons into active, informed community citizens through educational activities, job training, and continual exposure to a broad range of community inputs. Through contacts in the county courts, many felons were sentenced to a year at the county jail and participation in the program, instead of the usual 3-5 year terms at Jackson Prison, the volatile, largest walled prison in the U.S.

In the Program, inmates were tutored for the GED (high school equivalency) exam, and they could participate in classes ranging from English and History to Drawing and the production of an inmate newspaper, Inmaform. They were in close day to day touch with an inmate counselor, both of whom were ex-cons themselves. Program participants could qualify for work – and study release programs, and they could attend classes at Washtenaw Community College for free, even after release.

Closely linked to the Inmate Rehabilitation Program was the liberal administration of now-resigned Jail Administrator Paul Wasson. Wasson, a 50 year old black man spent three years in prison on a gambling charge and was later pardoned by the Governor for “exemplary behavior.” Wasson improved the jail food, lighting, heat and medical care. He replaced the punishment-minded correctional officers with younger, less anti-inmate people, and took disciplinary control of the inmate population out of the hands of sheriff’s deputies, adjudicating disputes himself, and often deciding in favor of the accused inmate against the accusing officer.

Therefore, Wasson came to be hated by many of the largely white sheriff’s deputies who charged that he was racially prejudiced in favor of blacks. Postill began to move administratively against Wasson and the Inmate Rehabilitation Program, taking decision powers out of their hands, and seizing it himself. By the time of his resignation Wasson wrote: “I have experienced continual interference from Sheriff Postill and Undersheriff Spickard. They have consistently acted to usurp my authority and undermine my position as jail administrator. By their action they have attempted to use me as a tool to pacify the 70% black population of the Jail.”

Informed sources close to the Jail were not surprised by the firings and Wasson’s resignation. One source commented: “This thing has been building up for months. Postill has been leaning harder and harder on the Inmate Rehabilitation Program and on Wasson lately. Postill is an empire builder. He wants to control everything that happens in and around the Jail.” Commenting on the reason for the firing, another source termed the charges of insubordination:: “ridiculous. Molly, Marta, and Larry were out busting their asses for the Program, and Spickard didn’t have anything to do with it.”

It might well be recalled that former sheriff Douglas Harvey, who ran against Postill in 1972 on the Wallace-oriented American Independent Party ticket, first became sheriff as a liberal reform Democrat, who, like Postill, swept into office promising to correct the well-publicized abuses and injustices rampant inside the County Jail. However, once Harvey became sheriff, he ran roughshod over Jail inmates’ civil rights, denying them due process, decent food, heat, light, and medical care, illegally censoring mail, and hiring his wife and son on the County payroll as “correctional officers.” Throughout the county Harvey made a policy of terrorizing the black, street, youth and student communities. He seemed to relish breaking activist heads, and his myopic law ‘n order practices were directly responsible for turning a raucous but peaceful street party into the South University Riots of 1969 where riot-equipped police from three counties sprayed young people with CS teargas, a weapon which is banned by the Geneva Conventions on the Conduct of War. It was also Harvey who, the following fall, beat up and arrested over 100 University students who staged a non-violent sit-in in the LSA Building around the issue of a student-controlled university bookstore, now the University Cellar.

The recent firings have led a number of people involved in the Jail scene to conclude that Postill has finally pulled off his mask of enlightenment, and has revealed himself to be another Harvey. “Postill’s always been a cop,” one informed source commented. “His act was a little better put together, but they’re (Postill and Harvey) cut from the same cloth.” Another source remarked: “Scratch a Postill; find a Harvey.”

Meanwhile, Reno, Manildi, and Hunter are contending that the Inmate Rehabilitation Program is independent of sheriff’s department control since it is federally funded through a contract from the Law Enforcement Assistance Administration (LEAA) with the Washtenaw County Commission. (The LEAA is primarily responsible for the rapid Nixon-sponsored militarization of domestic police forces, however, a small proportion of its funds support community rehabilitation demonstration projects.) In a statement to the County Commission, the three fired employees wrote: “We object to the reasons and manner in which we were terminated and furthermore we question the authority of the sheriff to legally fire us.”

Sheriff Postill’s position, on the other hand, is that his department has direct control over everything that goes on in relation to the County Jail.

Postill’s authority to fire the three is currently being challenged by left-liberal Democrat Elizabeth Taylor, whose County Commission subcommittee on grants is the overseer of the Inmate Rehabilitation Program’s LEAA funding. Taylor believes that Postill did not have the authority to fire the three Program employees, and from all indications, she will press for a definitive ruling from the Washtenaw County Commission, the ultimate authority in County affairs.

Whether or not the three Inmate Rehabilitation Program employees are reinstated, one thing is certain: Sheriff Postill seems to have shed all vestiges of his liberal election packaging, and has emerged as just another cop.