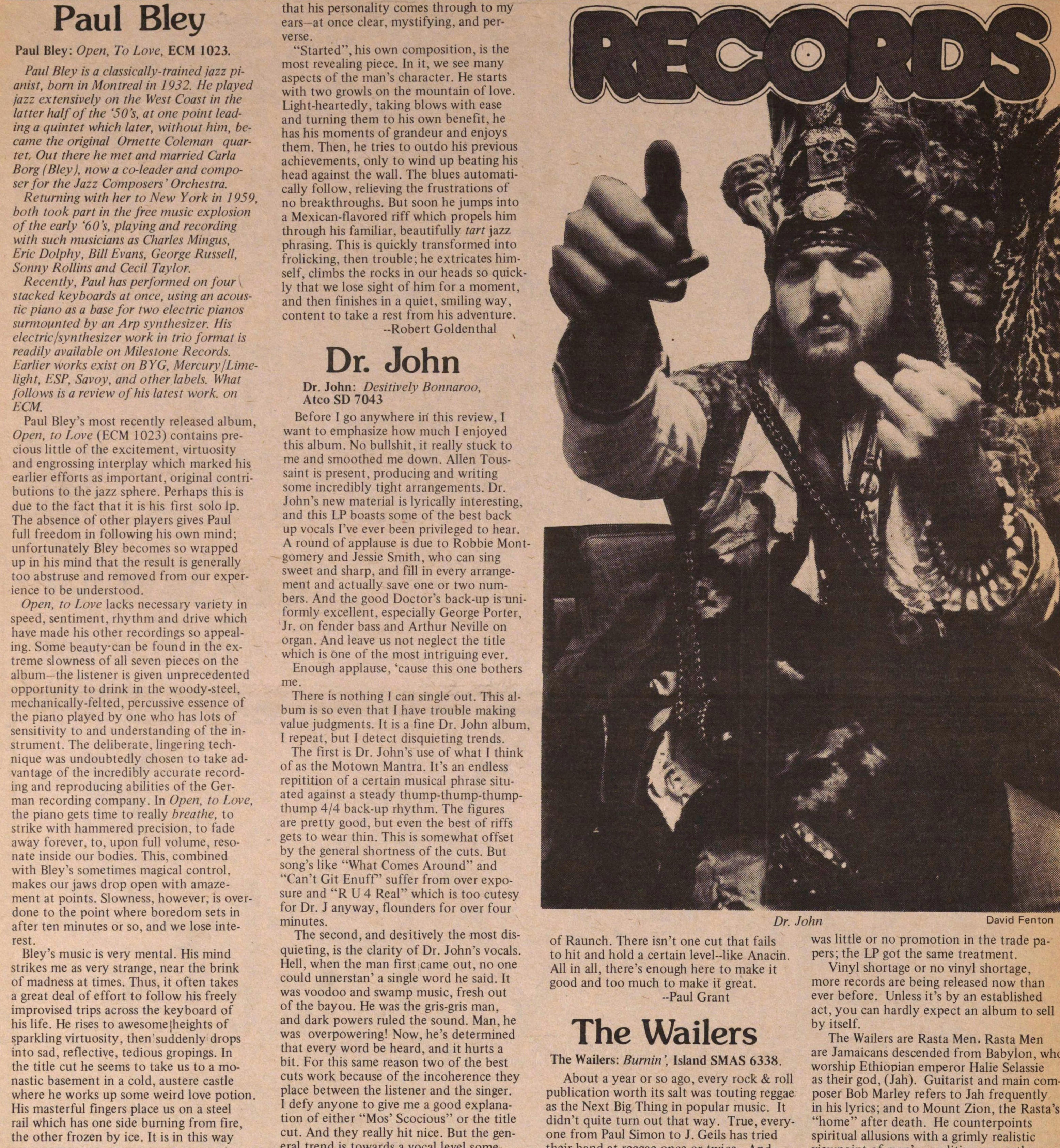 Paul Bley is a classically-trained jazz pianist, born in Montreal in 1932. He played jazz extensively on the West Coast in the latter half of the ‘50’s, at one point leading a quintet which later, without him, became the original Ornette Coleman quartet. Out there he met and married Carla Borg (Bley), now a co-leader and composer for the Jazz Composers’ Orchestra.

Returning with her to New York in 1959, both took part in the free music explosion of the early ‘60’s, playing and recording with such musicians as Charles Mingus, Eric Dolphy, Bill Evans, George Russell, Sonny Rollins and Cecil Taylor.

Recently, Paul has performed on four stacked keyboards at once, using an acoustic piano as a base for two electric pianos surmounted by an Arp synthesizer. His electric synthesizer work in trio format is readily available on Milestone Records. Earlier works exist on BYG, Mercury/Limelight, ESP, Savoy, and other labels. What follows is a review of his latest work. on ECM.

Paul Bley’s most recently released album, Open, to Love (ECM 1023) contains precious little of the excitement, virtuosity and engrossing interplay which marked his earlier efforts as important, original contributions to the jazz sphere. Perhaps this is due to the fact that it is his first solo LP. The absence of other players gives Paul full freedom in following his own mind; unfortunately Bley becomes so wrapped up in his mind that the result is generally too abstruse and removed from our experience to be understood.

Open, to Love lacks necessary variety in speed, sentiment, rhythm and drive which have made his other recordings so appealing. Some beauty can be found in the extreme slowness of all seven pieces on the album – the listener is given unprecedented opportunity to drink in the woody-steel, mechanically-felted, percussive essence of the piano played by one who has lots of sensitivity to and understanding of the instrument. The deliberate, lingering technique was undoubtedly chosen to take advantage of the incredibly accurate recording and reproducing abilities of the German recording company. In Open, to Love, the piano gets time to really breathe, to strike with hammered precision, to fade away forever, to, upon full volume, resonate inside our bodies. This, combined with Bley’s sometimes magical control, makes our jaws drop open with amazement at points. Slowness, however, is overdone to the point where boredom sets in after ten minutes or so, and we lose interest.

Bley’s music is very mental. His mind strikes me as very strange, near the brink of madness at times. Thus, it often takes a great deal of effort to follow his freely improvised trips across the keyboard of his life. He rises to awesome heights of sparkling virtuosity, then suddenly drops into sad, reflective, tedious gropings. In the title cut he seems to take us to a monastic basement in a cold, austere castle where he works up some weird love potion. His masterful fingers place us on a steel rail which has one side burning from fire, the other frozen by ice. It is in this way that his personality comes through to my ears – at once clear, mystifying, and perverse.

“Started”, his own composition, is the most revealing piece. In it, we see many aspects of the man ‘s character. He starts with two growls on the mountain of love. Light-heartedly, taking blows with ease and turning them to his own benefit, he has his moments of grandeur and enjoys them. Then, he tries to outdo his previous achievements, only to wind up beating his head against the wall. The blues automatically follow, relieving the frustrations of no breakthroughs. But soon he jumps into a Mexican-flavored riff which propels him through his familiar, beautifully tart jazz phrasing. This is quickly transformed into frolicking, then trouble; he extricates himself, climbs the rocks in our heads so quickly that we lose sight of him for a moment, and then finishes in a quiet, smiling way, content to take a rest from his adventure.