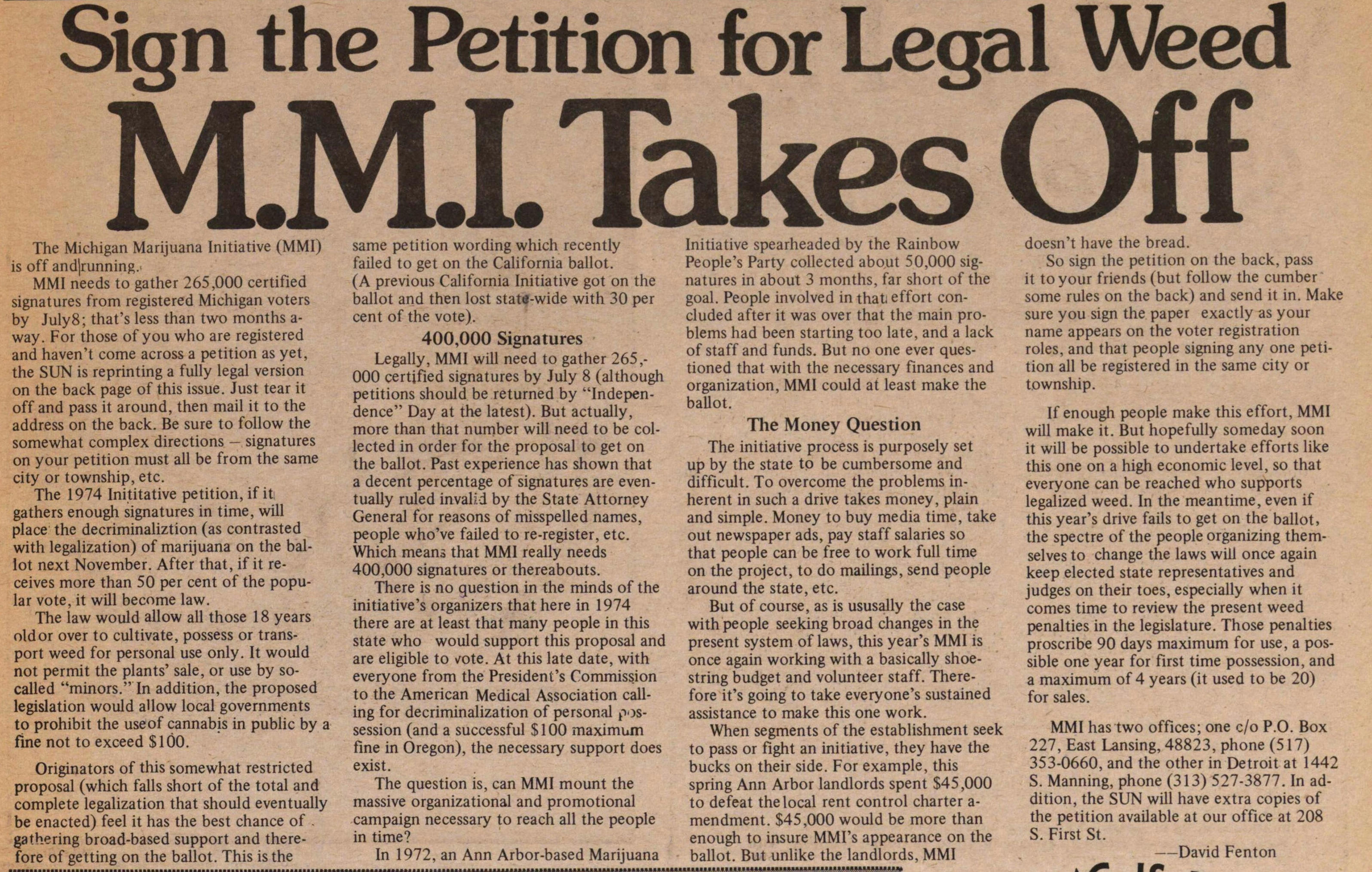 Sign the Petition for Legal Weed
M.M.I. Takes Off

The Michigan Marijuana Initiative (MMI) is off and running.

MMI needs to gather 265,000 certified signatures from registered Michigan voters by July8; that's less than two months away. For those of you who are registered and haven't come across a petition as yet, the SUN is reprinting a fully legal version on the back page of this issue. Just tear it off and pass it around, then mail it to the address on the back. Be sure to follow the somewhat complex directions - signatures on your petition must all be from the same city or township, etc.

The 1974 Initiative petition, if it gathers enough signatures in time, will place the decriminalization (as contrasted with legalization) of marijuana on the ballot next November. After that, if it receives more than 50 per cent of the popular vote, it will become law.

The law would allow all those 18 years older over to cultivate, possess or transport weed for personal use only. It would not permit the plants' sale, or use by so called "minors." In addition, the proposed legislation would allow local governments to prohibit the use of cannabis in public by a fine not to exceed $100.

Originators of this somewhat restricted proposal (which falls short of the total and complete legalization that should eventually be enacted) feel it has the best chance of . gathering broad-based support and therefore of getting on the ballot. This is the same petition wording which recently failed to get on the California ballot. (A previous California Initiative got on the ballot and then lost state-wide with 30 per cent of the vote).

Legally, MMI will need to gather 265,000 certified signatures by July 8 (although petitions should be returned by "Independence" Day at the latest). But actually, more than that number will need to be collected in order for the proposal to get on the ballot. Past experience has shown that a decent percentage of signatures are eventually ruled invali.d by the State Attorney General for reasons of misspelled names, people who've failed to re-register, etc. Which means that MMI really needs 400,000 signatures or thereabouts.

There is no question in the minds of the initiative's organizers that here in 1974 there are at least that many people in this state who would support this proposal and are eligible to vote. At this late date, with everyone from the President's Commission to the American Medical Association calling for decriminalization of personal possession (and a successful $ 100 maximum fine in Oregon), the necessary support does exist.

The question is, can MMI mount the massive organizational and promotional campaign necessary to reach all the people in time?

In 1972, an Ann Arbor-based Marijuana Initiative spearheaded by the Rainbow People's Party collected about 50,000 signatures in about 3 months, far short of the goal. People involved in that; effort concluded after it was over that the main problems had been starting too late, and a lack of staff and funds. But no one ever questioned that with the necessary finances and organization, MMI could at least make the ballot.

The initiative process is purposely set up by the state to be cumbersome and difficult. To overcome the problems inherent in such a drive takes money, plain and simple. Money to buy media time, take out newspaper ads, pay staff salaries so that people can be free to work full time on the project, to do mailings, send people around the state, etc.

But of course, as is usually the case with people seeking broad changes in the present system of laws, this year's MMI is once again working with a basically shoestring budget and volunteer staff. Therefore it's going to take everyone's sustained assistance to make this one work.

When segments of the establishment seek to pass or fight an initiative, they have the bucks on their side. For example, this spring Ann Arbor landlords spent $45,000 to defeat the local rent control charter amendment. $45,000 would be more than enough to insure MMI's appearance on the ballot. But unlike the landlords, MMI doesn't have the bread.

So sign the petition on the back, pass it to your friends (but follow the cumbersome rules on the back) and send it in. Make sure you sign the paper exactly as your name appears on the voter registration roles, and that people signing any one petition all be registered in the same city or township.

If enough people make this effort, MMI will make it. But hopefully someday soon it will be possible to undertake efforts like this one on a high economic Ievel, so that everyone can be reached who supports legalized weed. In the meantime, even if this year's drive fails to get on the ballot, the spectre of the people organizing themselves to change the laws will once again keep elected state representatives and judges on their toes, especially when it comes time to review the present weed penalties in the legislature. Those penalties proscribe 90 days maximum for use, a possible one year for first time possession, and a maximum of 4 years (it used to be 20) for sales.