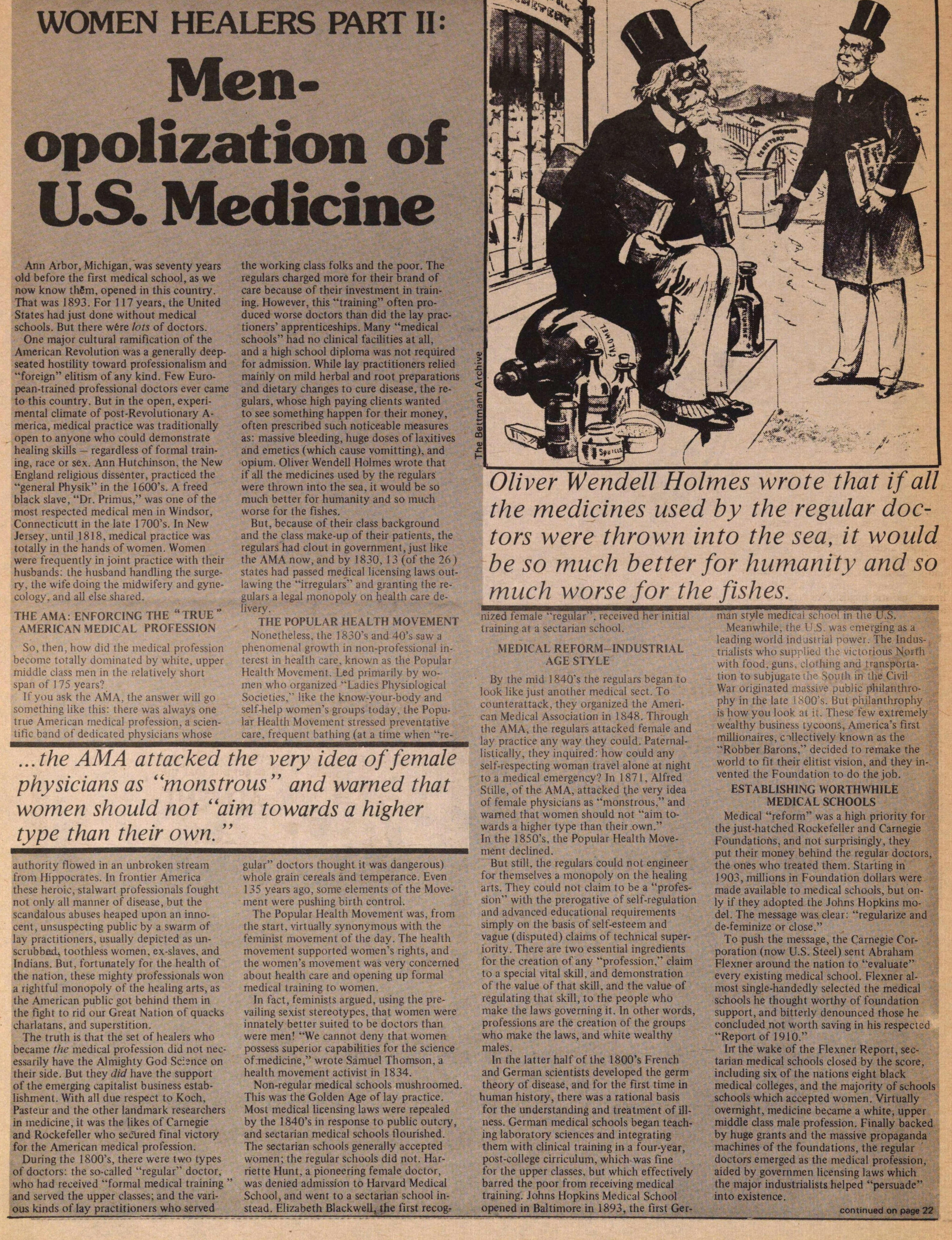 Ann Arbor, Michigan, was seventy years old before the first medical school, as we now know them, opened in this country. That was 1893. For 117 years, the United States had just done without medical schools. But there were lots of doctors.

One major cultural ramification of the American Revolution was a generally deep-seated hostility toward professionalism and "foreign" elitism of any kind. Few European-trained professional doctors ever came to this country. But in the open, experimental climate of post-Revolutionary America, medical practice was traditionally open to anyone who could demonstrate healing skills - regardless of formal training, race or sex. Ann Hutchinson, the New England religious dissenter, practiced the "general Physik" in the 1600's. A freed black slave, "Dr. Primus," was one of the most respected medical men in Windsor, Connecticut in the late 1700's. In New Jersey, until 1818, medical practice was totally in the hands of women. Women were frequently in joint practice with their husbands: the husband handling the surgery, the wife doing the midwifery and gynecology, and all else shared.

So, then, how did the medical profession become totally dominated by white, upper middle class men in the relatively short span of 175 years?

If you ask the AMA, the answer will go something like this: there was always one true American medical profession, a scientific band of dedicated physicians whose authority flowed in an unbroken stream from Hippocrates. In frontier America these heroic, stalwart professionals fought not only all manner of disease, but the scandalous abuses heaped upon an innocent, unsuspecting public by a swarm of lay practitioners, usually depicted as unscrubbed, toothless women, ex-slaves, and Indians. But, fortunately for the health of the nation, these mighty professionals won a rightful monopoly of the healing arts, as the American public got behind them in the fight to rid our Great Nation of quacks charlatans, and superstition.

The truth is that the set of healers who became the medical profession did not necessarily have the Almighty God Science on their side. But they did have the support of the emerging capitalist business establishment. With all due respect to Koch, Pasteur and the other landmark researchers in medicine, it was the likes of Carnegie and Rockefeller who secured final victory for the American medical profession.

During the 1800's, there were two types of doctors: the so-called "regular" doctor, who had received "formal medical training " and served the upper classes; and the various kinds of lay practitioners who served the working class folks and the poor. The regulars charged more for their brand of care because of their investment in training. However, this "training" often produced worse doctors than did the lay practitioners' apprenticeships. Many "medical schools" had no clinical facilities at all, and a high school diploma was not required for admission. While lay practitioners relied mainly on mild herbal and root preparations and dietary changes to cure disease, the regulars, whose high paying clients wanted to see something happen for their money, often prescribed such noticeable measures as: massive bleeding, huge doses of laxatives and emetics (which cause vomiting), and opium. Oliver Wendell Holmes wrote that if all the medicines used by the regulars were thrown into the sea, it would be so much better for humanity and so much worse for the fishes.

But, because of their class background and the class make-up of their patients, the regulars had clout in government, just like the AMA now, and by 1830, 13 (of the 26) states had passed medical licensing laws outlawing the "irregulars" and granting the regulars a legal monopoly on health care delivery.

Nonetheless, the I830's and 40's saw a phenomenal growth in non-professional interest in health care, known as the Popular Health Movement. Led primarily by women who organized "Ladies Physiological Societies," like the know-your-body and self-help women's groups today, the Popular Health Movement stressed preventative care, frequent bathing (at a time when "regular" doctors thought it was dangerous) whole grain cereals and temperance. Even 135 years ago, some elements of the Movement were pushing birth control.

The Popular Health Movement was, from the start, virtually synonymous with the feminist movement of the day. The health movement supported women's rights, and the women's movement was very concerned about health care and opening up formal medical training to women.

In fact, feminists argued, using the prevailing sexist stereotypes, that women were innately better suited to be doctors than were men! "We cannot deny that women possess superior capabilities for the science of medicine," wrote Samuel Thomson, a health movement activist in 1834.

Non-regular medical schools mushroomed. This was the Golden Age of lay practice. Most medical licensing laws were repealed by the 1840's in response to public outcry, and sectarian medical schools flourished. The sectarian schools generally accepted women; the regular schools did not. Harriette Hunt, a pioneering female doctor, was denied admission to Harvard Medical School, and went to a sectarian school instead. Elizabeth Blackwell, the first recognized female "regular", received her initial training at a sectarian school.

By the mid 1840s the regulars began to look like just another medical sect. To counterattack, they organized the American Medical Association in 1848. Through the AMA, the regulars attacked female and lay practice any way they could. Paternalistically, they inquired: how could any self-respecting woman travel alone at night to a medical emergency? In 1871, Alfred Stille, of the AMA, attacked the very idea of female physicians as ''monstrous," and warned that women should not "aim towards a higher type than their own." In the 1850's, the Popular Health Movement declined.

But still. the regulars could not engineer for themselves a monopoly on the healing arts. They could not claim to be a "profession" with the prerogative of self-regulation and advanced educational requirements simply on the basis of self-esteem and vague (disputed) claims of technical superiority. There are two essential ingredients for the creation of any "profession," claim to a special vital skill, and demonstration of the value of that skill, and the value of regulating that skill, to the people who make the laws governing it. In other words, professions are the creation of the groups who make the laws, and white wealthy males.

In the latter half of the 1800's French and German scientists developed the germ theory of disease, and for the first time in human history, there was a rational basis for the understanding and treatment of illness. German medical schools began teaching laboratory sciences and integrating them with clinical training in a four-year, post-college curriculum, which was fine for the upper classes, but which effectively barred the poor from receiving medical training. Johns Hopkins Medical School opened in Baltimore in 1893, the first German style medical school in the U.S.

Meanwhile, the U.S was emerging as a leading world industrial power. The Industrialists who supplied the victorious North with food, guns, clothing, and transportation to subjugate the South in the Civil War originated massive public philanthropy in the late 1800's. But philanthropy is how you look at it. These few extremely wealthy business tycoons, America's first millionaires, collectively known as the "Robber Barons," decided to remake the world to fit their elitist vision, and they invented the Foundation to do the job.

Medical "reform" was a high priority for the just-hatched Rockefeller and Carnegie Foundations, and not surprisingly, they put their money behind the regular doctors, the ones who treated them. Starting in 1903, millions in Foundation dollars were made available to medical schools, but only if they adopted the Johns Hopkins model. The message was clear: "regularize and de-feminize or close."

To push the message, the Carnegie Corporation (now U.S. Steel) sent Abraham Flexner around the nation to "evaluate" every existing medical school. Flexner almost single-handedly selected the medical schools he thought worthy of foundation support, and bitterly denounced those he concluded not worth saving in his respected "Report of 1910."

In the wake of the Flexner Report, sectarian medical schools closed by the score, including six of the nations eight black medical colleges, and the majority of schools schools which accepted women. Virtually overnight, medicine became a white, upper middle class male profession. Finally backed by huge grants and the massive propaganda machines of the foundations, the regular doctors emerged as the medical profession, aided by government licensing laws which the major industrialists helped "persuade" into existence.

Feeling its oats, the new medical profession then went after midwifery, the last female stronghold of medical practice. A 1912 study by Johns Hopkins indicated that most professional doctors were less competent in obstetrics and gynecology than the midwives. However, under pressure from a more and more powerful AMA, state after state outlawed midwifery in favor of the new specialty called "obstetrics." For poor women, this meant less or no obstetrical care. Immediately following the crushing of midwifery, the infant mortality rate around Washington, D.C. rose sharply. By 1920, midwifery was all but dead in the U.S. Women had been routed from their last stronghold as independent practitioners.

*Next time: Perspectives on Nursing, and the new Nurse-Activist.

...the AMA attacked the very idea of female physicians as "monstrous" and warned that women should not "aim towards a higher type than their own."

Oliver Wendell Holmes wrote that if all the medicines used by the regular doctors were thrown into the sea, it would be so much better for humanity and so much worse for the fishes.