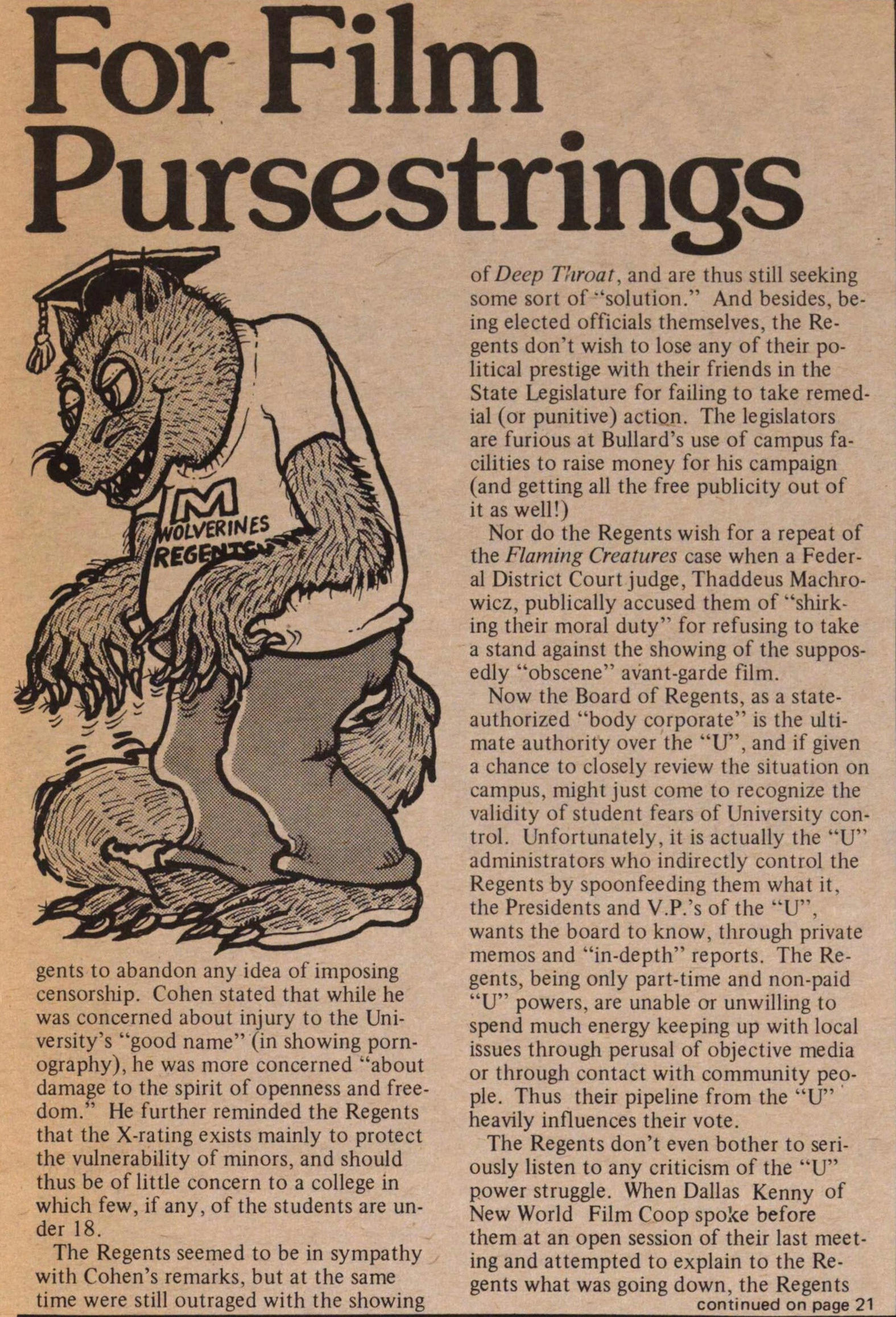 -gents to abandon any idea of imposing censorship. Cohen stated that while he was concerned about injury to the University's "good name" (in showing pornography), he was more concerned "about damage to the spirit of openness and freedom." He further reminded the Regents that the X-rating exists mainly to protect the vulnerability of minors, and should thus be of little concern to a college in which few, if any, of the students are under 18.

The Regents seemed to be in sympathy with Cohen's remarks, but at the same time were still outraged with the showing of Deep Throat, and are thus still seeking some sort of "solution." And besides, being elected officials themselves, the Regents don't wish to lose any of their political prestige with their friends in the State Legislature for failing to take remedial (or punitive) action. The legislators are furious at Bullard's use of campus facilities to raise money for his campaign (and getting all the free publicity out of it as well!)

Nor do the Regents wish for a repeat of the Flaming Creatures case when a Federal District Court judge, Thaddeus Machrowicz, publicly accused them of "shirking their moral duty" for refusing to take a stand against the showing of the supposedly "obscene" avant-garde film.

Now the Board of Regents, as a state-authorized "body corporate" is the ultimate authority over the "U", and if given a chance to closely review the situation on campus, might just come to recognize the validity of student fears of University control. Unfortunately, it is actually the "U" administrators who indirectly control the Regents by spoon-feeding them what it, the Presidents and V.P.'s of the "U", wants the board to know, through private memos and "in-depth" reports. The Regents, being only part-time and non-paid "U" powers, are unable or unwilling to spend much energy keeping up with local issues through perusal of objective media or through contact with community people. Thus their pipeline from the "U" heavily influences their vote.

The Regents don't even bother to seriously listen to any criticism of the "U" power struggle. When Dallas Kenny of New World Film Coop spoke before them at an open session of their last meeting and attempted to explain to the Regents what was going down, the Regents