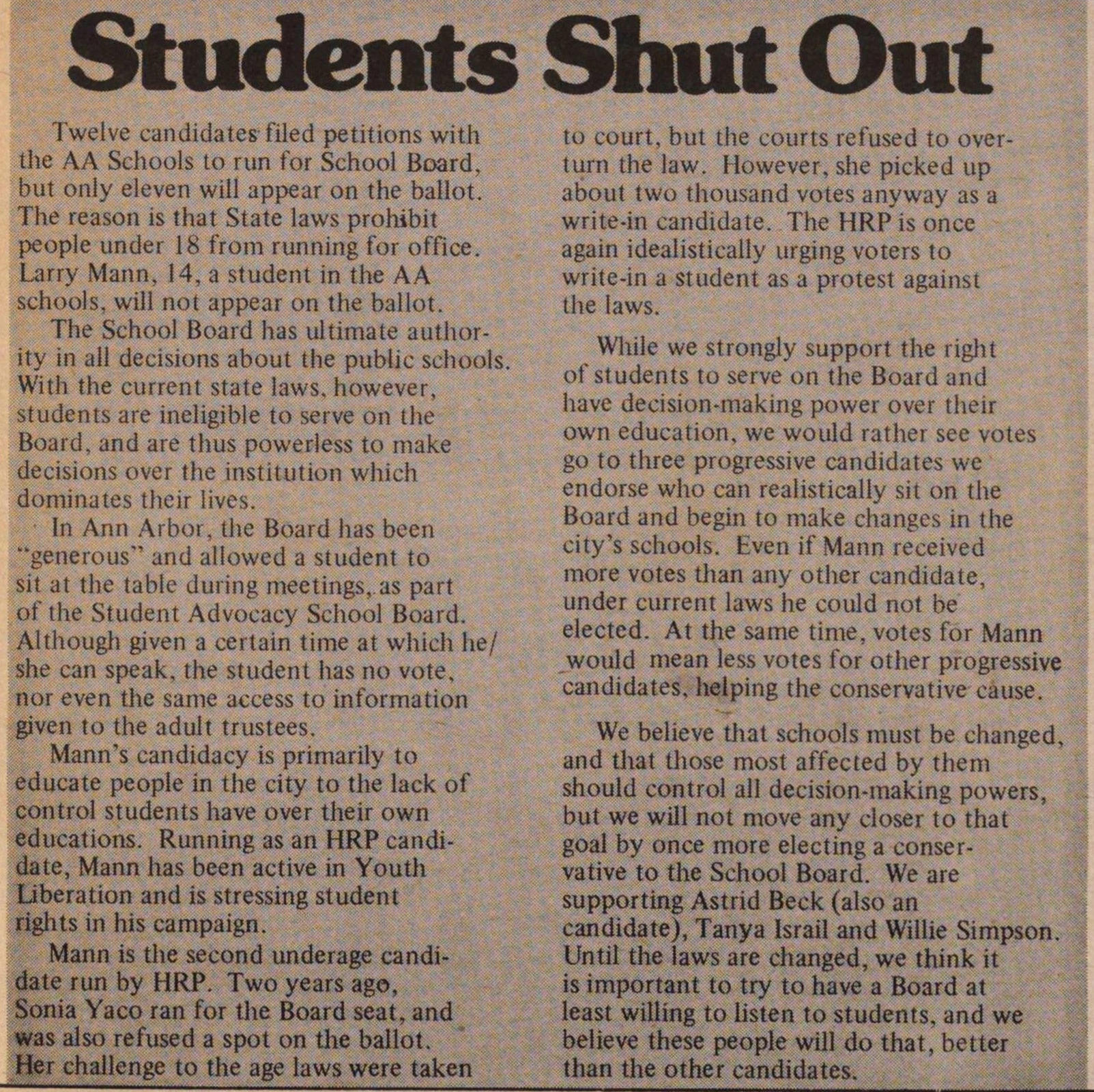 Twelve candidates filed petitions with the AA Schools to run for School Board, but only eleven will appear on the ballot. The reason is that State laws prohibit people under 18 from running for office. Larry Mann, 14, a student in the AA schools, will not appear on the ballot.

The School Board has ultimate authority in all decisions about the public schools. With the current state laws, however, students are ineligible to serve on the Board, and are thus powerless to make decisions over the institution which dominates their lives.

In Ann Arbor, the Board has been "generous" and allowed a student to sit at the table during meetings, as part of the Student Advocacy School Board. Although given a certain time at which he/she can speak, the student has no vote, nor even the same access to information given to the adult trustees.

Mann's candidacy is primarily to educate people in the city to the lack of control students have over their own educations. Running as an HRP candidate, Mann has been active in Youth Liberation and is stressing student rights in his campaign.

Mann is the second underage candidate run by HRP. Two years ago, Sonia Yaco ran for the Board seat, and was also refused a spot on the ballot. Her challenge to the age laws were taken to court, but the courts refused to over-turn the law. However, she picked up about two thousand votes anyway as a write-in candidate. The HRP is once again idealistically urging voters to write-in a student as a protest against the laws.

While we strongly support the right of students to serve on the Board and have decision-making power over their own education, we would rather see votes go to three progressive candidates we endorse who can realistically sit on the Board and begin to make changes in the city's schools. Even if Mann received more votes than any other candidate, under current laws he could not be elected. At the same time, votes for Mann would mean less votes for other progressive candidates, helping the conservative cause.

We believe that schools must be changed, and that those most affected by them should control all decision-making powers, but we will not move any closer to that goal by once more electing a conservative to the School Board. We are supporting Astrid Beck (also a candidate), Tanya Israil and Willie Simpson. Until the laws are changed, we think it is important to try to have a Board at least willing to listen to students, and we believe these people will do that, better than the other candidates.