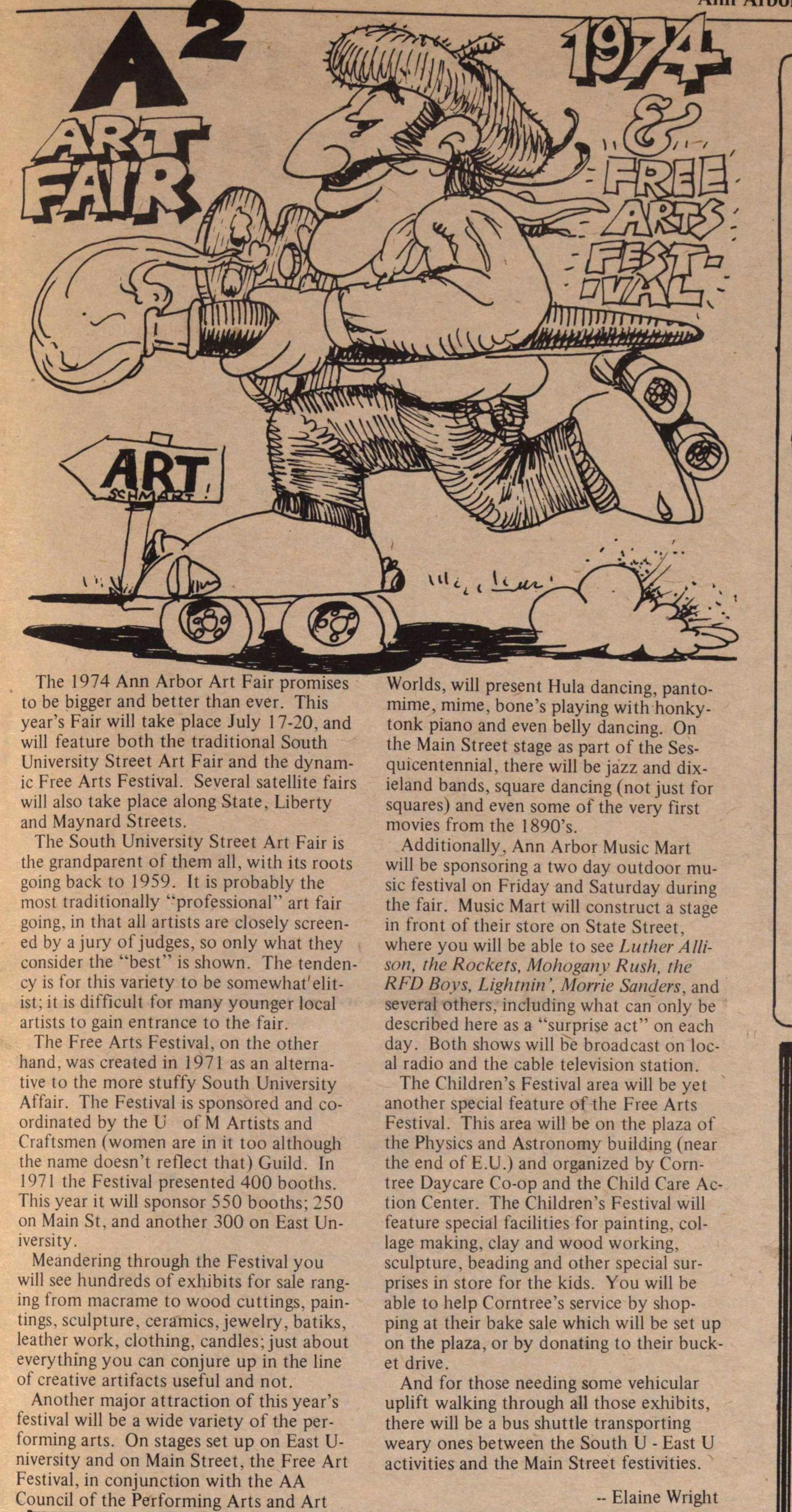 The 1974 Ann Arbor Art Fair promises to be bigger and better than ever. This year's Fair will take place July 17-20, and will feature both the traditional South University Street Art Fair and the dynamic Free Arts Festival. Several satellite fairs will also take place along State, Liberty and Maynard Streets.

The South University Street Art Fair is the grandparent of them all, with its roots going back to 1959. It is probably the most traditionally "professional" art fair going, in that all artists are closely screened by a jury of judges, so only what they consider the "best" is shown. The tendency is for this variety to be somewhat elitist; it is difficult for many younger local artists to gain entrance to the fair.

The Free Arts Festival, on the other hand, was created in 1971 as an alternative to the more stuffy South University Affair. The Festival is sponsored and coordinated by the U of M Artists and Craftsmen (women are in it too although the name doesn't reflect that) Guild. In 1971 the Festival presented 400 booths. This year it will sponsor 550 booths; 250 on Main St, and another 300 on East University.

Meandering through the Festival you will see hundreds of exhibits for sale ranging from macrame to wood cuttings, paintings, sculpture, ceramics, jewelry, batiks, leather work, clothing, candles; just about everything you can conjure up in the line of creative artifacts useful and not.

Another major attraction of this year's festival will be a wide variety of the performing arts. On stages set up on East University and on Main Street, the Free Art Festival, in conjunction with the AA Council of the Performing Arts and Art Worlds, will present Hula dancing, pantomime, mime, bone's playing with honky-tonk piano and even belly dancing. On the Main Street stage as part of the Sesquicentennial, there will be jazz and dixieland bands, square dancing (not just for squares) and even some of the very first movies from the 1890's.

Additionally, Ann Arbor Music Mart will be sponsoring a two day outdoor music festival on Friday and Saturday during the fair. Music Mart will construct a stage in front of their store on State Street, where you will be able to see Luther Allison, the Rockets, Mohogany Rush, the RFD Boys, Lightnin ', Morrie Sanders, and several others, including what can only be described here as a "surprise act" on each day. Both shows will be broadcast on local radio and the cable television station.

The Children's Festival area will be yet another special feature of the Free Arts Festival. This area will be on the plaza of the Physics and Astronomy building (near the end of E.U.) and organized by Corntree Daycare Co-op and the Child Care Action Center. The Children's Festival will feature special facilities for painting, collage making, clay and wood working, sculpture, beading and other special surprises in store for the kids. You will be able to help Corntree's service by shopping at their bake sale which will be set up on the plaza, or by donating to their bucket drive.

And for those needing some vehicular uplift walking through all those exhibits, there will be a bus shuttle transporting weary ones between the South U - East U activities and the Main Street festivities. -- Elaine Wright