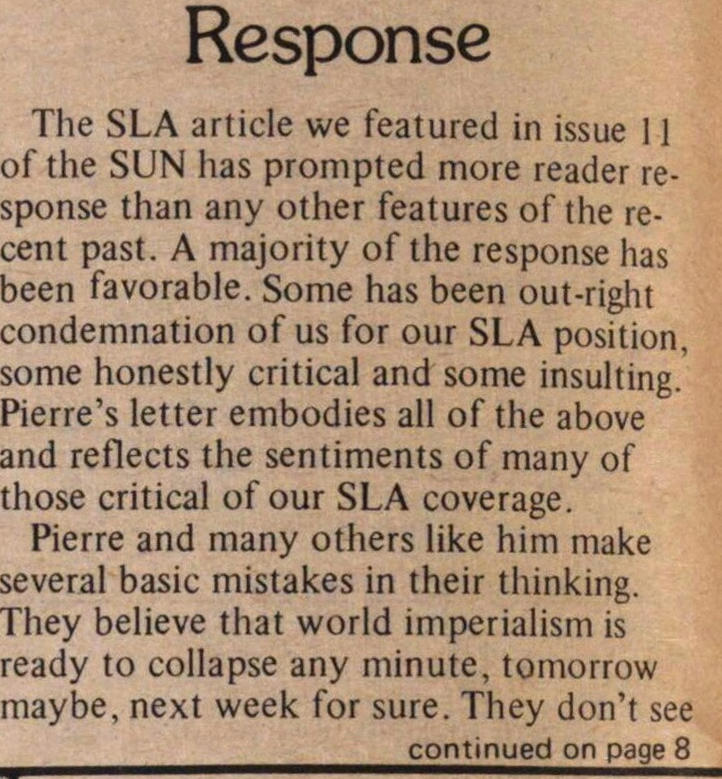 The SLA article we featured in issue ] ] of the SUN has prompted more reader response than any other features of the recent past. A majority of the response has been favorable. Some has been out-right condemnation of us for our SLA position, some honestly critical and some insulting. Pierre's letter embodies all of the above and reflects the sentiments of many of those critical of our SLA coverage. Pierre and many others like him make several basic mistakes in their thinking. They believe that world imperialism is ready to collapse any minute, tomorrow maybe, next week for sure. They don't see continued on page 8 Letters continued from Dage ? revolution as being a mass undertaking, but rather the sole glory of a handful of elitist warriors. They don't see the struggle as being a protracted one, taking place over decades, but rather an apocalyptic event where the people rise up over night, resulting in a beautiful new order in the morning. They will even try to twist Marx and Engels to fit their view. Indeed we ARE winning over the children of theruling class, not because it's the "decisive hour", but because our politics and culture present the only clear and present alternative to the American Way. For revolution to be successful, the programs and plans of action developed by would-be revolutionary organizations must meet with the approval, and win the overwhelming support, of millions upon millions of people, first in local communities then step by step to a national level. It's a mass struggle and a protracted one; it is going to take years to get organized for it. "...Judgements should sometimes be intuitive...subjective...based on deep feelings, not logic..." Pierre, like many armchair radicáis, confuses "feeling" or "thinking " with action. To them its how one "feels" or "thinks" which is the determining factor, above what one does. But what one does, how one acts in the interests of the people, this determines what is revolutionary and what is not. Actions should serve to unite, edúcate and involve the people, while drawing a clear line between the enemy and ourselves. Offing a black superintendent of schools who had the support of the black community does not measure up, it is counter-productive. "Faith," "deep feelings," "signs," these are the things of witch doctors, priests and superstition. They are not the principies on which to build a mass-movement capable of turning over this present dis-order. It was not "political expediency" which prompted us to take our position. We're sure the mayor and every reactionary would be ecstatic if we were to come out in full support of the SLA. He would then have the opportunity to paint us with the brush of fanatics with nothing to offer. He would try to use the opportunity to isolate us from our community, just as the SLA was isolated. He can't stop the Free Parks Program even if he wanted to. The people and the program are organized. and this year th City isn't giving any money to 'he program. The concerts are possible because the people are making them -- the mayor is only a hassle. We want "food for the hungry"too. Not food thrown off the back of a truck to a crowd of outstretched hands once. But an ongoing program that the people organize to meet their needs. We want them on a local, national and international level. For that reason we work in Ann Arbor, everyday, to créate an example of a comprehensive community made up of working alternative socialist programs and institutions that can win over the required mass support with diligence and time. We are not opposed to vfolence that clearly furthers the people's cause. But we are deeply opposed to violence that is motivated out of frustration, out of white guilt, out of macho visions of grandeur. Mantras do not stop bullets, but they can help one stay humble, keep sight of the long-range goal and choose the time and target well. All of which the SLA failed to do. "They did not exist to bring down the system. They existed as a sign..." Pierre says. We exist to bring down the system. There's been enough "signs" already over the last decade. We do not now need martyrs, "signs" or faded images. We need people alive and working. The question is not what are you ready to die for, but what are you ready to live for. A recent editorial in the Black Panther newspaper crystalized the experience many of us went through following the politics of emotion as currently put forward by the SLA: "A careful reading of the three SLA tapes sent to radio station KPFK in Los Angeles reveáis them as an impassioned cali for reckless, defeatist, last-ditch-stand terrorism and insurrection; 'off the pig' rhetoric completely devoid of any consciousness-raising program, method or process...The Black Panther Party has been down that road, helped by agent provacateurs and fools, and was nearly destroyed as a result. The brain trust of the SLA wants to lure Black and other oppressed youth down that same road... the road to their extinction." In strugfile, SUN Editorial Board.