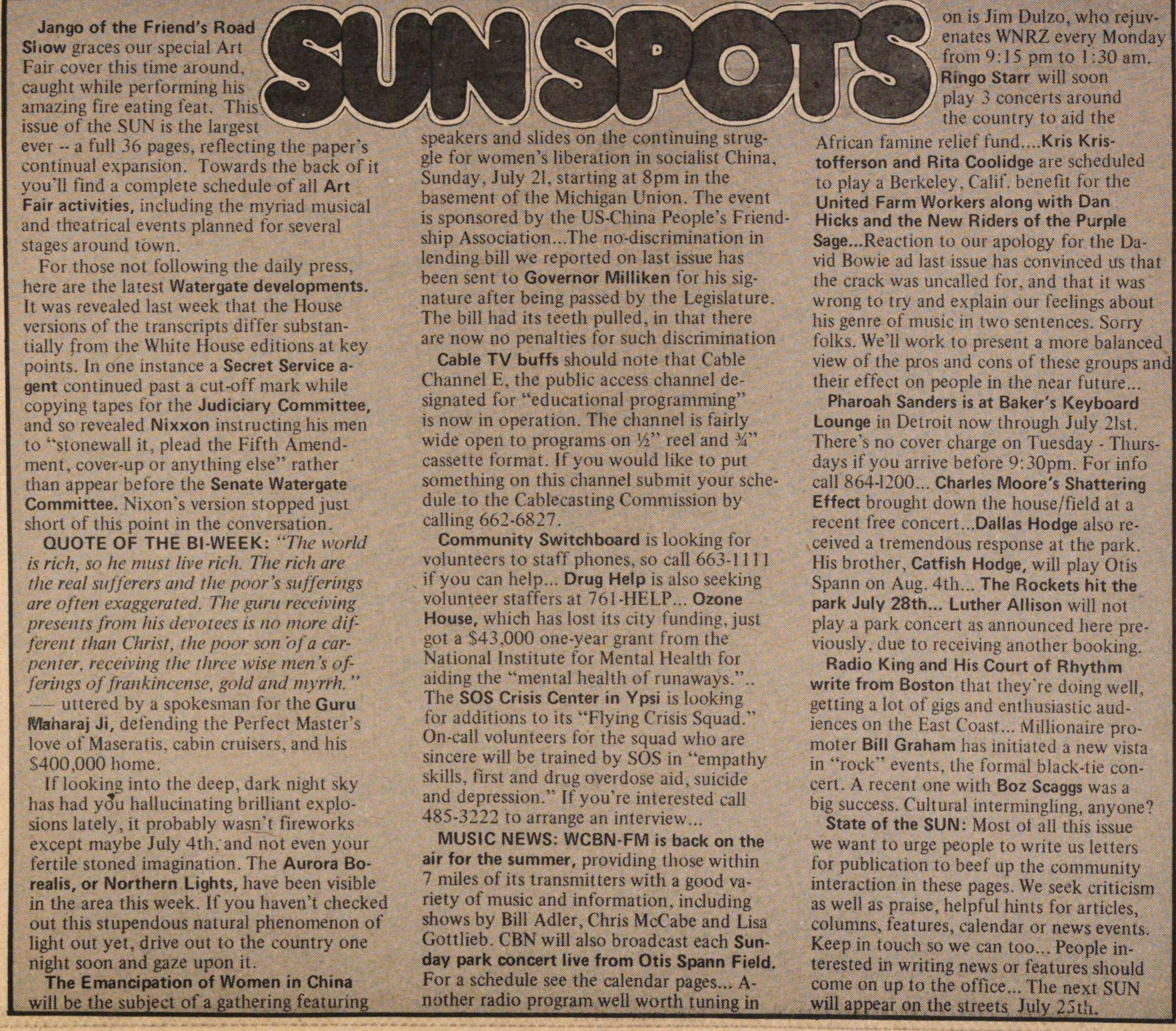 Jango of the Friend's Road Sliow graces our special Art Fair cover this time around, caught while performing his amazing fire eating feat. This issue of the SUN is the largest ever -- a ful! 36 pages, reflecting the paper's continual expansión. Towards the back of it you"]] find a complete schedule of all Art Fair activities, including the myriad musical and theatrical events planned for several stages around town. For those not following the daily press, here are the latest Watergate developments. It was revealed last week that the House versions of the transcripts differ substantially from the White iiouse editions at key points. In one instance a Secret Service agent continued past a cut-off mark while copying tapes for the Judiciary Committee, and so revealed Nixxon instructing his men to "stonewall it, plead the Fifth Amendment, cover-up or anything else" rather than appear before the Senate Watergate Committee. Nixon's version stopped just short of tliis point in the conversation. QUOTE OF THE BI-WEEK: "The wurld is rich, so lic nutst live rich. The rich are the real sujferers and the poor 's sufferings are often exaggerated. The gunt receiving preseitts from his devotees is no more different than Chris!, the poor son 'of a carpenter, receiving the tliree wise nien's offerings of frankincense, gold and myrrh. " - uttered by a spokesman for the Guru Maharaj Ji, defending the Perfect Master's love of Maseratis. cabin cruisers, and his $400,000 horoe. If looking into the deep, dark niglit sky has had yój hallucinating brilliant explosions lately, it probably wasn't fireworks except maybe July 4th. and not even your fertile stoned imagination. The Aurora Borealis, or Northern Lights, have been visible in the area this week. If you haven't checked out this stupendous natural phenomenon of light out yet, drive out to the country one night soon and gaze upon it. The Emancipation of Women in China will be the subject of a gathering featuring speakers and slides on the continumg struggle for women's liberation in socialist China, Sunday, July 21, starting at 8pm in the basement of the Michigan Union. The event is sponsored by the US-China People's Friendsliip Association...The rio-discrimination in lending bill we reported on last issue has been sent to Governor Milliken for his signature after being passed by the Legislature. The bill had its teeth pulled, in that there are now no penalties for such discrimination Cable TV buffs should note that Cable Channel E, the public access channel designated for "educational programming" is now in operation. The channel is fairly wide open to programs on '" reel and -!i" cassette format. If you would like to put something on this channel submit your schedule to the Cablecasting Commission by calling 662-6827. Community Switchboard is looking for volunteers to staff phones, so cali 663-1 1 1 1 if you can help... Drug Help is also seeking volunteer staffcrs at 761 -HELP... Ozone House, which has lost its city funding, just got a $43.000 one-year grant f rom the National Institute for Mental Health for aiding the "mental health of runaways.".. The SOS Crisis Center in Ypsi is looking for additions to its "Flying Crisis Squad." On-call volunteers for the squad who are sincere will be trained by SOS in "empathy skills, first and drugoverdose aid, suicide and depression." If you're interested cali 485-3222 to arrange an interview... MUSIC NEWS: WCBN-FM is back on the air for the summer, providing those within 7 miles of its transmitters with a good variety of music and information, including shows by Bill Adler, Chris McCabe and Lisa Gottlieb. CBN will also broadcast each Sunday park concert live from Otis Spann Field. For a schedule see the calendar pages... Another radio program well worth tuning in on is Jim Dulzo, who rejuvenates WNRZ every Monday from 9:15 pm to 1 :30 am. jRingo Starr will soon play 3 concerts around the country lo aid the African fa mine relief fund.. ..Kris Kristofferson and Rita Coolidge are scheduled to play a Berkcley. Calif. benefit for the United Farm Workers along with Dan Hicks and the New Riders of the Purple Sage...Reaction to our apology for the David Bowie ad last issue has convinced us that the crack was uncalled for, and that it was wrong to try and explain our feelings about his genre of music in two sentences. Sorry folks. We'll work to present a more balanced view of the pjos and cons of these groups and their effect on people in the near future... Pharoah Sanders is at Baker's Keyboard Lounge in Detroit now through July 2lst. There's no cover charge on Tuesday - Thursdays if you arrive before 9:30pm. For info cali 864-1200... Charles Moore's Shattering Effect brought down the housefield at a recent free concert. ..Dallas Hodge also received a tremendous response at the park. His brother, Catfish Hodge, will play Otis Spann on Aug. 4th... The Rockets hit the park July 28th... Luther Allison will not play a park concert as annuunced here previously. due to receiving another booking. Radio King and His Court of Rhythm write from Boston that they're doing well, getting a lot of gigs and enthusiastic audiences on the East Coast... Millionaire promoter Bill Graham has ínitiated a new vista in "rock" events, the formal black-tie concert. A recent one with Boz Scaggs was a big success. Cultural intermingling, aiiyone? State of the SUN: Most of all this issue we want to urge people to write us letters for publication to beef up the community interaction in these pages. We seek criticism as well as praise, helpful hints for articles, columns, features, calendar or news events. Keep in touch so we can too... People interested in writing news or features should come on up to the office... The next SUN will appear on the streets July 25t't.