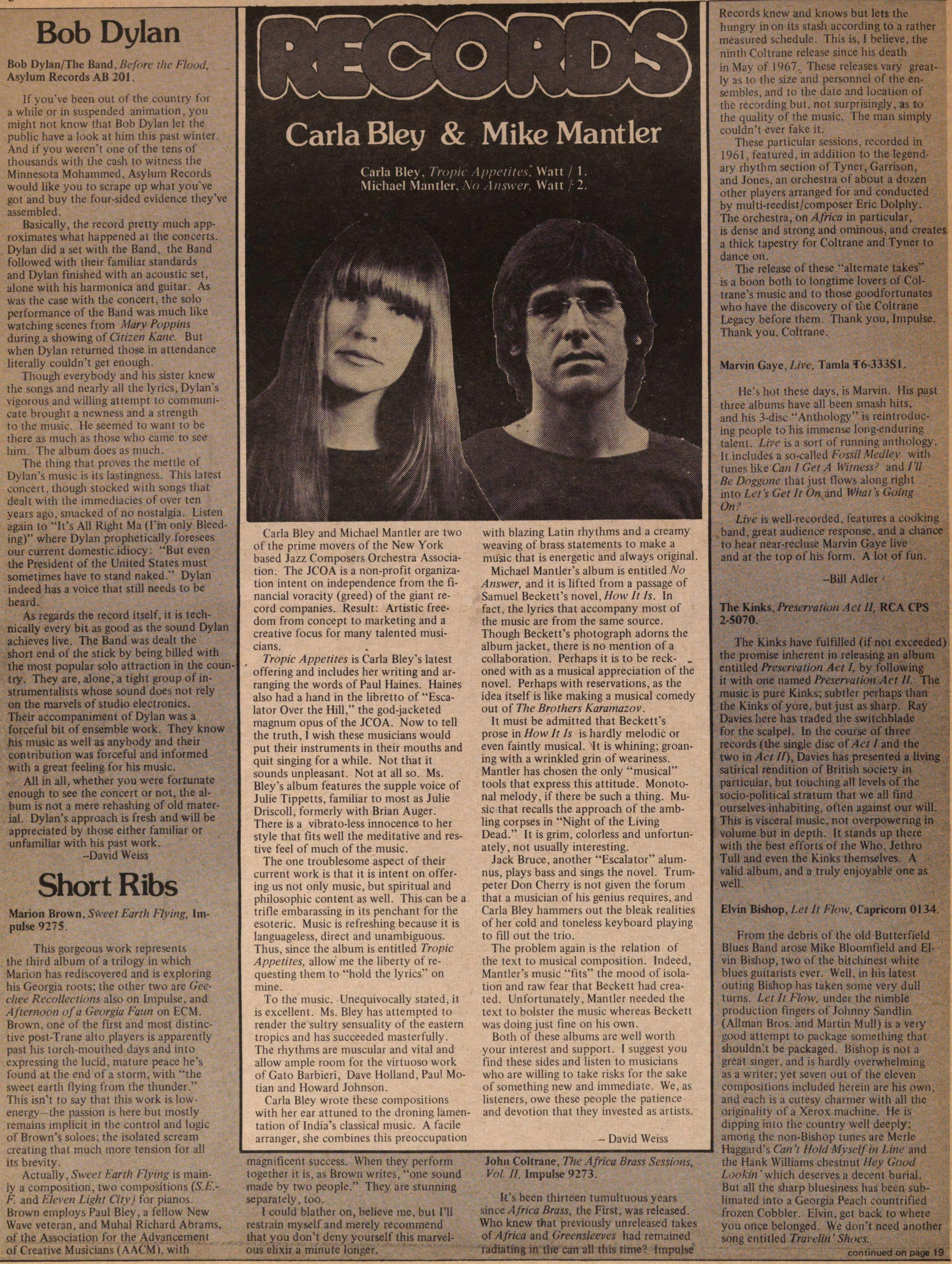 This gorgeous work represents the third album of a trilogy in which Marion has rediscovered and is exploring his Georgia roots; the other two are Geechee Recollections also on Impulse, and Afternoon of a Georgia Faun on ECM. Brown, one of the first and most distinctive post-Trane alto players is apparently past his torch-mouthed days and into expressing the lucid, mature peace he's found at the end of a storm, with "the sweet earth flying from the thunder." This isn't to say that this work is low energy -- the passion is here but mostly remains implicit in the control and logic of Brown's soloes; the isolated scream creating that much more tension for all its brevity.

Actually, Sweet Earth Flying is mainly a composition, two compositions (S.E.F. and Eleven Light City) for pianos. Brown employs Paul Bley, a fellow New Wave veteran, and Muhal Richard Abrams, of the Association for the Advancement of Creative Musicians (ÁACM), with magnificent success. When they perform together it is, as Brown writes, "one sound made by two people." They are stunning separately, too.

l could blather on, believe me, but I'll restrain myself and merely recommend that you don't deny yourself this marvelous elixir a minute longer.

It's been thirteen tumultuous years since Africa Brass, the First, was released. Who knew that previously unreleased takes of Africa and Greensleeves had remained radiating in the can all this time? Impulse Records knew and knows but Iets the hungry in on its stash according to a rather measured schedule. This is, I believe, the ninth Coltrane release since his death in May of 1967. These releases vary greatly as to the size and personnel of the ensembles, and to the date and location of the recording but, not surprisingly, as to the quality of the music. The man simply couldn't ever fake it.

These particular sessions, recorded in 1961 , featured, in addition to the legendary rhythm section of Tyner, Garrison, and Jones, an orchestra of about a dozen other players arranged for and conducted by multi-reedist/composer Eric Dolphy. The orchestra, on Africa in particular, is dense and strong and ominous, and creates a thick tapestry for Coltrane and Tyner to dance on.

The release of these "alternate takes" is a boon both to longtime lovers of Coltrane's music and to those goodfortunates who have the discovery of the Coltrane Legacy before them. Thank you, Impulse. Thank you, Coltrane.

He's hot these days, is Marvin. His past three albums have all been smash hits, and his 3-disc "Anthology" is reintroducing people to his immense long-enduring talent. Live is a sort of running anthology. It includes a so-called Fossil Medley with tunes like Can I Get A Witness? and I'll Be Doggone that just flows along right into Let 's Get It On and What's Going On?

Live is well-recorded, features a cooking band, great audience response, and a chance to hear near-recluse Marvin Gaye live and at the top of his form. A lot of fun.

The Kinks have fulfilled (if not exceeded) the promise inherent in releasing an album entitled Preservation Act I, by following it with one named Preservation Act II. The music is pure Kinks; subtler perhaps than the Kinks of yore, but just as sharp. Ray Davies here has traded the switchblade for the scalpel. In the course of three records (the single disc of Act I and the two in Act II), Davies has presented a living satirical rendition of British society in particular, but touching all levels of the socio-political stratum that we all find ourselves inhabiting, often against our will. This is visceral music, not overpowering in volume but in depth. It stands up there with the best efforts of the Who, Jethro Tull and even the Kinks themselves. A valid album, and a truly enjoyable one as well.

From the debris of the old Butterfield Blues Band arose Mike Bloomfield and Elvin Bishop, two of the bitchinest white blues guitarists ever. Well, in his latest outing Bishop has taken some very dull turns. Let It Flow, under the nimble production fingers of Johnny Sandlin (Allman Bros. and Martin Mull) is a very good attempt to package something that shouldn't be packaged. Bishop is not a great singer, and is hardly overwhelming as a writer; yet seven out of the eleven compositions included herein are his own, and each is a cutesy charmer with all the originality of a Xerox machine. He is dipping into the country well deeply; among the non-Bishop tunes are Merle Haggard's Can't Hold Myself in Line and the Hank Williams chestnut Hey Good Lookin' which deserves a decent burial. But all the sharp bluesiness has been sublimated into a Georgia Peach countrified frozen Cobbler. Elvin, get back to where you once belonged. We don't need another song entitled Travelin' Shoes.

The Incredible String Band are, like oysters, scotch, and the the films of Luis Bunuel, an acquired taste. Their Celtic trills and by and large inimitable style attracted me to them years ago. The first few albums were marvelously textured puzzle boxes, reaching a high point with U, but slipping from there. Lately they've been shifting gears, and on Hard Rope and Silken Twine they have reached another peak. It's pretty music; more even, more paced, if slightly shallower. it's mood music without being moody, magic with no sleight-of-hand. Side one starts slow, finishes furious with a rollicking number called Dumb Kate. This is to my knowledge, the first live recording ever done by the ISB. Side two, a lengthy composition by Mike Heron called ITHKOS, done in the studio, is full of rich musical language evocative of the Eastern Mediterranean. A fascinating piece of music, it shows that the String Band is now home again in its music, comfortable and friendly. It's a new sound for them, but very fresh.

Finally, I want to say a couple of words about Syreeta, the debut album by Stevie Wonder's part-time lyricist and full-time wife. Wonder, one of the most amazing of American Black musicians, wrote all the music for this lp and some lyrics, as well as doing the producing and playing keyboards. (He takes no credit for the last on the liner notes, but the distinctive ARP, piano and clavinet stylings are unmistakeably Stevie.) Syreeta has a strong and clear voice, not overflowing with character perhaps, but full of presence. The album is a touch overproduced here and there, and the songs are not the kind of get-down funk that Stevie is now into, but are competent ballads which approach but not reach his classic You are the Sunshine of my Life. All in all, a satisfying album which does not quite manage to showcase the artist as much as the power behind her.