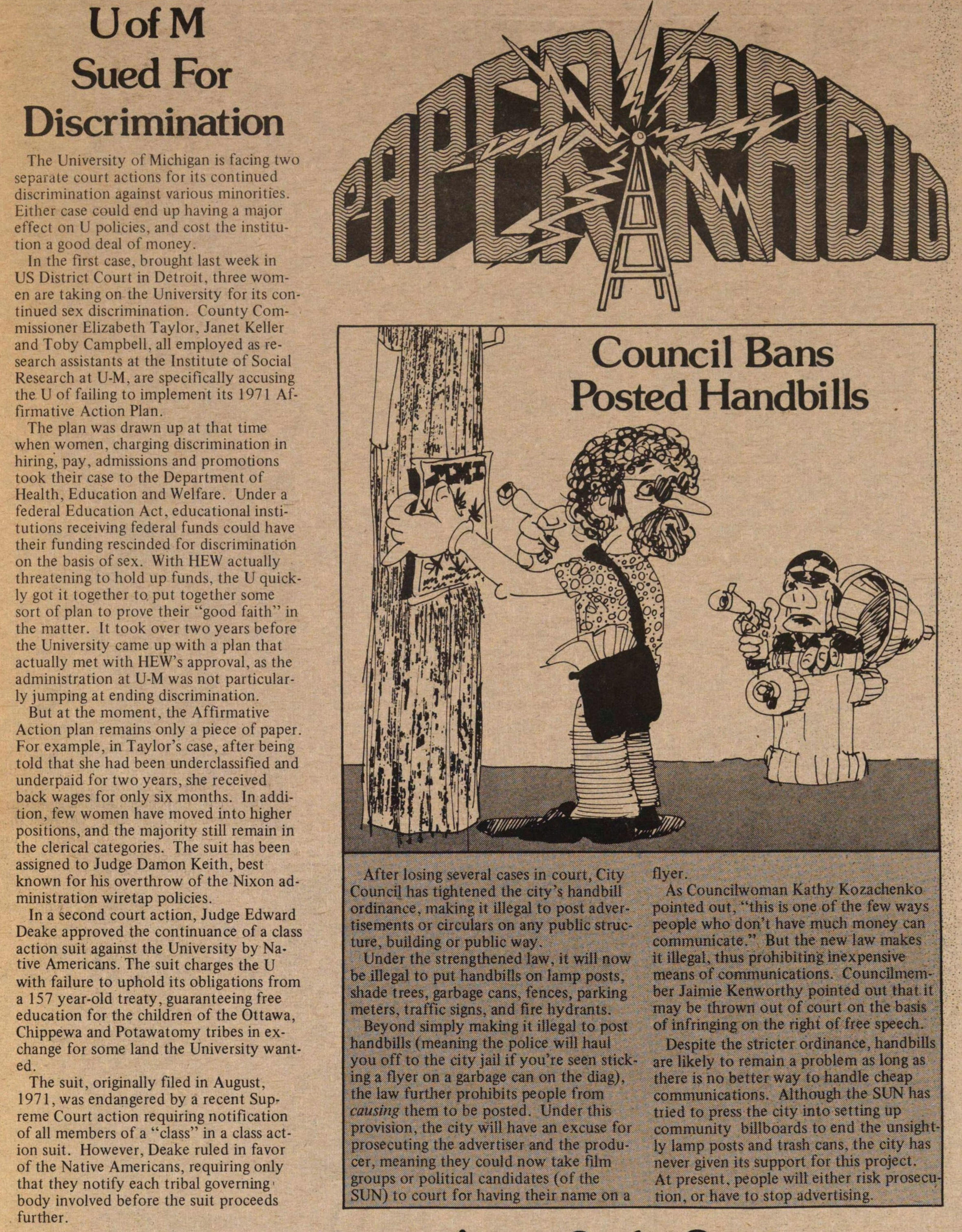 The University of Michigan is facing two sepárale court actions for its continued discrimination against various minorities. Either case could end up having a major effect on U policies, and cost the institution a good deal of money. In the first case, brought last week in LIS District Court in Detroit, three women are taking on the University for its continued sex discrimination. County Commissioner Elizabeth Taylor. Janet Keiler and Toby Campbell, all employed as research assistants at the Institute of Social Research at U-M, are specifically accusing the U of failing to implement its 1971 Affirmative Action Plan. The plan was drawn up at that time when women. charging discrimination in hiring, pay, admissions and promotions took their case to the Department of Health, Education and Welfare. Under a federal Education Act, educational institutions receiving federal funds could have their funding rescinded for discrimination on the basis of sex. With HEW actually threatening to hold up funds, the U quickly got it together to put together some sort of plan to prove their "good faith" in the matter. It took over two years before the University carne up with a plan that actually met with HEW's approval, as the administration at U-M was not particularly jumping at ending discrimination. But at the moment, the Affirmative Action plan remains only a piece of paper. For example, in Taylor's case, after being told that she had been underclassified and underpaid for two years, she received back wages for only six months. In addition, few women have moved into higher positions, and the majority still remain in the clerical categories. The suit has been assigned to Judge Damon Keith, best known for his overthrow of the Nixon administration wiretap policies. In a second court action, Judge Edward Deake approved the continuance of a class action suit against the University by Native Americans. The suit charges the U with failure to uphold its obligations from a 157 year-old treaty, guaranteeing free education for the children of the Ottawa, Chippewa and Potawatomy tribes in exchange for some land the University wanted. The suit, originally filed in August, 1971, was endangered by a recent Supreme Court action requiring notification of all members of a "class" in a class action suit. However, Deake ruled in favor of the Native Americans, requiring only that they notify each tribal governing' body involved before the suit proceeds further.