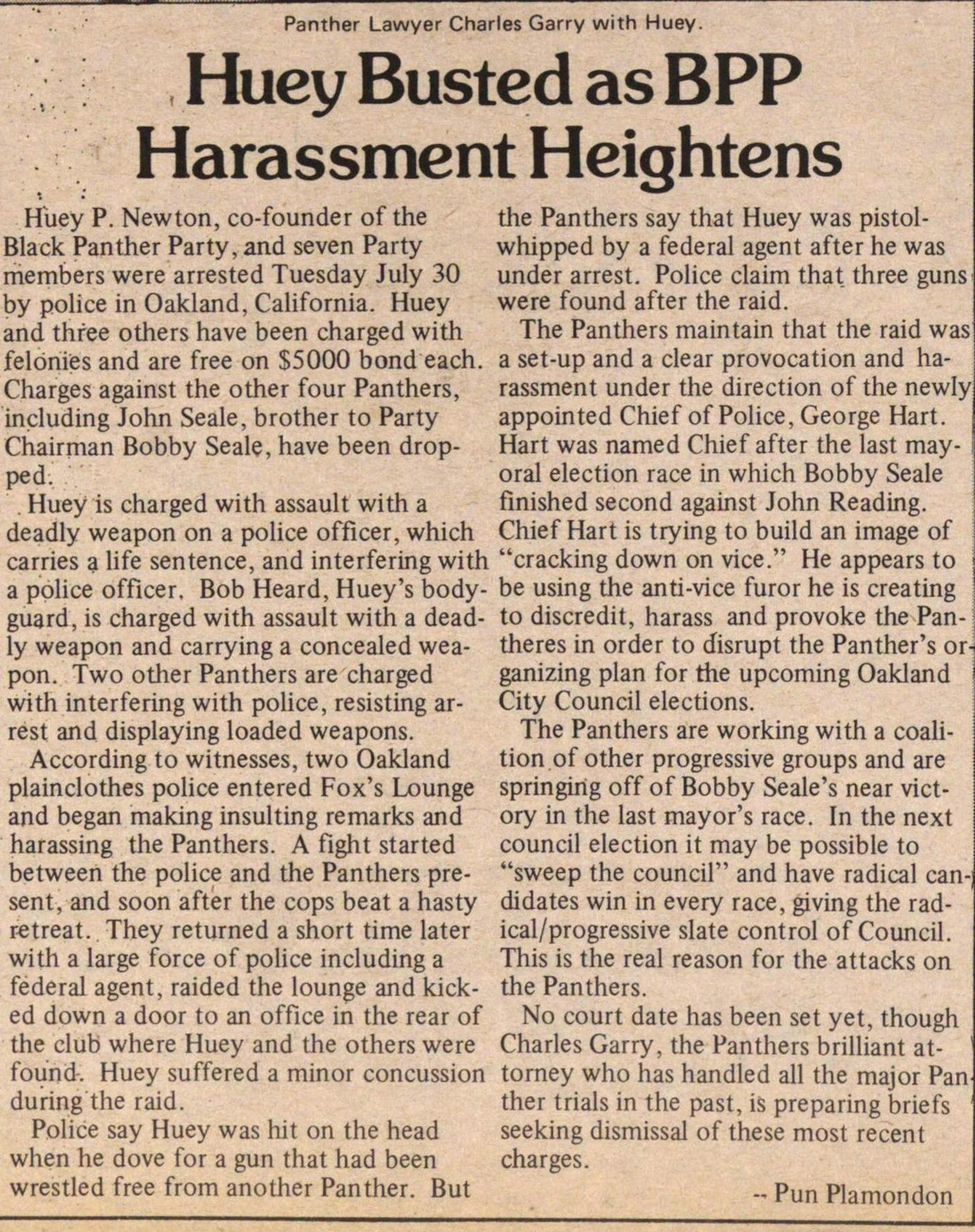 H'uey P. Newton, co-founder of the Black Panther Party, and seven Party rriembers were arrested Tuesday July 30 by pólice in Oakland, California. Huey and thfee others have been charged with felóniës and are free on $5000 bond each. Charges against the other four Panthers, including John Seale, brother to Party Chairman Bobby Seale, have been dropped. . Huey is charged with assault with a deadly weapon on a pólice officer, which carnes a life sentence, and interfering with a pólice officer. Bob Heard, Huey's bodyguard, is charged with assault with a deadly weapon and carrying a concealed weapon. Two other Panthers are charged with interfering with pólice, resisting arrest and displaying loaded weapons. According to witnesses, two Oakland plainclothes pólice entered Fox's Lounge and began making insulting remarks and harassing the Panthers. A fight started between the pólice and the Panthers present, and soon after the cops beat a hasty retreat. They returned a short time later with a large force of pólice including a federal agent, raided the lounge and kicked down a door to an office in the rear of the club where Huey and the others were found. Huey suffered a minor concussion during the raid. Pólice say Huey was hit on the head when he dove for a gun that had been wrestled free from another Panther. But the Panthers say that Huey was pistolwhipped by a federal agent after he was under arrest. Pólice claim that three guns were found after the raid. The Panthers maintain that the raid was a set-up and a clear provocation and harassment under the direction of the newly appointed Chief of Pólice, George Hart. Hart was named Chief after the last mayoral election race in which Bobby Seale finished second against John Reading. Chief Hart is trying to build an image of "cracking down on vice." He appears to be using the anti-vice furor he is creating to discredit, harass and provoke the Pantheres in order to disrupt the Panther's or ganizing plan for the upcoming Oakland City Council elections. The Panthers are working with a coalition of other progressive groups and are springirig off of Bobby Seale's near victory in the last mayor's race. In the next council election it may be possible to "sweep the council" and have radical candidates win in every race, giving the radicalprogressive slate control of Council. This is the real reason for the attacks on the Panthers. No court date has been set yet, though Charles Garry, the Panthers brilliant attorney who has handled all the major Pan ther trials in the past, is preparing briefs seeking dismissal of these most recent charges.