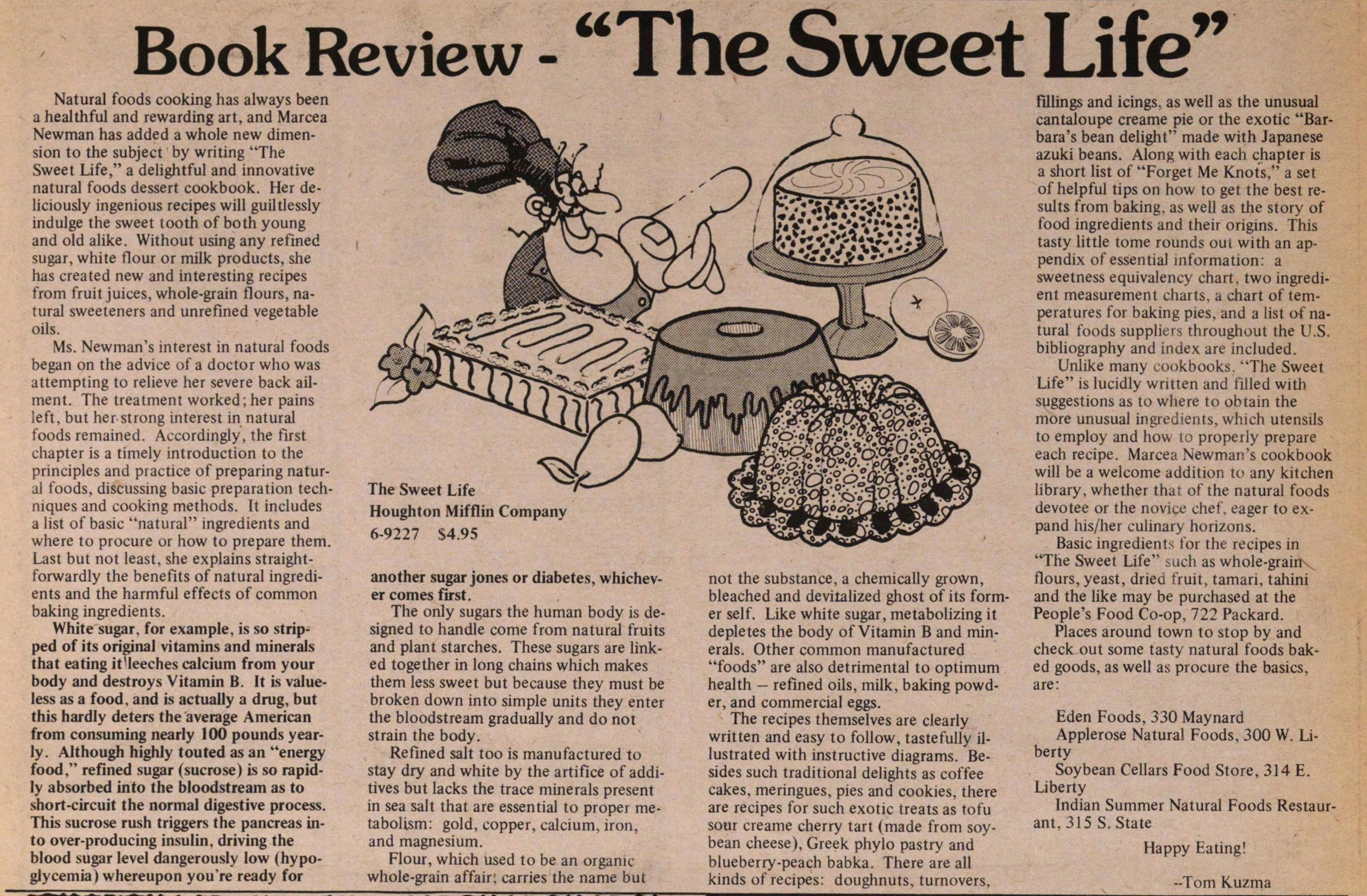 Natural foods cooking has always been a healthful and rewarding art, and Marcea Newman has added a whole new dimension to the subject by writing "The Sweet Life," a delightful and innovative natural foods dessert cookbook. Her deliciously ingenious recipes will guiltlessly indulge the sweet tooth of both young and old alike. Without using any refined sugar, white flour or milk products, she has created new and interesting recipes from fruit juices, whole-grain flours, natural sweeteners and unrefined vegetable oils.

Ms. Newman's interest in natural foods began on the advice of a doctor who was attempting to relieve her severe back ailment. The treatment worked; her pains left, but her strong interest in natural foods remained. Accordingly, the first chapter is a timely introduction to the principles and practice of preparing natural foods, discussing basic preparation techniques and cooking methods. It includes a list of basic "natural" ingredients and where to procure or how to prepare them. Last but not least, she explains straightforwardly the benefits of natural ingredients and the harmful effects of common baking ingredients.

White sugar, for example, is so stripped of its original vitamins and minerals that eating it leeches calcium from your body and destroys Vitamin B. It is valueless as a food, and is actually a drug, but this hardly deters the average American from consuming nearly 100 pounds yearly. Although highly touted as an "energy food," refined sugar (sucrose) is so rapidly absorbed into the bloodstream as to short -circuit the normal digestive process. This sucrose rush triggers the pancreas into over-producing insulin. driving the blood sugar level dangerously low (hypoglycemia) whereupon you're ready for another sugar jones or diabetes, whichever comes first.

The only sugars the human body is designed to handle come from natural fruits and plant starches. These sugars are linked together in long chains which makes them less sweet but because they must be broken down into simple units they enter the bloodstream gradually and do not strain the body.

Refined salt too is manufactured to stay dry and white by the artifice of additives but lacks the trace minerals present in sea salt that are essential to proper metabolism: gold, copper, calcium, iron, and magnesium.

Flour, which used to be an organic whole-grain affair: carries the name but not the substance, a chemically grown, bleached and devitalized ghost of its former self. Like white sugar, metabolizing it depletes the body of Vitamin B and minerals. Other common manufactured "foods" are also detrimental to optimum health - refined oils, milk, baking powder, and commercial eggs.

The recipes themselves are clearly written and easy to follow, tastefully illustrated with instructive diagrams. Besides such traditional delights as coffee cakes, meringues, pies and cookies, there are recipes for such exotic treats as tofu sour creame cherry tart (made from soybean cheese), Greek phylo pastry and blueberry-peach babka. There are all kinds of recipes: doughnuts, turnovers. fillings and icings. as well as the unusual cantaloupe creame pie or the exotic "Barbara's bean delight" made with Japanese azuki beans. Along with each chapter is a short list of "Forget Me Knots," a set of helpful tips on how to get the best results from baking, as well as the story of food ingredients and their origins. This tasty little tome rounds out with an appendix of essential information: a sweetness equivalency chart, two ingredient measurement charts, a chart of temperatures for baking pies, and a list of natural foods suppliers throughout the U.S. bibliography and index are included.

Unlike many cookbooks. "The Sweet Life" is lucidly written and filled with suggestions as to where to obtain the more unusual ingredients. which utensils to employ and how to properly prepare each recipe. Marcea Newman's cookbook will be a welcome addition to any kitchen library, whether that of the natural foods devotee or the novice chef, eager to expand his/her culinary horizons.

Basic ingredients for the recipes in "The Sweet Life" such as whole-grain flours, yeast, dried fruit, tamari, tahini and the like may be purchased at the People's Food Co-op, 722 Packard.

Places around town to stop by and check out some tasty natural foods baked goods, as well as procure the basics, are: