The Sun Is Rising... 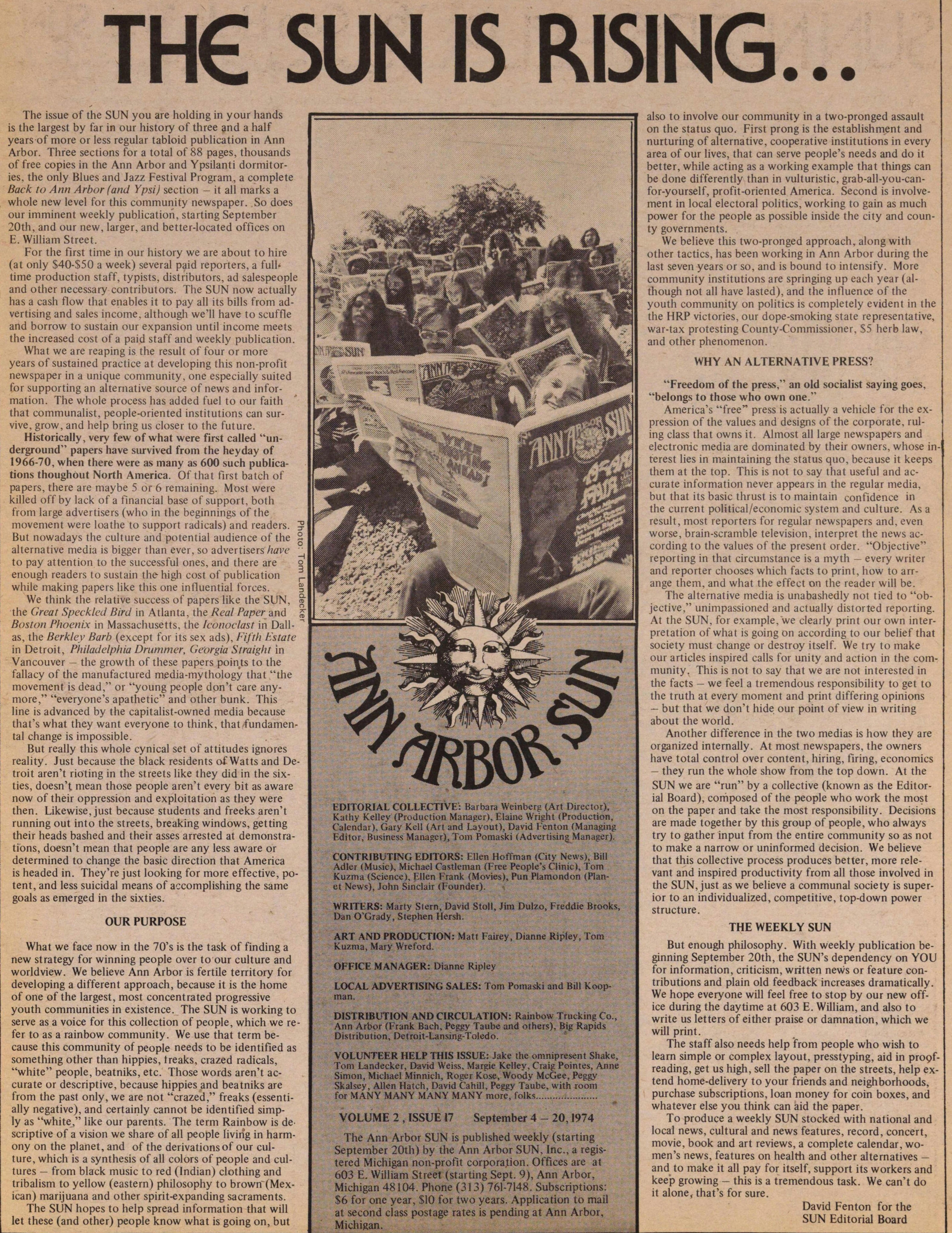 The issue of the SUN you are holding in your hands is the largest by far in our history of three and a half years of more or less regular tabloid publication in Ann Arbor. Three sections for a total of 88 pages, thousands of free copies in the Ann Arbor and Ypsilanti dormitories, the only Blues and Jazz Festival Program, a complete Back to Ann Arbor (and Ypsi) section -- it all marks a whole new level for this community newspaper. So does our imminent weekly publication, starting September 2Oth, and our new, larger, and better-located offices on E. William Street.

For the first time in our history we are about to hire (at only $40-$50 a week) several paid reporters, a full time production staff, typists, distributors, ad salespeople and other necessary contributors. The SUN now actually has a cash flow that enables it to pay all its bills from advertising and sales income, although we'll have to scuffle and borrow to sustain our expansion until income meets the increased cost of a paid staff and weekly publication.

What we are reaping is the result of four or more years of sustained practice at developing this non-profit newspaper in a unique community, one especially suited for supporting an alternative source of news and information. The whole process has added fuel to our faith that communalist, people-oriented institutions can survive, grow, and help bring us closer to the future.

Historically, very few of what were first called "underground" papers have survived from the heyday of 1966-70, when there were as many as 600 such publications thoughout North America. Of that first batch of papers, there are maybe 5 or 6 remaining. Most were killed off by lack of a financial base of support, both from large advertisers (who in the beginnings of the movement were loathe to support radicáis) and readers. But nowadays the culture and potential audience of the alternative media is bigger than ever, so advertisers have to pay attention to the successful ones, and there are enough readers to sustain the high cost of publication while making papers like this one intluential forces.

We think the relative success of papers like the SUN, the Great Speckled Bird in Atlanta, the Real Paper and Boston Phoenix in Massachusetts, the Iconoclast in Dallas, the Berkley Barb (except for its sex ads), Fifth Estate in Detroit, Philadelphia Drummer, Georgia Straight in Vancouver -- the growth of these papers points to the fallacy of the manufactured media-mythology that "the movement is dead," or "young people don't care anymore," "everyone's apathetic" and other bunk. This line is advanced by the capitalist-owned media because that's what they want everyone to think, that fundamental change is impossible.

But really this whole cynical set of attitudes ignores reality. Just because the black residents of Watts and Detroit aren't rioting in the streets like they did in the sixties, doesn't mean those people aren't every bit as aware now of their oppression and exploitation as they were then. Likewise, just because students and freeks aren't running out into the streets, breaking windows, getting their heads bashed and their asses arrested at demonstrations, doesn't mean that people are any less aware or determined to change the basic direction that America is headed in. They're just looking for more effective, potent, and less suicidal means of accomplishing the same goals as emerged in the sixties.

What we face now in the 70's is the task of finding a new strategy for winning people over to our culture and worldview. We believe Ann Arbor is fertile territory for developing a different approach, because it is the home of one of the largest, most concentrated progressive youth communities in existence. The SUN is working to serve as a voice for this collection of people, which we refer to as a rainbow community. We use that term because this community of people needs to be identified as something other than hippies, freaks, crazed radicals, "white" people, beatniks, etc. Those words aren't accurate or descriptive, because hippies and beatniks are from the past only, we are not "crazed," freaks (essentially negative), and certainly cannot be identified simply as "white," like our parents. The term Rainbow is descriptive of a vision we share of all people living in harmony on the planet, and of the derivations of our culture, which is a synthesis of all colors of people and cultures -- from black music to red (Indian) clothing and tribalism to yellow (eastern) philosophy to brown (Mexican) marijuana and other spirit-expanding sacraments.

The SUN hopes to help spread information that will let these (and other) people know what is going on, but also to involve our community in a two-pronged assault on the status quo. First prong is the establishment and nurturing of alternative, cooperative institutions in every area of our lives, that can serve people's needs and do it better, while acting as a working example that things can be done differently than in vulturistic, grab-all-you-can-for-yourself, profit-oriented America. Second is involvement in local electoral politics, working to gain as much power for the people as possible inside the city and county governments.

We believe this two-pronged approach, along with other tactics, has been working in Ann Arbor during the last seven years or so, and is bound to intensify. More community institutions are springing up each year (although not all have lasted), and the influence of the youth community on politics is completely evident in the the HRP victories, our dope-smoking state representative, war-tax protesting County-Commissioner, $5 herb law, and other phenomenon.

WHY AN ALTERNATIVE PRESS?

"Freedom of the press," an old socialist saying goes, "belongs to those who own one."

America's "free" press is actually a vehicle for the expression of the values and designs of the corporate, ruling class that owns it. Almost all large newspapers and electronic media are dominated by their owners, whose interest lies in maintaining the status quo, because it keeps them at the top. This is not to say that useful and accurate information never appears in the regular media, but that its basic thrust is to maintain confidence in the current political/economic system and culture. As a result, most reporters for regular newspapers and, even worse, brain-scramble television, interpret the news according to the values of the present order. "Objective" reporting in that circumstance is a myth -- every writer and reporter chooses which facts to print, how to arrange them, and what the effect on the reader will be.

The alternative media is unabashedly not tied to "objective," unimpassioned and actually distorted reporting. At the SUN, for example, we clearly print our own interpretation of what is going on according to our belief that society must change or destroy itself. We try to make our articles inspired calls for unity and action in the community. This is not to say that we are not interested in the facts -- we feel a tremendous responsibility to get to the truth at every moment and print differing opinions -- but that we don't hide our point of view in writing about the world.

Another difference in the two medias is how they are organized internally. At most newspapers, the owners have total control over content, hiring, firing, economics -- they run the whole show from the top down. At the SUN we are "run" by a collective (known as the Editorial Board), composed of the people who work the most on the paper and take the most responsibility. Decisions are made together by this group of people, who always try to gather input from the entire community so as not to make a narrow or uninformed decision. We believe that this collective process produces better, more relevant and inspired productivity from all those involved in the SUN, just as we believe a communal society is superior to an individualized, competitive, top-down power structure.

But enough philosophy. With weekly publication beginning September 20th, the SUN's dependency on YOU for information, criticism, written news or feature contributions and plain old feedback increases dramatically. We hope everyone will feel free to stop by our new office during the daytime at 603 E. William, and also to write us letters of either praise or damnation, which we will print.

The staff also needs help from people who wish to learn simple or complex layout, presstyping, aid in proofreading, get us high, sell the paper on the streets, help extend home-delivery to your friends and neighborhoods, purchase subscriptions, loan money for coin boxes, and whatever else you think can aid the paper.

To produce a weekly SUN stocked with national and local news, cultural and news features, record, concert, movie, book and art reviews, a complete calendar, women's news, features on health and other alternatives -- and to make it all pay for itself, support its workers and keep growing -- this is a tremendous task. We can't do it alone, that's for sure.

David Fenton for the SUN Editorial Board