A2 Politics continued from page 7 conser... 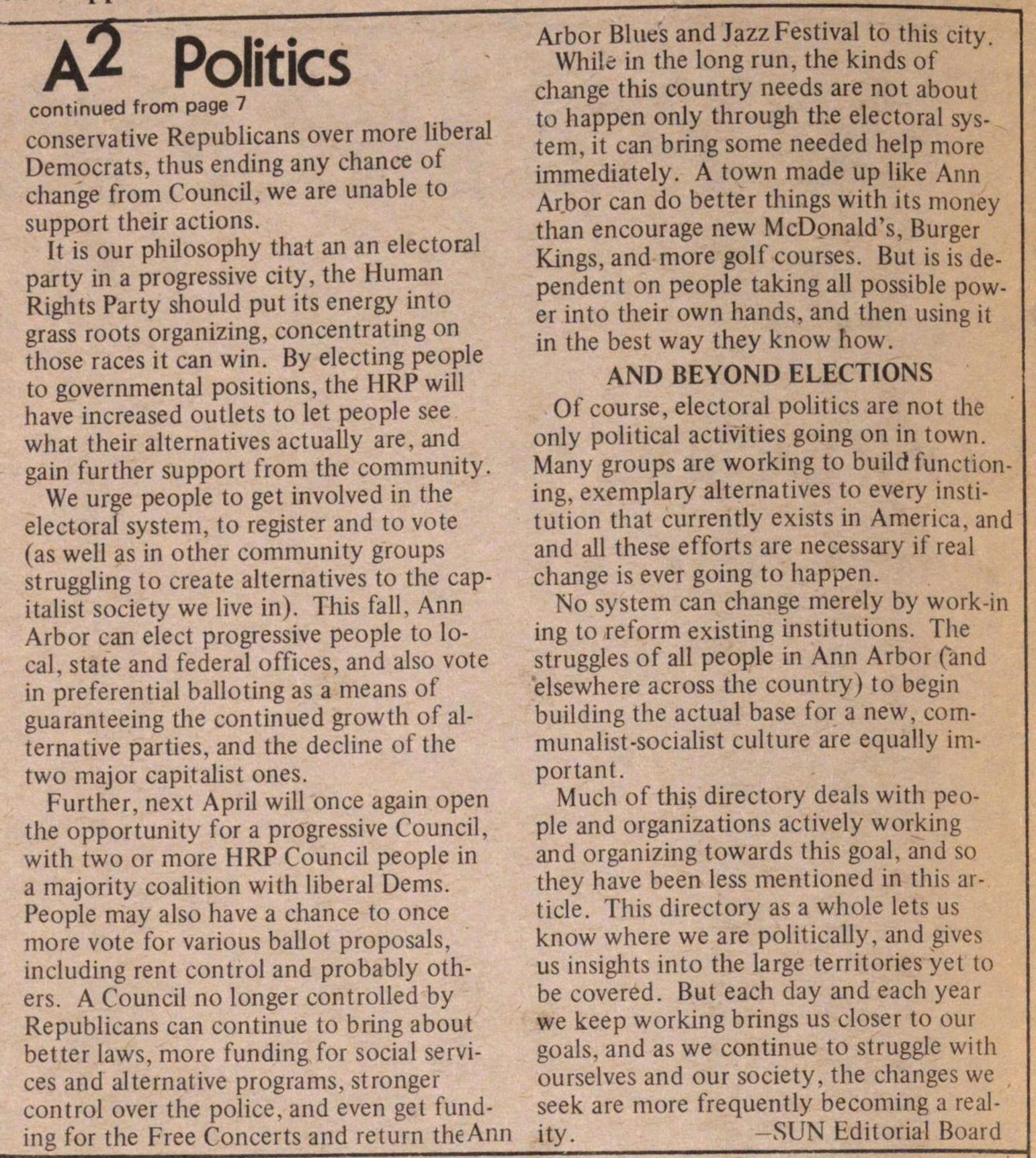 A2 Politics continued from page 7

conservative Republicans over more liberal Democrats, thus ending any chance of change from Council, we are unable to support their actions.

It is our philosophy that as an electoral party in a progressive city, the Human Rights Party should put its energy into grass roots organizing, concentrating on those races it can win. By electing people to governmental positions, the HRP will have increased outlets to let people see what their alternatives actually are, and gain further support from the community.

We urge people to get involved in the electoral system, to register and to vote (as well as in other community groups struggling to create alternatives to the capitalist society we live in). This fall, Ann Arbor can elect progressive people to local, state and federal offices, and also vote in preferential balloting as a means of guaranteeing the continued growth of alternative parties, and the decline of the two major capitalist ones.

Further, next April will once again open the opportunity for a progressive Council, with two or more HRP Council people in a majority coalition with liberal Dems. People may also have a chance to once more vote for various ballot proposals, including rent control and probably others. A Council no longer controlled by Republicans can continue to bring about better laws, more funding for social services and alternative programs, stronger control over the police, and even get funding for the Free Concerts and return the Ann Arbor Blues and Jazz Festival to this city.

While in the long run, the kinds of change this country needs are not about to happen only through the electoral system, it can bring some needed help more immediately. A town made up like Ann Arbor can do better things with its money than encourage new McDonald's, Burger Kings, and more golf courses. But it is dependent on people taking all possible power into their own hands, and then using it in the best way they know how.

Of course, electoral politics are not the only political activities going on in town. Many groups are working to build functioning, exemplary alternatives to every institution that currently exists in America, and all these efforts are necessary if real change is ever going to happen.

No system can change merely by working to reform existing institutions. The struggles of all people in Ann Arbor (and elsewhere across the country) to begin building the actual base for a new, communalist-socialist culture are equally important.

Much of this directory deals with people and organizations actively working and organizing towards this goal, and so they have been less mentioned in this article. This directory as a whole Iets us know where we are politically, and gives us insights into the large territories yet to be covered. But each day and each year we keep working brings us closer to our goals, and as we continue to struggle with ourselves and our society, the changes we seek are more frequently becoming a reality.