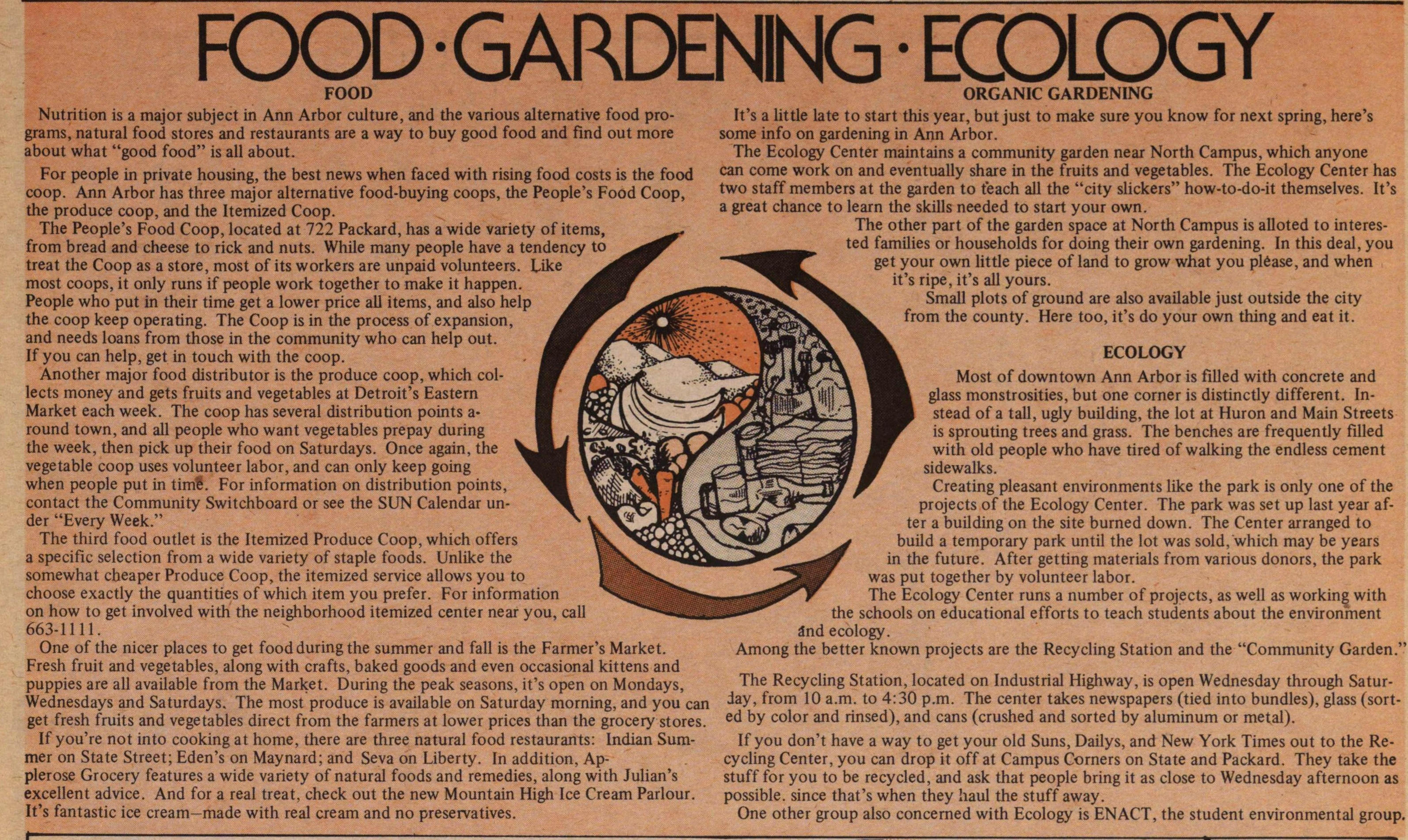 Nutrition is a major subject in Ann Arbor culture, and the various alternative food programs, natural food stores and restaurants are a way to buy good food and find out more about what "good food" is all about.

For people in private housing, the best news when faced with rising food costs is the food coop. Ann Arbor has three major alternative food-buying coops, the People's Food Coop, the produce coop, and the Itemized Coop.

The People's Food Coop, located at 722 Packard, has a wide variety of items, from bread and cheese to rick and nuts. While many people have a tendency to treat the Coop as a store, most of its workers are unpaid volunteers. Like most coops, it only runs if people work together to make it happen. People who put in their time get a lower price all items, and also help the coop keep operating. The Coop is in the process of expansion, and needs loans from those in the community who can help out. If you can help, get in touch with the coop.

Another major food distributor is the produce coop, which collects money and gets fruits and vegetables at Detroit's Eastern Market each week. The coop has several distribution points around town, and all people who want vegetables prepay during the week, then pick up their food on Saturdays. Once again, the vegetable coop uses volunteer labor, and can only keep going when people put in time. For information on distribution points, contact the Community Switchboard or see the SUN Calendar under "Every Week."

The third food outlet is the Itemized Produce Coop, which offers a specific selection from a wide variety of staple foods. Unlike the somewhat cheaper Produce Coop, the itemized service allows you to choose exactly the quantities of which item you prefer. For information on how to get involved with the neighborhood itemized center near you, call 663-1111.

One of the nicer places to get food during the summer and fall is the Farmer's Market. Fresh fruit and vegetables, along with crafts, baked goods and even occasional kittens and puppies are all available from the Market. During the peak seasons, it's open on Mondays, Wednesdays and Saturdays. The most produce is available on Saturday morning, and you can get fresh fruits and vegetables direct from the farmers at lower prices than the grocery stores.

If you're not into cooking at home, there are three natural food restaurants: Indian Summer on State Street; Eden's on Maynard; and Seva on Liberty. In addition, Applerose Grocery features a wide variety of natural foods and remedies, along with Julian's excellent advice. And for a real treat, check out the new Mountain High Ice Cream Parlour. It's fantastic ice cream-made with real cream and no preservatives.

It's a little late to start this year, but just to make sure you know for next spring, here's some info on gardening in Ann Arbor.

The Ecology Center maintains a community garden near North Campus, which anyone can come work on and eventually share in the fruits and vegetables. The Ecology Center has two staff members at the garden to teach all the "city slickers" how-to-do-it themselves. It's a great chance to learn the skills needed to start your own.

The other part of the garden space at North Campus is allotted to interested families or households for doing their own gardening. In this deal, you get your own little piece of land to grow what you please, and when it's ripe, it's all yours.

Small plots of ground are also available just outside the city from the county. Here too, it's do your own thing and eat it.

Most of downtown Ann Arbor is filled with concrete and glass monstrosities, but one corner is distinctly different. Instead of a tall, ugly building, the lot at Huron and Main Streets is sprouting trees and grass. The benches are frequently filled with old people who have tired of walking the endless cement sidewalks.

Creating pleasant environments like the park is only one of the projects of the Ecology Center. The park was set up last year after a building on the site burned down. The Center arranged to build a temporary park until the lot was sold, which may be years in the future. After getting materials from various donors, the park was put together by volunteer labor.

The Ecology Center runs a number of projects, as well as working with the schools on educational efforts to teach students about the environment and ecology.

Among the better known projects are the Recycling Station and the "Community Garden."

The Recycling Station, located on Industrial Highway, is open Wednesday through Saturday, from 10 a.m. to 4:30 p.m. The center takes newspapers (tied into bundles), glass (sorted by color and rinsed), and cans (crushed and sorted by aluminum or metal).

If you don't have a way to get your old Suns, Dailys, and New York Times out to the Recycling Center, you can drop it off at Campus Corners on State and Packard. They take the stuff for you to be recycled, and ask that people bring it as close to Wednesday afternoon as possible, since that's when they haul the stuff away.

One other group also concerned with Ecology is ENACT, the student environmental group.