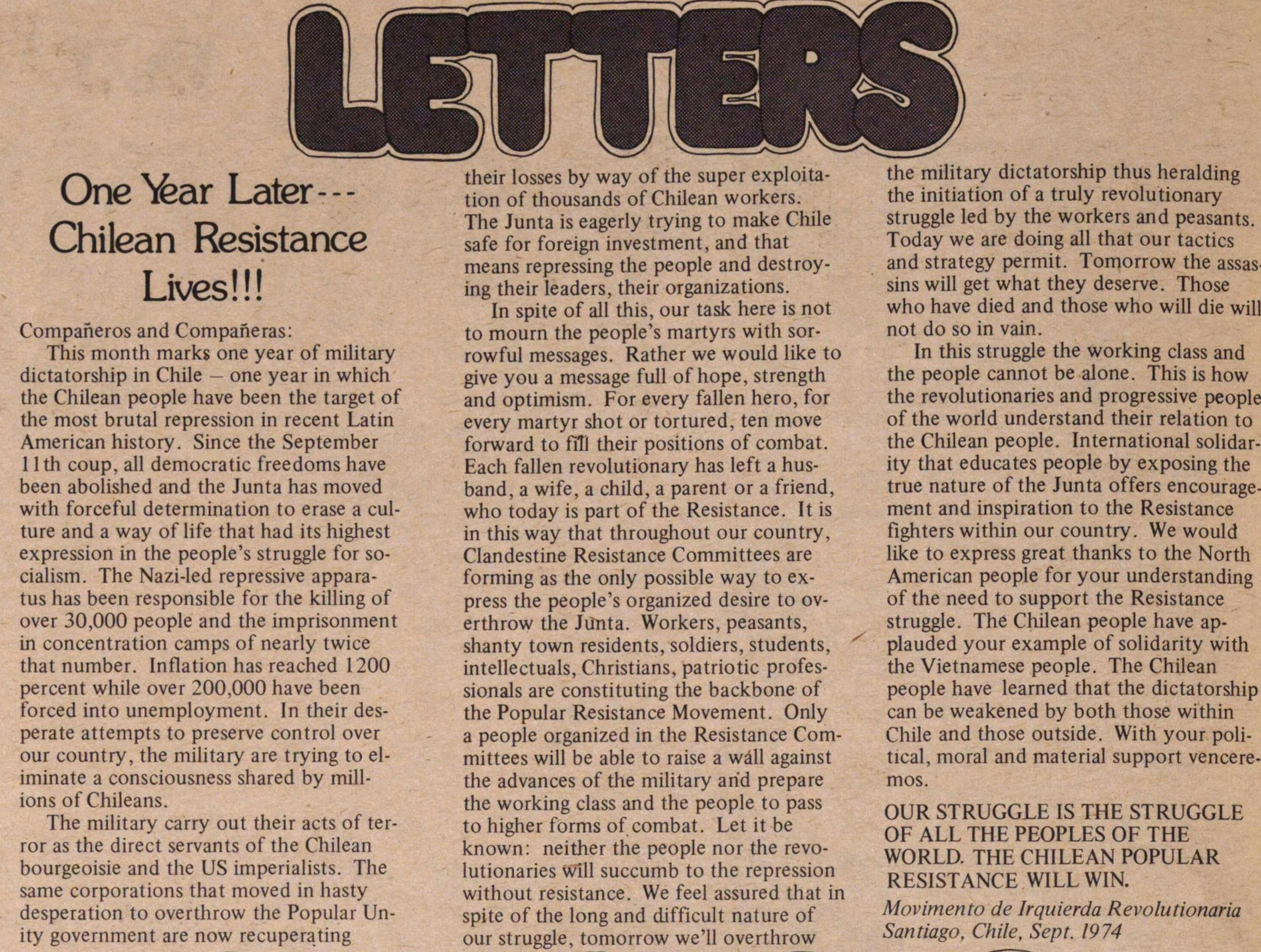 Compañeros and Compañeras: This month marks one year of military dictatorship in Chile - one year in which the Chilean people have been the target of Üie most brutal repression in recent Latin American history. Since the September 1 lth coup. all democratie freedoms have been abolished and the Junta has moved with forceful determination to erase a culture and a way of life that had its highest expression in the people's struggle for socialism. The Nazi-led repressive apparatus has been responsible for the killing of over 30,000 people and the imprisonment in concentration camps of nearly twice that number. Inflation has reached 1200 percent while over 200,000 have been forced into unemployment. In their desperate attempts to preserve control over our country, the military are trying to elimínate a consciousness shared by millions of Chileans. The military carry out their acts of terror as the direct servants of the Chilean bourgeoisie and the US imperialists. The same corporations that moved in hasty desperation to overthrow the Popular Unity government are now recuperating - - - - -" their losses by way of the super exploitation of thousands of Chilean workers. The Junta is eagerly trying to make Chile safe for foreign investment, and that means repressing the people and destroying their leaders, their organizations. In spite of all this, our task here is not to mourn the people's martyrs with sorrowful messages. Rather we would like to give you a message full of hope, strength and optimism. For every fallen hero, for every martyr shot or tortured, ten move forward to ffll their positions of combat. Each fallen revolutionary has left a husband, a wife, a child, a parent or a friend, who today is part of the Resistance. It is in this way that throughout our country, Clandestine Resistance Committees are forming as the only possible way to express the people's organized desire to overthrow the Junta. Workers, peasants, shanty town residents, soldiers, students, intellectuals, Christians, patriotic professionals are constituting the backbone of the Popular Resistance Movement. Only a people organized in the Resistance Committees will be able to raise a wáll against the advances of the military and prepare the working class and the people to pass to higher forms of combat. Let it be known: neither the people nor the revolutionaries will succumb to the repression without resistance. We feel assured that in spite of the long and difficult nature of our struegle, tomorrow we'll overthrow the military dictatorship thus heralding the initiation of a truly revolutionary struggle led by the workers and peasants. Today we are doing all that our tactics and strategy permit. Tomorrow the assas sins will get what they deserve. Those who have died and those who will die will not do so in vain. In this struggle the working class and the people cannot be alone. This is how the revolutionaries and progressive people of the world understand their relation to the Chilean people. International solidarity that educates people by exposing the true nature of the Junta offers encouragement and inspiration to the Resistance fighters within our country. We would like to express great thanks to the North American people for your understanding of the need to support the Resistance struggle. The Chilean people have applauded your example of solidarity with the Vietnamese people. The Chilean people have learned that the dictatorship can be weakened by both those within Chile and those outside. With your political, moral and material support venceremos. OUR STRUGGLE IS THE STRUGGLE OF ALL THE PEOPLES OF THE WORLD. THE CHILEAN POPULAR RESISTANCE WILL WIN. Movimento de Irquierda Revolutionaria Santiago, Chile, Sept. 1974