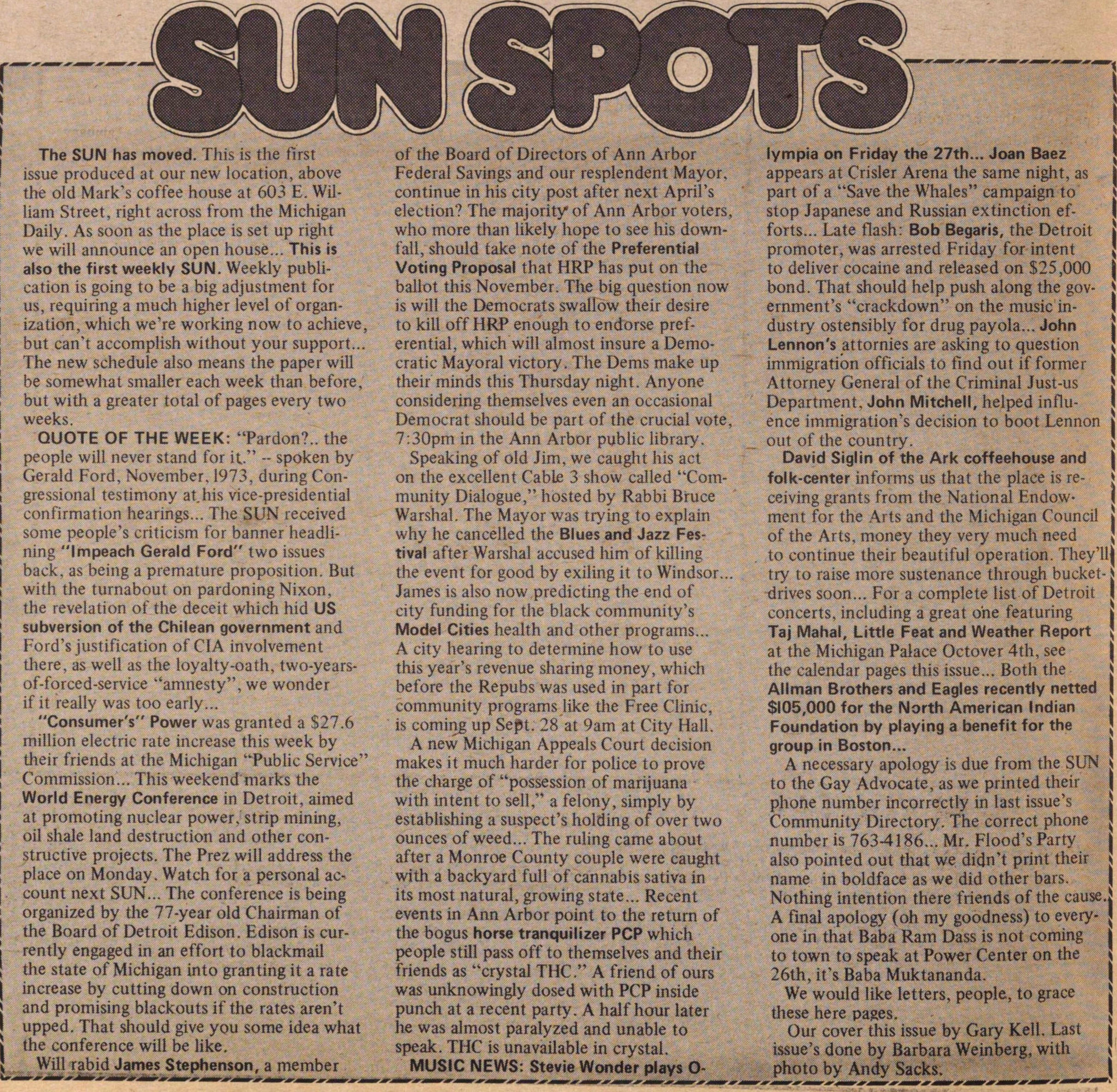 The SUN has moved. This is the flrst issue produced at our new location, above the old Mark's coffee house at 603 E. Williani Street, right across from the Michigan Daily. As soon as the place is set up right we will announce an open house... This is also the first weekly SUN. Weekly publication is going to be a big adjustment for us, requiring a much higher level of organization, which we're working now to achieve, but can't accomplish without your support... The new schedule also means the paper will be somewhat smaller each week than before, but with a greater total of pages every two weeks. QUOTE OF THE WEEK: "Pardon?., the people will never stand for it." -- spoken by Gerald Ford, November, 1973, during Congressional testimony at.his vice-presidential confirmation hearings... The SUN received some people's criticism for banner headlining "Impeach Gerald Ford" two issues back. as being a premature proposition. But with the turnabout on pardoning Nixon, the revelation of the deceit which hid US subversión of the Chilean government and Ford's justification of CIA involvement there, as well as the loyalty-oath, two-yearsof-forced-service ''amnesty", we wonder if it really was too early... "Consumer's" Power was granted a S27.6 million electric rate increase this week by their friends at the Michigan "Public Service" Commission... This weekend marks the World Energy Conference in Detroit, aimed at promoting nuclear power, strip mining, oil shale land destruction and other constructive projects. The Prez will address the place on Monday. Watch for a personal ac count next SUN... The conference is being organized by the 77-year old Chairman of the Board of Detroit Edison. Edison is currently engaged in an effort to blackmail the state of Michigan into granting it a rate increase by cutting down on construction and promising blackouts if the rates aren't upped. That should give you some idea what the conference will be like. Will rabid James Stephenson, a member - - - ' ' '" ' - I - of the Board of Directors of Ann Arbor Federal Savings and our resplendent Mayor, continue in his city post after next April's election? The majority of Ann Arbor voters, who more than likely hope to see his downfall, should take note of the Preferential Voting Proposal that HRP has put on the ballot this November. The big question now is wil! the Democrats swallow their desire to kill off HRP enough to endorse preferential, which will almost insure a Democratie Mayoral victory. The Dems make up their minds this Thursday night. Anyone considering themselves even an occasional Democrat should be part of the crucial vote, 7:30pm in the Ann Arbor public library. Speaking of oíd Jim, we caught his act on the excellent Cable 3 show called "Community Dialogue," hosted by Rabbi Bruce Warshal. The Mayor was trying to explain why he cancelled the Blues and Jazz Festival after Warshal accused him of killing the event for good by exiling it to Windsor... James is also now predicting the end of city funding for the black community's Model Cities health and other programs... A city hearing to determine how to use this year's reven ue sharing money, which before the Repubs was used in part for community programs like the Free Clinic, is coming up Sept. 28 at 9am at City Hall. A new Michigan Appeals Court decisión makes it much harder for pólice to prove the charge of "possession of marijuana with intent to sell," a felony, simply by establishing a suspect's holding of over two ounces of weed... The ruling carne about after a Monroe County couple were caught with a backyard full of cannabis sativa in its most natural, growing state... Recent events in Ann Arbor point to the return of the bogus horse tranquilizer PCP which people still pass off to themselves and their friends as "crystal THC." A friend of ours was unknowingly dosed with PCP inside punch at a recent party. A half hour later he was almost paralyzed and unable to speak. THC is unavailable in crystal. MUSIC NEWS: Stevie Wonder plays lympia on Friday the 27th... Joan Baez appears at Crisler Arena the same night, as part of a "Save the Whales" campaign to stop Japanese and Russian extinction efforts... Late flash: Bob Begaris, the Detroit promoter, was arrested Friday for intent to deliver cocaine and released on $25,000 bond. That should help push along the j ernment's "crackdown" on the music industry ostensibly for drug payóla... John Lennon 's attornies are asking to question immigration officials to find out if former Attorney General of the Criminal Just-us Department, John Mitchell, helped influence immigration's decisión to boot Lennon out of the country. David Siglin of the Ark coffeehouse and folk-center informs us that the place is ♦ ceiving grants from the National Endowment for the Arts and the Michigan Council j of the Arts, money they very much need to continue their beautiful operation. They'llj try to raise more sustenance through J drives soon... For a complete list of Detroit concerts, including a great ohe featuring Taj Mahal, Little Feat and Weather Report at the Michigan Palace Octover 4th, see the calendar pages this issue... Both the Allman Brothers and Eagles recentty netted I $105,000 for the North American Indian Í Foundation by playing a benefit for the group in Boston... A necessary apology is due from the SUN v to the Gay Advocate, as we printed their phone number incorrectly in last issue's Community Directory. The correct phone number is 7634186... Mr. Flood's Party also pointed out that we didn't print their name in boldface as we did other bars. Nothing intention there friends of the cause.j A final apology (oh my goodness) to J one in that Baba Ram Dass is not coming J to town to speak at Power Center on the 26th, it's Baba Muktananda. We would like letters, people, to grace these here pages. Our cover this issue by Gary Keil. Last issue's done by Barbara Weinberg, with photo by Andy Sacks. (