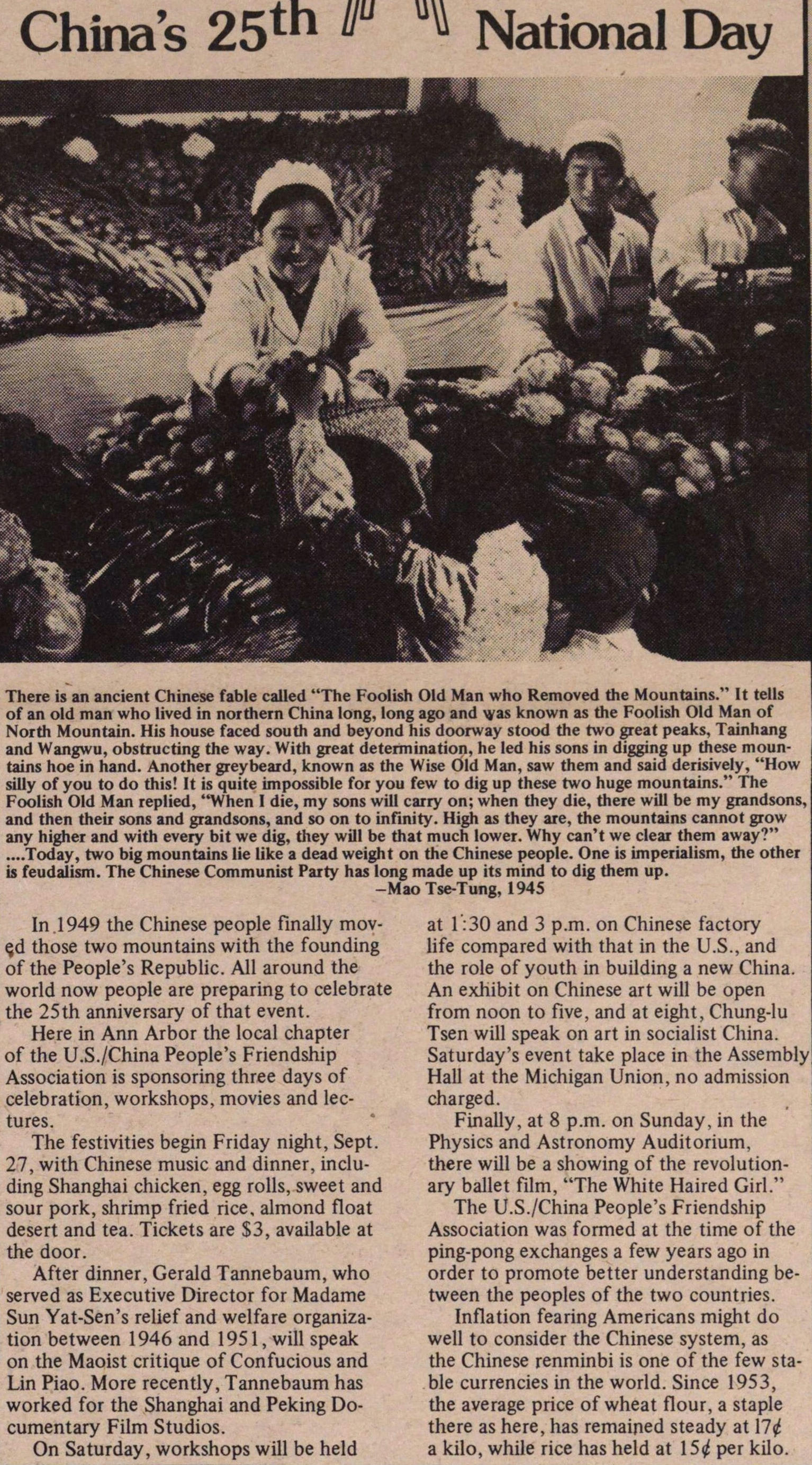 In. 1949 the Chinese people finally move,d those two mountains with the founding of the People's Republic. All around the world now people are preparing to celébrate the 25th anniversary of that event. Here in Ann Arbor the local chapter of the U.S.China People's Friendship Association is sponsoring three days of celebration, workshops, movies and lectures. The festivities begin Friday night, Sept. 27, with Chinese music and dinner, including Shanghai chicleen, egg rolls, sweet and sour pork, shrimp fried rice, almond float desert and tea. Tickets are $3, available at the door. After dinner, Gerald Tannebaum, who served as Executive Director for Madame Sun Yat-Sen's relief and welfare organization between 1946 and 1951, will speak on the Maoist critique of Confucious and Lin Piao. More recently, Tannebaum has worked for the Shanghai and Peking Documentary Film Studios. On Saturday, workshops will be held at 1:30 and 3 p.m. on Chinese factory Ufe compared with that in the U.S., and the role of youth in building a new China. An exhibit on Chinese art will be open from noon to five, and at eight, Chung-lu Tsen will speak on art in socialist China. Saturday's event take place in the Assembly Hall at the Michigan Union, no admission charged. Finally, at 8 p.m. on Sunday, in the Physics and Astronomy Auditorium, there will be a showing of the revolutionary ballet film, "The White Haired Girl." The U.S.China People's Friendship Association was formed at the time of the ping-pong exchanges a few years ago in order to promote better understanding between the peoples of the two countries. Inflation fearing Americans might do well to consider the Chinese system, as the Chinese renminbi is one of the few stable currencies in the world. Since 1953, the average price of wheat flour, a staple there as here, has remained steady at 17 a kilo, while rice has held at 15 per kilo. There is an ancient Chinese fable called "The Foolish Oíd Man who Removed the Mountains." It tells of an old man who lived in northern China long, long ago and was known as the Foolish Old Man of North Mountain. His house faced south and beyond his doorway stood the two great peaks. Tainhang and Wangwu, obstructing the way. With great determination. he led his sons in digging up these mountains hoe in hand. Anothet greybeard, known as the Wise Old Man, saw them and said derisively, "How silly of you to do this! It is quite impossible for you few to dig up these two huge mountains." The Foolish Old Man replied, "When I die, my sons will carry on; when they die, there will be my grandsons, and then their sons and grandsons, and so on to infinity. High as they are, the mountains cannot grow any higher and with every bit we dig, they will be that much lower. Why can't we clear them away?" ....Today, two big mountains lie like a dead weight on the Chinese people. One is imperialism, the other is feudalism. The Chinese Communist Party has long made up its mind to dig them up. -Mao Tse-Tung, 1945