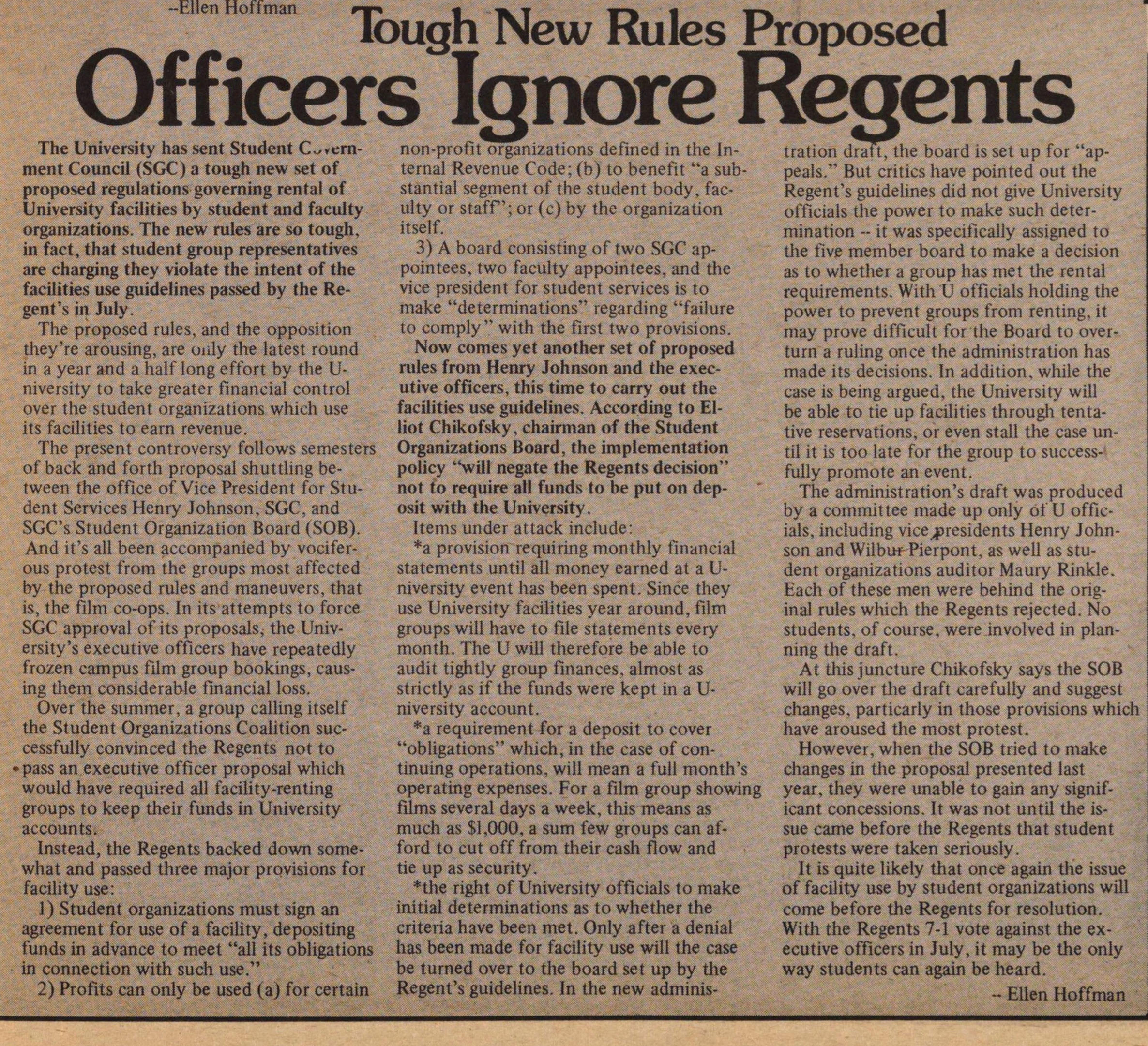 The University has sent Student C.ernment Council (SGC) a tough new set of proposed regulations governing rental of University facilities by student and faculty organizations. The new rules are so tough, in fact, that student group representatives are charging they viólate the intent of the facilities use guídelines passed by the Regent 's in July. The proposed rules, and the opposition they're arousing, are only the latest round in a year and a half long effort by the University to take greater financia! control over the student organizations which use its facilities to earn revenue. The present controversy follows semesters of back and forth proposal shuttling between the office of Vice President for Student Services Henry Johnson, SGC, and SGC's Student Organization Board (SOB). And it's all been accompanied by vociferous protest from the groups most affected by the proposed rules and maneuvers, that is, the film co-ops. In its attempts to force SGC approval of its proposals the University's executive officers have repeatedly frozen campus film group bookings, causing them considerable fïnancial loss. Over the summer, a group calling itself the Student Organizations Coalition successfully convinced the Regents not to pass an executive officer proposal which would have required all facility-renting groups to keep their funds in University accounts. Instead, the Regents backed down somewhat and passed three major provisions for facility use: 1 ) Student organizations must sign an agreement for use of a facility, depositing funds in advance to meet "all its obligations in connection with such use." 2) Profits can only be used (a) for certain non-proht orgamzations defined in the Internal Revenue Code;(b) to benefit "a substantial segment of the student body, faculty or staff'; or (c) by the organiza tion itself. 3) A board consisting of two SGC appointees, two faculty appointees, and the vice president for student services is to make "determinations" regarding "failure to comply" with the first two provisions. Now comes yet another set of proposed rules from Henry Johnson and the executive officers, this time to carry out the facilities use guidelines. According to Elliot Chikofsky, chairman of the Student Organizations Board, the imptementation policy "will negate the Regents decisión" not to require all funds to be put on deposit with the University. Items under attack include: a provisión requiring monthly financial statements until all money earned at a University event has been spent. Since they use University facilities year around, film groups will have to file statements every month. The U will therefore be able to audit tightly group finances, almost as strictly as if the funds were kept in a University account. a requirement for a deposit to cover "obligations" which, in the case of continuing operations, will mean a full month's operating expenses. For a film group showing films several days a week, this means as much as $1,000, a sum few groups can afford to cut off from their cash flow and tie up as security. the right of University officials to make initial determinations as to whether the criteria have been met. Only after a denial has been made for facility use will the case be turned over to the board set up by the Regent's guidelines. In the new tration draft, the board is set up for "appeals." But critics have pointed out the Regent' s guidelines did not give University officials the power to make such determination -- it was specifically assigned to the five member board to make a decisión as to whether a group has met the rental requirements. With U officials holding the power to prevent groups from renting, it may prove difficult for the Board to overturn a ruling once the administration has made its decisions. In addition. while the case is being argued, the University will be able to tie up facilities through tentative reservations, or even stall the case until it is too late for the group to successfully promote an event. The administration 's draft was produced by a committee made up only of U officials, including vicepresidents Henry Johnson and Wilbur Pierpont, as well as student organizations auditor Maury Rinkle. Each of these men were behind the original rules which the Regents rejected. No students. of course. were involved in planning the draft. At this juncture Chikofsky says the SOB will go over the draft carefully and suggest changes, particarly in those provisions which have aroused the most protest. However, when the SOB tried to make changes in the proposal presented last year, they were unable to gain any significant concessions. It was not until the issue carne before the Regents that student protests were taken seriously. It is quite likely that once again the issue of facility use by student organizations will come before the Regents for resolution. With the Regents 7-1 vote against the executive officers in July, it may be the oniy way students can again be heard.