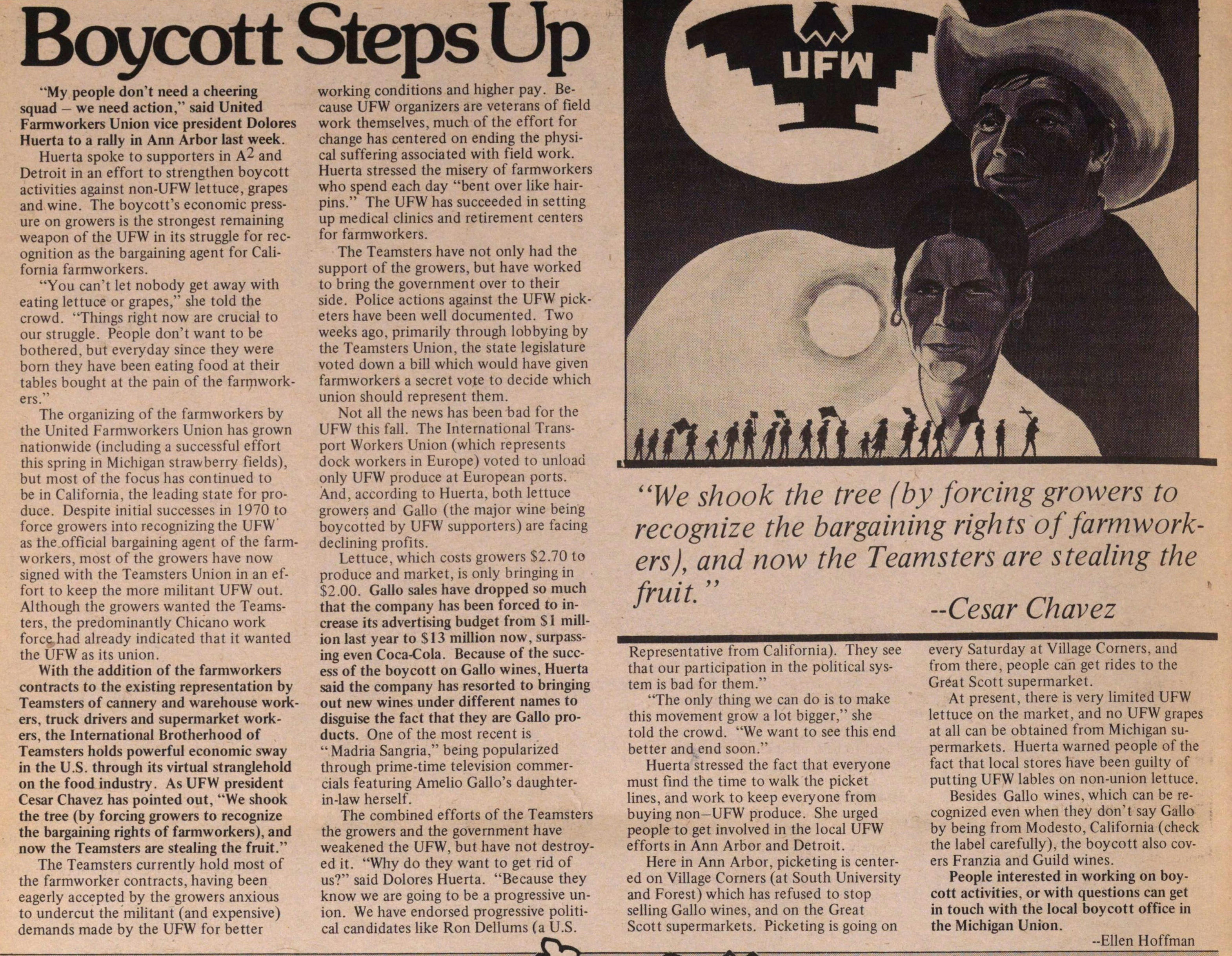 "My people don't need a cheering squad - we need action," said United Farmworkers Union vice president Dolores Huerta to a rally in Ann Arbor last week. Huerta spoke to supporters in A2 and Detroit in an effort to strengthen boycott activities against non-UFW lettuce, grapes and wine. The boycott's economie pressure on growers is the strongest remaining weapon of the UFW in its struggle for recognition as the bargaining agent for California farmworkers. "You can't let nobody get away with eating lettuce or grapes," she told the crowd. "Things right now are crucial to our struggle. People don't want to be bothered, but everyday since they were born they have been eating food at their tables bought at the pain of the farmworkers." The organizing of the farmworkers by the United Farmworkers Union has grown nationwide (including a successful effort this spring in Michigan strawberry fields), but most of the focus has continued to be in California, the leading state for produce. Despite initial successes in 1970 to force growers into recognizing the UFW' as the. official bargaining agent of the farmworkers, most of the growers have now signed with the Teamsters Union in an effort to keep the more militant UFW out. Although the growers wanted the Teamsters, the predominantly Chicano work force. had already indica ted that it wanted the UFW as its union. With the addition of the farmworkers contract to the existing representation by Teamsters of cannery and warehouse workers, truck drivers and supermarket workers, the International Brotherhood of Teamsters holds powerful economie sway in the U.S. through its virtual stranglehold on the food industry. As UFW president Cesar Chavez has pointed out, "We shook the tree (by forcing growers to recognize the bargaining rights of farmworkers), and now the Teamsters are stealing the fruit." The Teamsters currently hold most of the farmworker contracts, having been eagerly accepted by the growers anxious to undercut the militant (and expensive) demands made by the UFW for better working conditions and higher pay. Because UFW organizers are veterans of field work themselves, much of the effort for change has centered on ending the physical suffering associated with field work. Huerta stressed the misery of farmworkers who spend each day "bent over like hairpins." The UFW has succeeded in setting up medical clinics and retirement centers for farmworkers. The Teamsters have not only had the support of the growers, but have worked to bring the government over to their side. Pólice actions against the UFW picketers have been well documented. Two weeks ago. primarily through lobbying by the Teamsters Union, the state legislature voted down a bilí which would have given farmworkers a secret vote to decide which union should represent them. Not all the news has been bad for the UFW this fall. The International Transport Workers Union (which represents doek workers in Europe) voted to unload only UFW produce at European ports. And, according to Huerta, both lettuce growers and Gallo (the major wine being boycotted by UFW supporters) are facing declining profits. Lettuce, which costs growers $2.70 to produce and market, is only bringing in $2.00. Gallo sales have dropped so much that the company has been forced to increase its advertising budget from S 1 million last year to SI 3 million now, surpassing even Coca-Cola. Because of the success of the boycott on Gallo wines, Huerta said the company has resorted to bringing out new wines under different names to disguise the fact that they are Gallo products. One of the most recent is " Madria Sangría," being popularized through prime-time televisión commercials featuring Amelio Gallo's daughterin-law herself. The combined efforts of the Teamsters the growers and the government have weakened the UFW, but have not destroyed it. "Why do they want to get rid of us?" said Dolores Huerta. "Because they know we are going to be a progressive union. We have endorsed progressive political candidates like Ron Dellums (a U.S. Representative from California). They see that our participation in the political system is bad for them." "The only thing we can do is to make this movement grow a lot bigger," she told the crowd. "We want to see this end better and end soon." Huerta stressed the fact that everyone must find the time to walk the picket lines, and work to keep everyone from buying non-UFW produce. She urged people to get involved in the local UFW efforts in Ann Arbor and Detroit. Here in Ann Arbor, picketing is centered on Village Corners (at South University and Forest) which has refused to stop selling Gallo wines, and on the Great Scott supermarkets. Picketing is going on every Saturday at Village t orners, and from there, people can get rides to the Great Scott supermarket. At present, there is very limited UFW let tuce on the market, and no UFW grapes at all can be obtained from Michigan supermarkets. Huerta warned people of the fact that local stores have been guilty of putting UFW lables on non-union lettuce. Besides Gallo wines, which can be recognized even when they don't say Gallo by being from Modesto, California (check the label carefully), the boycott also covers Franzia and Guild wines. People nterested in working on boycott activities, or with questions can get in touch with the local boycott office in the Michigan Union. "We shook the tree (by forcing growers to recognize the bargaining rights of 'farmworkers), and now the Teams ters are stealing the ruit. „ „j --Cesar Chavez