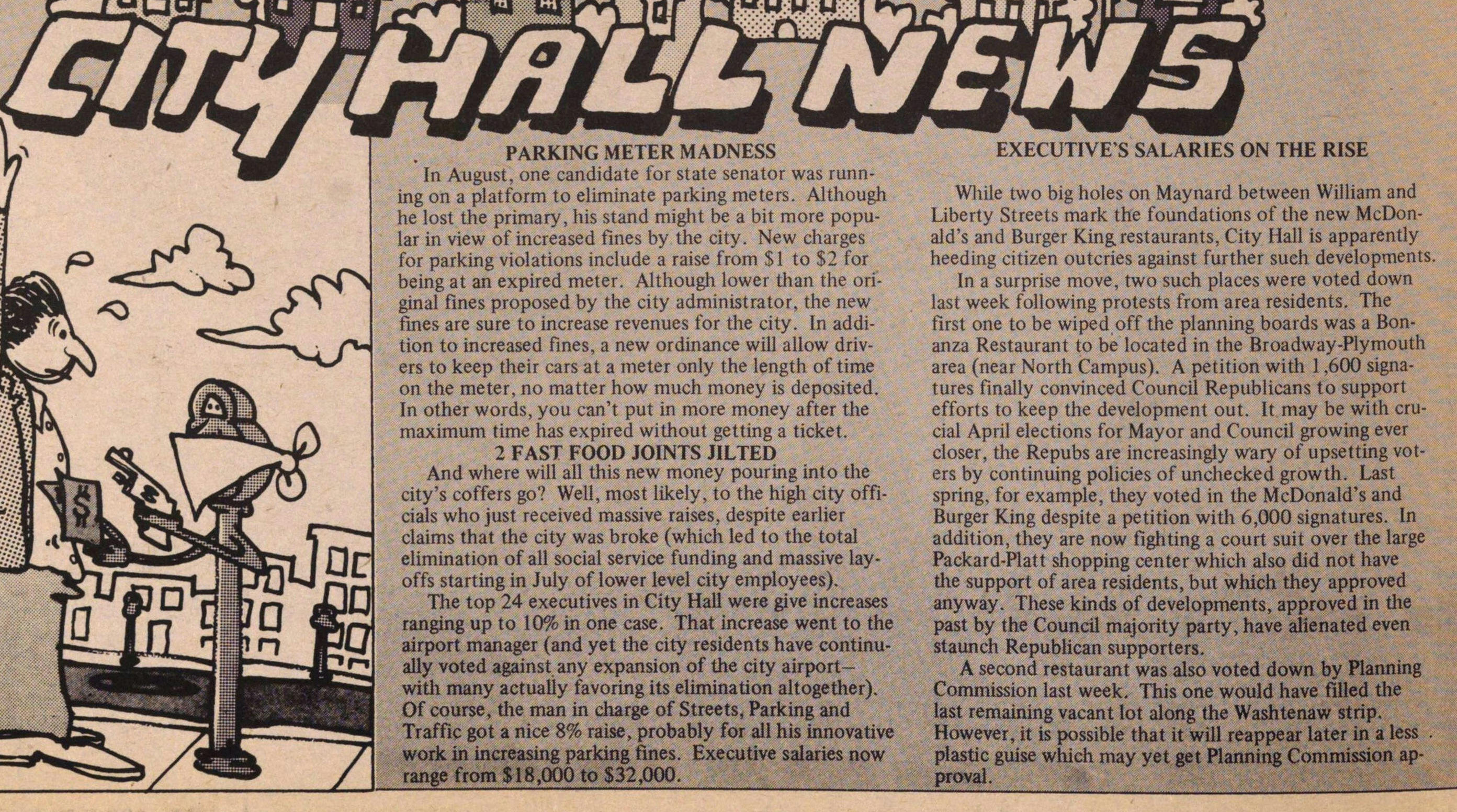 PARKING METER MADNESS In August, one candidate for state senator was running on a platform to elimínate parking meters. Although he lost the primary, his stand might be a bit more popular in view of increased fines by the city. New charges for parking violations include a raise f rom $1 to $2 for being at an expired meter. Although lower than the original fines proposed by the city administrator, the new fines are sure to increase revenues for the city. In addition to increased fines, a new ordinance will allow drivers to keep their cars at a meter only the length of time on the meter, no matter how much money is deposited. In othei words, you can't put in more money after the maximum time has expired without getting a ticket. 2 F AST FOOD JOINTS JILTED And where will all this new money pouring into the city's coffers go? Well, most likely, to the high city officials who just received massive raises, despite earlier claims that the city was broke (which led to the total elimination of all social service funding and massive layoffs starting in July of lower level city employees). The top 24 executives in City Hall were give increases ranging up to 10% in one case. That increase went to the airport manager (and yet the city residents have continually voted against any expansión of the city airport- with many actuaÜy favoring its elimination altogether). Of course, the man in charge of Streets, Parking and Traffic got a nice 8% raise, probably for all his innovative work in increasing parking fines. Executive salaries now range from $18,000 to $32,000. EXECUTIVE'S SALARIES ON THE RISE While two big holes on Maynard between William and Liberty Streets mark the foundations of the new McDonald's and Burger King. restaurants, City Hall ís apparently heeding citizen outcries against further sueh developments. In a surprise move, two such places were voted down last week following protests from area residents. The first one to be wiped off the planning boards was a Bonanza Restaurant to be located in the Broadway-Plymouth area (near North Campus). A petition with 1 ,600 signatures finally convinced Council Republicans to support efforts to keep the development out. It may be with crucial April elections for Mayor and Council growing ever closer, the Repubs are increasingly w'ary of upsetting voters by continuing policies of unchecked growth. Last spring, for example, they voted in the McDonald's and Burger King despite a petition with 6,000 signatures. In addition, they are now fighting a court suit over the large Packard-Platt shopping center which also did not have the support of area residents, but which they approved any way. These kinds of developments, approved in the past by the Council majority party, have alienated even staunch Republican supporters. A second restaurant was also voted down by Planning Commission last week. This one would have fïiled the last remaining vacant lot along the Washtenaw strip. However, it is possible that it will reappear later in a less . plastic guise which may yet get Planning Commission approval.