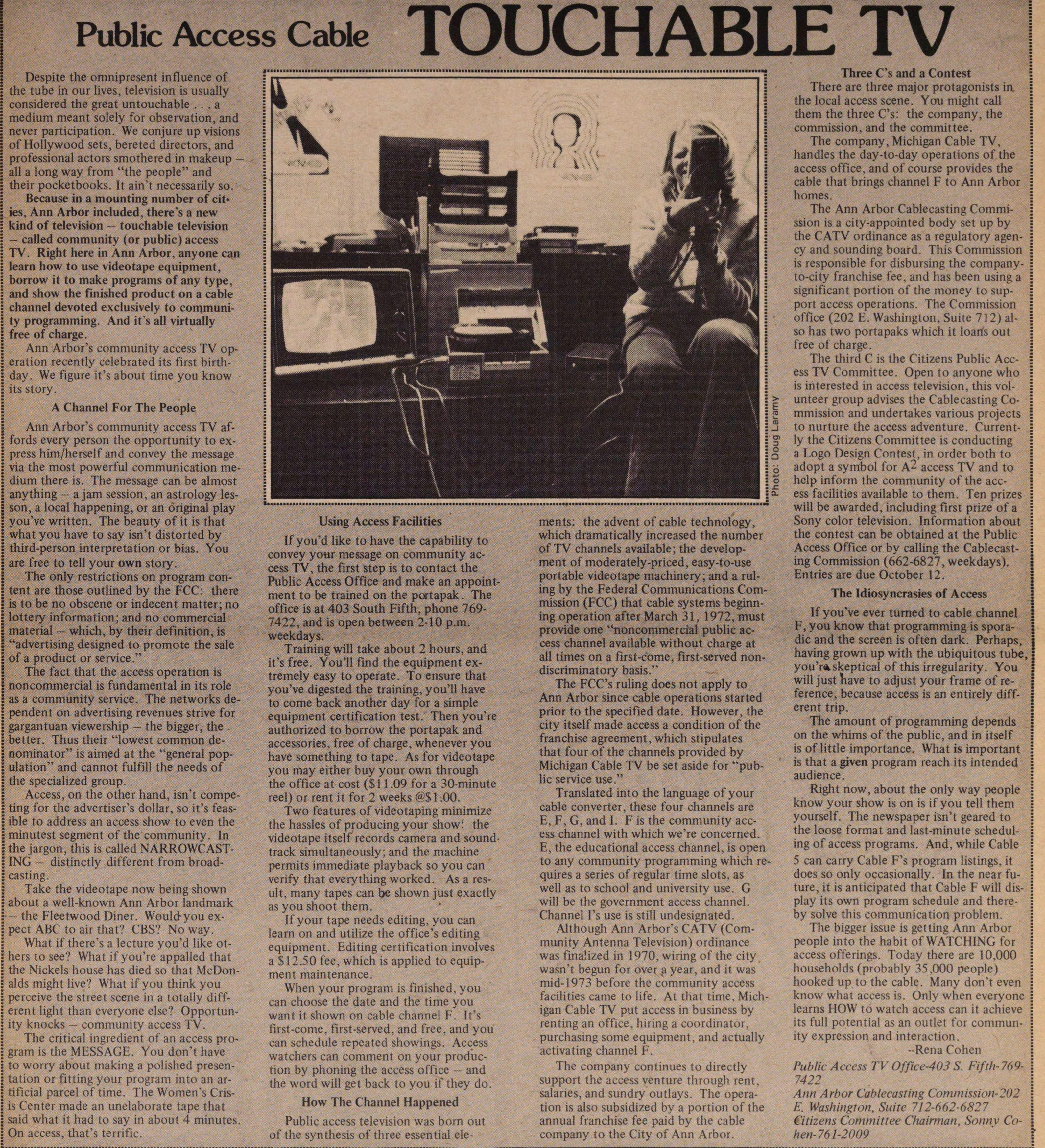 Despite the omnipresent influence of the tube in our lives, television is usually considered the great untouchable . . . a medium meant solely for observation, and never participation. We conjure up visions of Hollywood sets, bereted directors, and professional actors smothered in makeup - all a long way from "the people" and their pocketbooks. It ain't necessarily so.

Because in a mounting number of cities, Ann Arbor included, there's a new kind of television - touchable television - called community (or public) access TV. Right here in Ann Arbor, anyone can learn how to use videotape equipment, borrow it to make programs of any type, and show the finished product on a cable channel devoted exclusively to community programming. And it's all virtually free of charge.

Ann Arbor's community access TV operation recently celebrated its first birthday. We figure it's about time you know its story.

A Channel For The People

Ann Arbor's community access TV affords every person the opportunity to express him/herself and convey the message via the most powerful communication medium there is. The message can be almost anything - a jam session, an astrology lesson, a local happening, or an original play you've written. The beauty of it is that what you have to say isn't distorted by a third-person interpretation or bias. You are free to tell your own story.

The only restrictions on program content are those outlined by the FCC: there is to be no obscene or indecent matter; no lottery information; and no commercial material - which, by their definition, is "advertising designed to promote the sale of a product or service."

The fact that the access operation is noncommercial is fundamental in its role as a community service. The networks dependent on advertising revenues strive for gargantuan viewership - the bigger, the better. Thus their "lowest common denominator" is aimed at the "general population" and cannot fulfill the needs of the specialized group.

Access, on the other hand, isn't competing for the advertiser's dollar, so it's feasible to address an access show to even the minutest segment of the community. In the jargon, this is called NARROWCASTING - distinctly different from broadcasting.

Take the videotape now being shown about a well-known Ann Arbor landmark - the Fleetwood Diner. Would you expect ABC to air that? CBS? No way.

What if there's a lecture you'd like others to see? What if you're appalled that the Nickels house has died so that McDonalds might live? What if you think you perceive the street scene in a totally different light than everyone else? Opportunity knocks - community access TV.

The critical ingredient of an access program is the MESSAGE. You don't have to worry about making a polished presentation or fitting your program into an artificial parcel of time. The Women's Crisis Center made an unelaborate tape that said what it had to say in about 4 minutes. On access, that's terrific.

If you'd like to have the capability to convey your message on community access TV, the first step is to contact the Public Access Office and make an appointment to be trained on the portapak. The office is at 403 South Fifth, phone 769-7422, and is open between 2-10 p.m. weekdays.

Training will take about 2 hours, and it's free. You'll find the equipment extremely easy to operate. To ensure that you've digested the training, you'll have to come back another day for a simple equipment certification test. Then you're authorized to borrow the portapak and accessories, free of charge, whenever you have something to tape. As for videotape you may either buy your own through the office at cost ($11.09 for a 30-minute reel) or rent it for 2 weeks @ $1.00.

Two features of videotaping minimize the hassles of producing your show: the videotape itself records camera and soundtrack simultaneously; and the machine permits immediate playback so you can verify that everything worked. As a result, many tapes can be shown just exactly as you shoot them.

If your tape needs editing, you can learn on and utilize the office 's editing equipment. Editing certification involves a $12.50 fee, which is applied to equipment maintenance.

When your program is finished. you can choose the date and the time you want it shown on cable channel F. It's first-come, first-served, and free, and you can schedule repeated showings. Access watchers can comment on your production by phoning the access office - and the word will get back to you if they do.

How The Channel Happened

Public access television was born out of the synthesis of three essential elements: the advent of cable technology, which dramatically increased the number of TV channels available; the development of moderately-priced, easy-to-use portable videotape machinery; and a ruling by the Federal Communications Commission (FCC) that cable systems beginning operation after March 31, 1972, must provide one "noncommercial public access channel available without charge at all times on a first-come, first-served nondiscriminatory basis."

The FCC's ruling does not apply to Ann Arbor since cable operations started prior to the specified date. However, the city itself made access a condition of the franchise agreement, which stipulates that four of the channels provided by Michigan Cable TV be set aside for "public service use."

Translated into the language of your cable converter, these four channels are E, F, G, and I. F is the community access channel with which we're concerned. E, the educational access channel, is open to any community programming which requires a series of regular time slots, as well as to school and university use. G will be the government access channel. Channel I's use is still undesignated.

Although Ann Arbor’s CATV (Community Antenna Television) ordinance was finalized in 1970, wiring of the city wasn't begun for over a year, and it was mid-1973 before the community access facilities came to life. At that time, Michigan Cable TV put access in business by renting an office, hiring a coordinator, purchasing some equipment, and actually activating channel F.

The company continues to directly support the access venture through rent, salaries, and sundry outlays. The operation is also subsidized by a portion of the annual franchise fee paid by the cable company to the City of Ann Arbor.

Three C's and a Contest

There are three major protagonists in the local access scene. You might call them the three C's: the company, the commission, and the committee.

The company, Michigan Cable TV, handles the day-to-day operations of the access office, and of course provides the cable that brings channel F to Ann Arbor homes.

The Ann Arbor Cablecasting Commission is a city-appointed body set up by the CATV ordinance as a regulatory agency and sounding board. This Commission is responsible for disbursing the company-to-city franchise fee, and has been using a significant portion of the money to support access operations. The Commission office (202 E. Washington, Suite 712) also has two portapaks which it loans out free of charge.

The third C is the Citizens Public access TV Committee. Open to anyone who is interested in access television, this volunteer group advises the Cablecasting Commission and undertakes various projects to nurture the access adventure. Currently the Citizens Committee is conducting a Logo Design Contest, in order both to adopt a symbol for A2 access TV and to help inform the community of the access facilities available to them. Ten prizes will be awarded, including first prize of a Sony color television. Information about the contest can be obtained at the Public Access Office or by calling the Cablecasting Commission (662-6827, weekdays). Entries are due October 12.

If you've ever turned to cable channel F, you know that programming is sporadic and the screen is often dark. Perhaps, having grown up with the ubiquitous tube, you're skeptical of this irregularity. You will just have to adjust your frame of reference, because access is an entirely different trip.

The amount of programming depends on the whims of the public, and in itself is of little importance. What is important is that a given program reach its intended audience.

Right now, about the only way people know your show is on is if you tell them yourself. The newspaper isn't geared to the loose format and last-minute scheduling of access programs. And, while Cable 5 can carry Cable F's program listings, it does so only occasionally. In the near future, it is anticipated that Cable F will display its own program schedule and thereby solve this communication problem.

The bigger issue is getting Ann Arbor people into the habit of WATCHING for access offerings. Today there are 10,000 households (probably 35,000 people) hooked up to the cable. Many don't even know what access is. Only when everyone learns HOW to watch access can it achieve its full potential as an outlet for community expression and interaction.