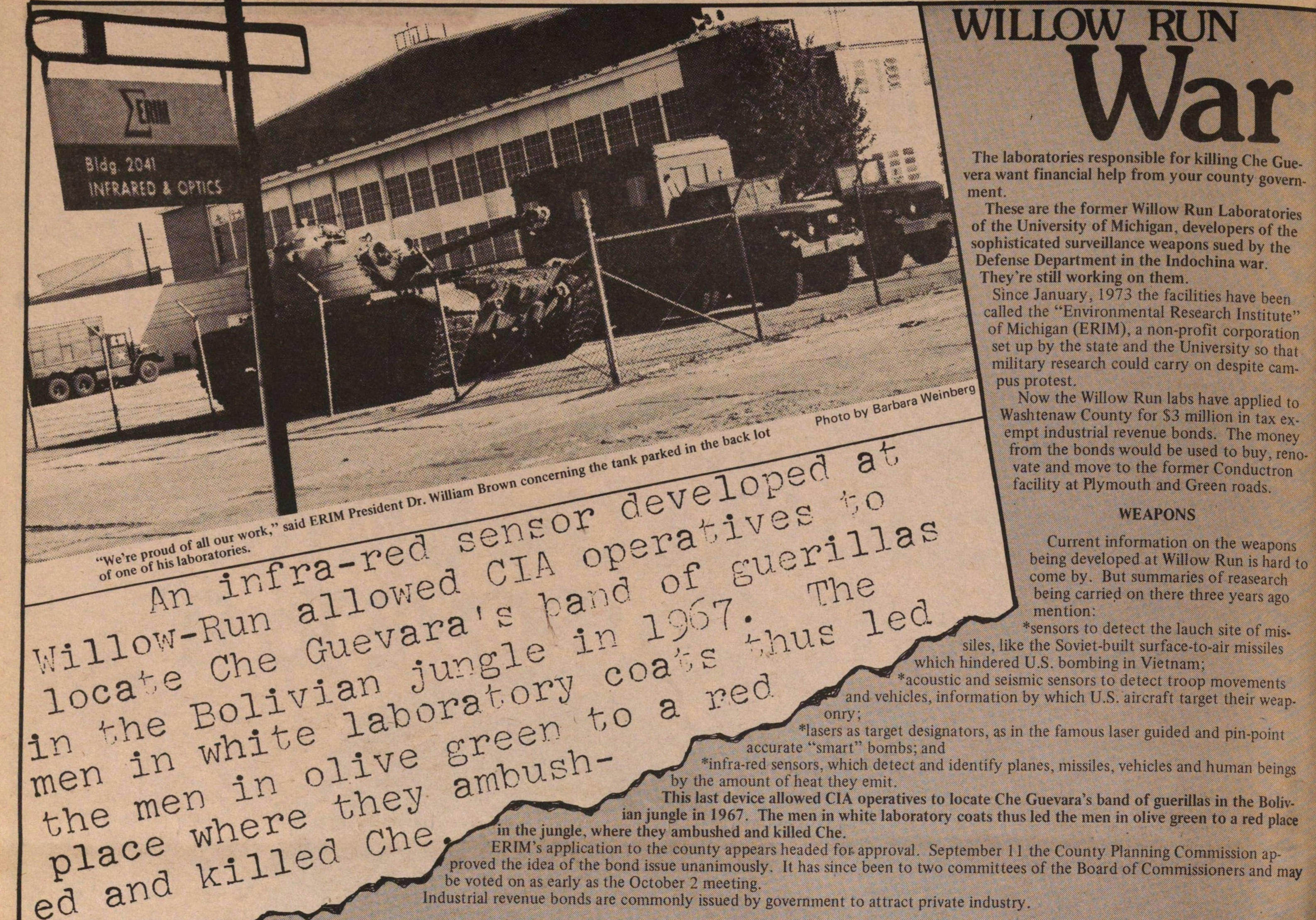 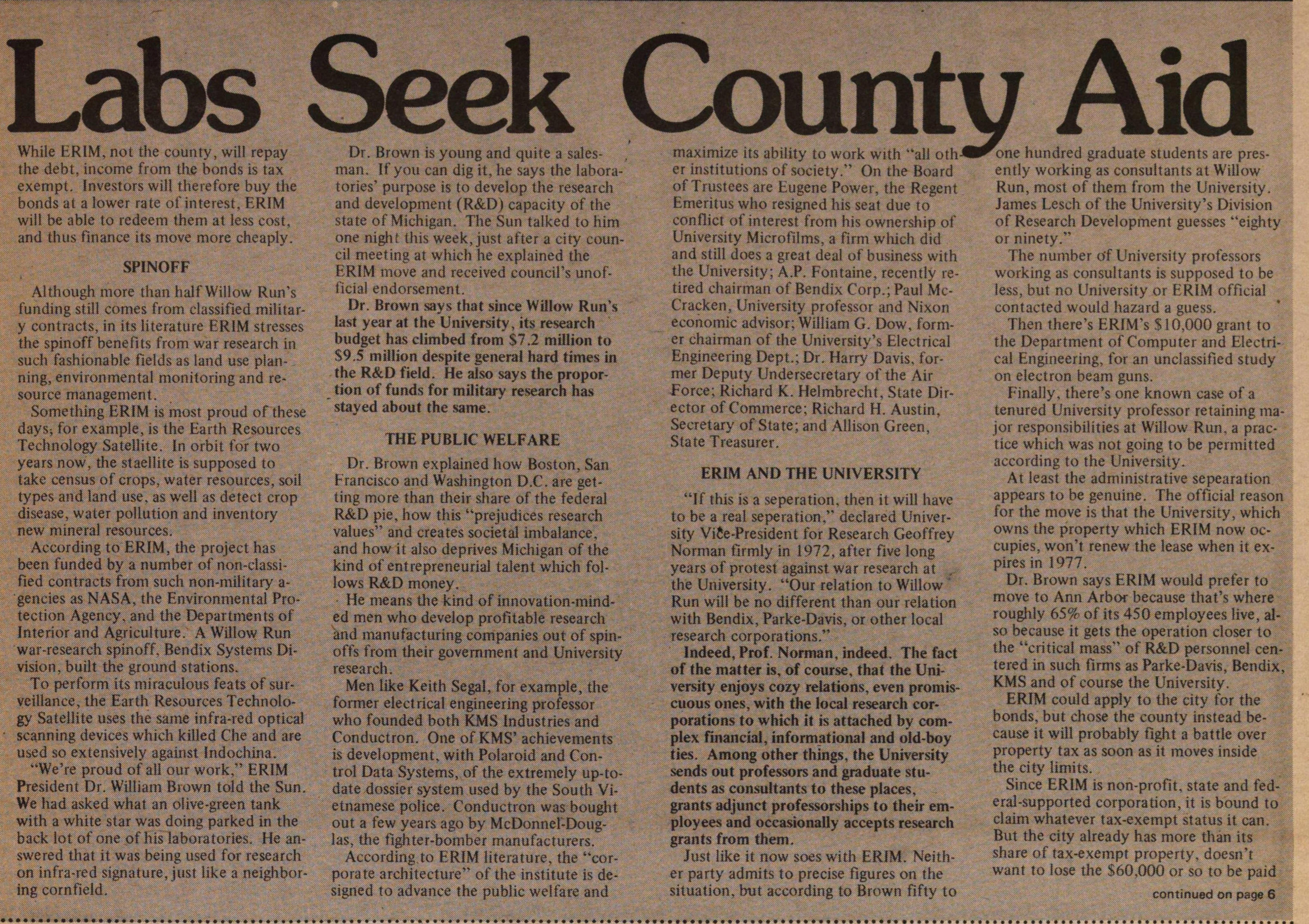 These are the former Willow Run Laboratories of the University of Michigan, developers of the sophisticated surveillance weapons used by the Defense Department in the Indochina war. They're still working on them.

Since January, 1973 the facilities have been called the "Environmental Research Institute" of Michigan (ERIM), a non-profit corporation set up by the state and the University so that, military research could carry on despite campus protest.

Now the Willow Run labs have applied to Washtenaw County for $3 million in tax exempt industrial revenue bonds. The money from the bonds would be used to buy, renovate and move to the former Conductron facility at Plymouth and Green roads.

Current information on the weapons being developed at Willow Run is hard to come by. But summaries of research being carried on there three years ago mention: *sensors to detect the launch site of missiles, like the Soviet-built surface-to-air missiles which hindered U.S. bombing in Vietnam;  *acoustic and seismic sensors to detect troop movements and vehicles, information by which U.S. aircraft target their weaponry; *lasers as target designators, as in the famous laser guided and pin-point accurate "smart" bombs; and *infra-red sensors, which detect and identify planes, missiles, vehicles and human beings by the amount of heat they emit.

This last device allowed CIA operatives to locate Che Guevara's band of guerillas in the Bolivian jungle in 1967. The men in white laboratory coats thus led the men in olive green to a red place in the jungle where they ambushed and killed Che.

ERIM's application to the county appears headed for approval. September 11 the County Planning Commission approved the idea of the bond issue unanimously. It has since been to two committees of the Board of Commissioners and may be voted on as early as the October 2 meeting.

Industrial revenue bonds are commonly issued by government to attract private industry.  While ERIM, not the county, will repay the debt, income from the bonds is tax exempt. Investors will therefore buy the bonds at a lower rate of interest, ERIM will be able to redeem them at less cost, and thus finance its move more cheaply.

Although more than half Willow Run's funding still comes from classified military contracts, in its literature ERIM stresses the spin-off benefits from war research in such fashionable fields as land use planning, environmental monitoring and resource management.

Something ERIM is most proud of these days, for example, is the Earth Resources Technology Satellite. In orbit for two years now, the satellite is supposed to take census of crops, water resources, soil types and land use, as well as detect crop disease, water pollution and inventory new mineral resources.

According to ERIM, the project has been funded by a number of non-classified contracts from such non-military agencies as NASA, the Environmental Protection Agency, and the Departments of Interior and Agriculture. A Willow Run war-research spin-off, Bendix Systems Division, built the ground stations.

To perform its miraculous feats of surveillance, the Earth Resources Technology Satellite uses the same infra-red optical scanning devices which killed Che and are used so extensively against Indochina.

"We're proud of all our work," ERIM President Dr. William Brown told the Sun. We had asked what an olive-green tank with a white star was doing parked in the back lot of one of his laboratories. He answered that it was being used for research on infra-red signature, just like a neighboring corn field.

Dr. Brown is young and quite a salesman. If you can dig it, he says the laboratories' purpose is to develop the research and development (R&D) capacity of the state of Michigan. The Sun talked to him one night this week, just after a city council meeting at which he explained the ERIM move and received council's unofficial endorsement.

Dr. Brown says that since Willow Run's last year at the University, its research budget has climbed from $7.2 million to $9.5 million despite general hard times in the R&D field. He also says the proportion of funds for military research has stayed about the same.

Dr. Brown explained how Boston, San Francisco and Washington D.C. are getting more than their share of the federal R&D pie, how this "prejudices research values" and creates societal imbalance, and how it also deprives Michigan of the kind of entrepreneurial talent which follows R&D money.

He means the kind of innovation-minded men who develop profitable research and manufacturing companies out of spin-offs from their government and University research.

Men like Keith Segal, for example, the former electrical engineering professor who founded both KMS Industries and Conductron. One of KMS' achievements is development, with Polaroid and Control Data Systems, of the extremely up-to-date dossier system used by the South Vietnamese police. Conductron was bought out a few years ago by McDonnel-Douglas, the fighter-bomber manufacturers.

According to ERIM literature, the "corporate architecture" of the institute is designed to advance the public welfare and maximize its ability to work with "all other institutions of society." On the Board of Trustees are Eugene Power, the Regent Emeritus who resigned his seat due to conflict of interest from his ownership of University Microfilms, a firm which did and still does a great deal of business with the University; A.P. Fontaine, recently retired chairman of Bendix Corp.; Paul McCracken, University professor and Nixon economic advisor; William G. Dow, former chairman of the University's Electrical Engineering Dept.; Dr. Harry Davis, former Deputy Undersecretary of the Air Force; Richard K. Helmbrecht, State Director of Commerce; Richard H. Austin, Secretary of State; and Allison Green, State Treasurer.

ERIM AND THE UNIVERSITY

"If this is a separation, then it will have to be a real separation," declared University Vice-President for Research Geoffrey Norman firmly in 1972, after five long years of protest against war research at the University. "Our relation to Willow Run will be no different than our relation with Bendix, Parke-Davis, or other local research corporations."

Indeed, Prof. Norman, indeed. The fact of the matter is, of course, that the University enjoys cozy relations, even promiscuous ones, with the local research corporations to which it is attached by complex financial, informational and old-boy ties. Among other things, the University sends out professors and graduate students as consultants to these places, grants adjunct professorships to their employees and occasionally accepts research grants from them.

Just like it now does with ERIM. Neither party admits to precise figures on the situation, but according to Brown fifty to one hundred graduate students are presently working as consultants at Willow Run, most of them from the University. James Lesch of the University's Division of Research Development guesses "eighty or ninety."

The number of University professors working as consultants is supposed to be less, but no University or ERIM official contacted would hazard a guess.

Then there's ERIM"s $10,000 grant to the Department of Computer and Electrical Engineering, for an unclassified study on electron beam guns.

Finally, there's one known case of a tenured University professor retaining major responsibilities at Willow Run, a practice which was not going to be permitted according to the University.

At least the administrative separation appears to be genuine. The official reason for the move is that the University, which owns the property which ERIM now occupies, won't renew the lease when it expires in 1977.

Dr. Brown says ERIM would prefer to move to Ann Arbor because that's where roughly 65% of its 450 employees live, also because it gets the operation closer to the "critical mass" of R&D personnel centered in such firms as Parke-Davis, Bendix, KMS and of course the University.

ERIM could apply to the city for the bonds, but chose the county instead because it will probably fight a battle over property tax as soon as it moves inside the city limits.

Since ERIM is non-profit, state and federal -supported Corporation, it is bound to claim whatever tax-exempt status it can. But the city already has more than its share of tax-exempt property, doesn't want to lose the $60,000 or so to be paid continued on page 6